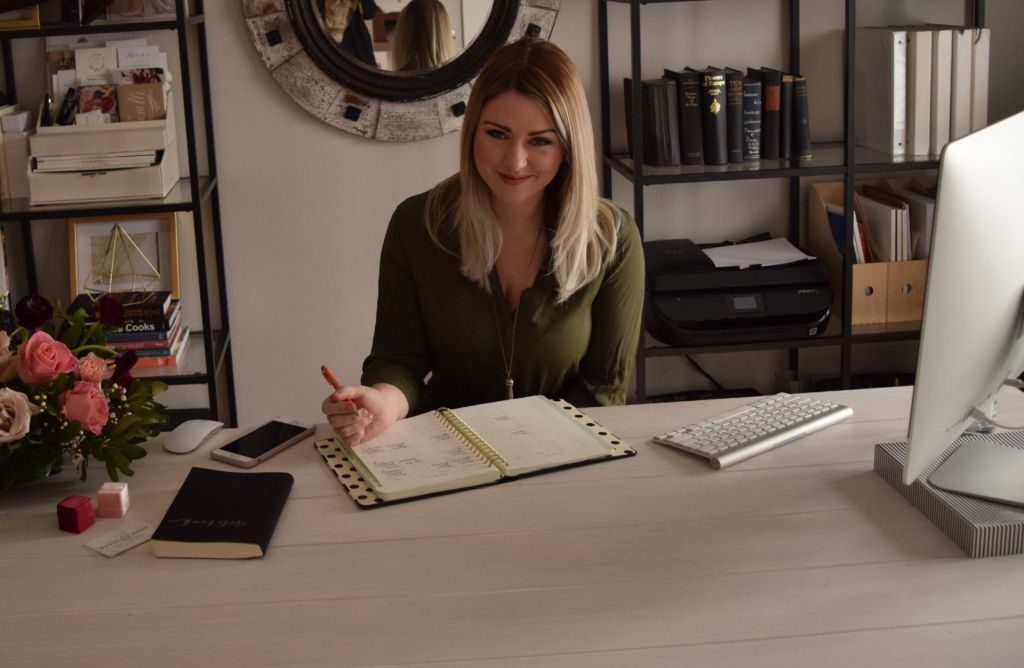 When Brittany Frid planned a recent wedding, she thought it would be a lovely touch to add a cultural element – a Chinese lantern. The couple would make a wish and light the candle inside the lantern, which would soar away into the sky, symbolic of their dreams for their future together.

Little did she know, the bride, all adorned in flowing tulle, would have difficulty lighting it without her dress getting in the way. After a few trials and errors, eventually the fire caught. The entire lantern. And it blew down the street, a big ball of fire, rolling in flames, while she chased after it, worried that it would roll into someone’s backyard.

To Frid, her mistakes, like this one, are opportunities for her to learn how to do things differently in the future and she credits those errors for the growth and success she has had since she started her wedding planning business five years ago.

“I make one big mistake a year,” Frid says at her large desk in her home office. Like the rest of the office, it is immaculate and sparsely decorated with a feminine-minimal aesthetic: a floral arrangement, her business cards, a computer and a couple of Kate Spade agendas.

Her office reflects the kind of wedding design she does. Lots of white and muted pinks, flowers in creamy vases and lots of behind the scenes organization.

Satin and Snow initially began as a blog Frid created to work on outside the hours she spent full-time in a law firm. She graduated from Algonquin’s law clerk program in 2012, but soon realized she enjoyed design much more.

“I was never into weddings, never wanted to get married, never had any interest in the girly stuff like that, but I’ve always been a very, very creative person,” Frid says.

When a co-worker at the law firm was soon to be married and had no vision of how she should design her wedding, Frid tasked herself with looking up inspiration to help her friend.

At a time when Pinterest was just getting popular, Frid discovered a lack in the market of wedding planning in Ottawa.

The designs that most intrigued and inspired her were the ones she saw online from Europe and the US – the kind of aesthetic that Ottawa wedding planners just didn’t offer at the time, she says.

She would look through different wedding blogs, falling in love with all the photography.

“But all the photography that I’d seen [in Ottawa] was really modern and edgy with weird lighting — and it was dark and interesting — but it wasn’t light and airy and feminine like all these fine art photographers I was seeing throughout every other place in the world.”

It started with her own blog, where she would feature all these different weddings from around the world.

“And it really just took off from there,” Frid says.

People started to submit their own weddings if it had a similar aesthetic, she gained some advertisers and then started getting submissions from all across the world.

“Then I started to get job offers just falling into my lap and one of them was for an assistant wedding planner position,” she says.

She accepted, while she was still working at the law firm, worked both jobs for one wedding season, and then six months later she started her own company.

Although she took a two day course through the Wedding Planners Institute of Canada to get certification as a wedding planner, Frid thinks formal education is unnecessary. She taught herself much of what she knows about running a business and planning weddings, and really believes hands-on experience and being your own teacher is the best way to learn.

“Patience has been my biggest issue,” Frid says. “I want to get a lot done.”

Her day starts off by going through emails and organizing her time.

“I have more calendars and task lists than anybody,” Frid says, laughing. “And I have a planning software that keeps track of pretty much everything that is happening on every file.”

She does get some help though now. As a small business, Satin and Snow works with independent contractors — typically up to fourteen people during the wedding season. She also has one to two wedding planners help her out during the rest of the year and has one permanent assistant in Syracuse who does mainly administrative work.

Even some of her past clients have worked with her at various times.

Stephanie Snetsinger’s wedding was in August 2015, which was planned and designed by Satin and Snow. And then Snetsinger first started working there as a wedding coordinator assistant in June 2016.

“Working with her is never a dull moment,” Snetsinger says.

She has helped with rehearsals, florals and assisting with coordinating actual wedding days.

“I believe Satin and Snow offers couples a very fresh and high end design while focusing on the couple’s most personal aspects to pull it all together,” Snetsinger says. “Brittany is not traditional at all. She has such a whimsical view on what a wedding should be. Soft, intimate… Vogue meets fairytale. Her passion shines through every aspect of the wedding process.”

So far, Frid says, Satin and Snow has fifty weddings under its belt and about thirty more booked for this year.

A tip she has learned from her own experience as an entrepreneur is that you have to “charge hard” and persevere if you want to go after something.

“Always setting really clear goals, no matter how lofty, and always working toward them – not being deterred by hiccups, not getting bogged down by the minutia — know that those things are still pushing you toward the right goals,” Frid says.