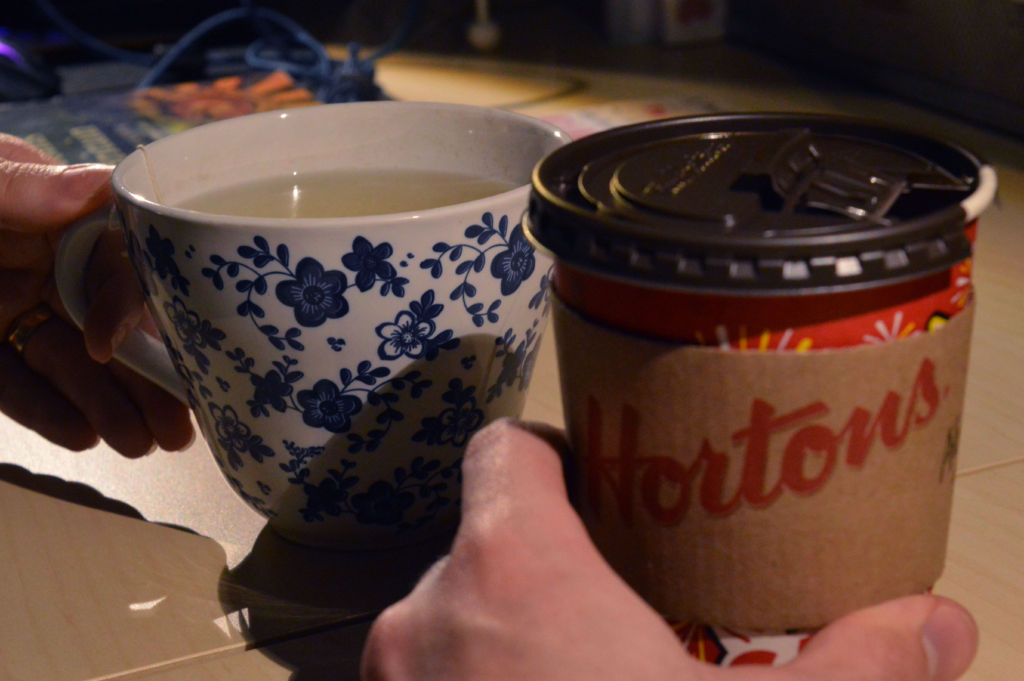 Winter. A cold season. It’s the morning, and you go to your favourite café. What do you order? Coffee or tea?

For many, it’s an easy answer. But why? What drives people towards their favourite beverage? The answer, unsurprisingly, is not easy.

Heather Powell, 33, is the manager of Caffeine 1UP. It’s a small coffee house on Rideau Street. It is different from most cafés, as they have game consoles that you can use for a small fee when you’re enjoying your favourite brew. It still primarily serves as a place for people to get their coffee. Powell says that her clientele consists of at least 80 per cent coffee drinkers.

She said the role of cafés themselves has changed in the past years, and now people treat them more as work spaces or study spaces, but most of them still treat the coffee as their daily pick-me-up.

Katrina Carbone, 20, a social science student at the University of Ottawa, chooses coffee in the morning. “I don’t really like the taste of tea,” she says. “I use coffee most as a means to wake up in the morning.”

Jeff Duong, 18, a chemical engineering student at the University of Ottawa, doesn’t drink much of either, but still considers himself a coffee person.

“I think some people like tea because they think it is healthier,” he says. “It doesn’t wake me up as much as coffee, and sometimes I need the coffee for exams or for last minute studying sessions.” He said with a smile. “But I usually make it at home.”

Tea, on the other hand, seems to serve a different purpose. Although they’re usually compared, and in places like India or the United Kingdom people use tea as a morning drink, in Ottawa it doesn’t appear to have the same role.

“I don’t get much tea drinkers in the morning, it’s just a small percentage of people that come for a coffee on the go,” says Christine Fletcher, 26, owner of The Tea Party, a tea room on York Street. “I get around 20 per cent of people that come to us to get some coffee, and they all leave afterwards.”

But the purpose of a tea room is, of course, to serve tea. “I get a lot of college students, especially females, that come here in the afternoon, from one to four,” she says.

“They all come for tea, and I can usually guess what they will take from how they look. The tea you like is often reflected by how you look or how you were raised. Most people have their favourite tea and they stick to it.”

The way people drink tea seems to be very different from coffee. “Besides a person or two, most people drink teas with low caffeine, because they had a coffee in the morning,” says Fletcher.

Carolyn Simon, 23, a linguistics student at Carleton University, is one such person.

“Drinking tea is very social,” she says. “Kind of like beer but non-alcoholic. It’s a drink you share with others. I’m very open minded when it comes to tea, but I always go for sweet teas, but not the berry kind.”

Melo Graffith, 22, a music student at Carleton, would like to be counted among the ranks of tea drinkers.

“I’d like to prefer tea to coffee, but it’s hard,” he says. “I drank coffee most of my life, and sometimes I miss it if I don’t drink it.”

He doesn’t believe in the difference between tea people and coffee people, beside one thing. “The jitters. All coffee drinker are nervous,” he says.

So, next time you find yourself at a counter, and ask yourself what you want, think also about the situation you’re in. Do you need to feel a bit more awake, and have that instant energy, or do you want to take a moment and relax, drinking away the cold of winter?