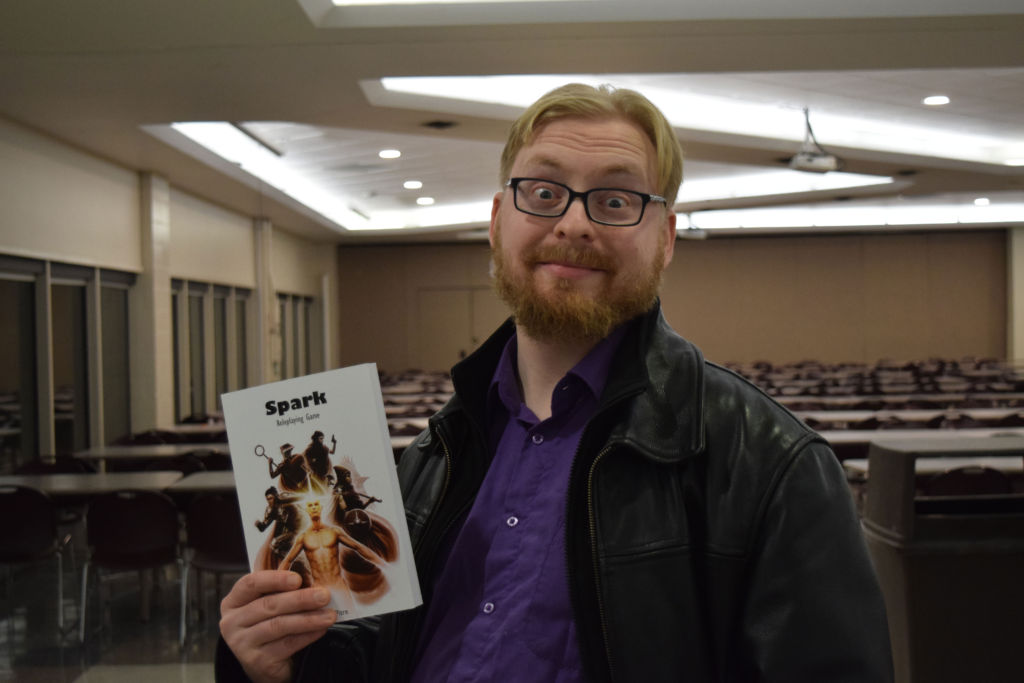 Genesis of Legend Publishing is a company that makes tabletop roleplaying games here in Ottawa – and it’s a one-man show. Jason Pitre is the heart, brains and muscle of the company. He designs, writes and publishes his own games.

When he was in high school, he’d casually play RPGs like Dungeons and Dragons with friends. But as his interests grew, he became interested in how he could put his own spin on the games he played.

Tabletop RPGs often manifest as books or booklets that explain the rules of play and provide context for the universe the game is set in. A game master is someone who prepares a campaign – a story for their friends to enjoy – that fits the parameters of the source material. Outcomes of decisions made by players are determined by dice and the summed value of the dice is interpreted by tables in the book.

Pitre sums it up as a medium of long-form improvisation and creative writing.

“Kids tell stories and make up games all the time,” says Pitre. “The rolls of dice in roleplaying games are the objective judicators of their stories.”

Pitre is a wildlife biologist with the Canadian Wildlife Service, and started this company purely as a passion project. For him, it was simply the next step in his appreciation and understanding of tabletop RPGs.

Currently, there’s a resurgence in the popularity of these kinds of games, so Pitre used crowdfunding to help finance this endeavor. Using the crowdfunding website, Kickstarter, Pitre set a goal of $4,000 USD for a for a game he wanted to design called Spark. The campaign was one month long and was backed by 475 people, raising $11,668 USD – well over his request.

Seeing such a surplus of funding allows Pitre to have a rough estimate for the demand for a game. Spark, gained three times as much money as he needed, so he had an idea of how many games to print. Whereas his next project, Posthuman Pathways, was funded by 225 backers and made $2,806, marginally above his goal of $2,500. This let him know to print significantly fewer copies of the game as demand was lower.

Having this data not only lets him gauge how many people want his game but also how to allocate resources, financially. Pitre does a lot of legwork through the actual design of a game’s systems and world, but he still needs the help of others for the production and publishing of his ideas.

The production of the game requires proficient technical writing. The rules of these games need to be interesting while also ensuring that the systems of play are explained succinctly and clearly. Pitre hires editors to look over his work and make sure nothing is convoluted.

His product needs to be tested for clarity, but also for how the systems he designed intertwine. So, he sometimes hires playtesters to help him refine and iterate his craft. He’s also in contact with a network of volunteer playtesters throughout the UK and Australia, and will even offer the game to be tested by fans and fellow designers at conventions.

A lot of the money he raises through crowdfunding also goes to freelancers who will work on the visual aspects of his game, such as layout, art and graphic design. He’s also taught himself graphic design and did all the graphics for Spark.

Pitre says he uses Kickstarter since the funding is available immediately, and allows him to gauge demand for his games. Still, he acknowledges the risks involved.

“Crowdfunding is like getting a loan with your reputation as capital,” says Pitre.

From a Canadian perspective Kickstarter itself has some problems, says Pitre. When it first started it wasn’t available in Canada and all the funding and transactions had to go through in USD. When it finally came to Canada, the value of the Canadian dollar fell. Compounding these issues, shipping costs for the USA skyrocketed after funding for Spark was complete. Pitre had to pay the difference out of pocket.

It took Pitre four years to create his first game, Spark, but he says he’s getting faster and better at designing and publishing games now.

Publishing these games isn’t the most lucrative project for Pitre. So, he still depends on his day job, which he says he enjoys thoroughly. But he hopes to start making more money through this passion project of his. Game design is often a side project for most people in the industry.

Right now, the success of each project simply helps fund the next.

His games are available for order at virtually every mainstream game or comic shop in Canada and the USA. Pitre is currently funding a combination of Spark and a supplementary text called Sig: The City Between. The compilation is called Sig: The Manual of the Primes, and is available through Kickstarter.