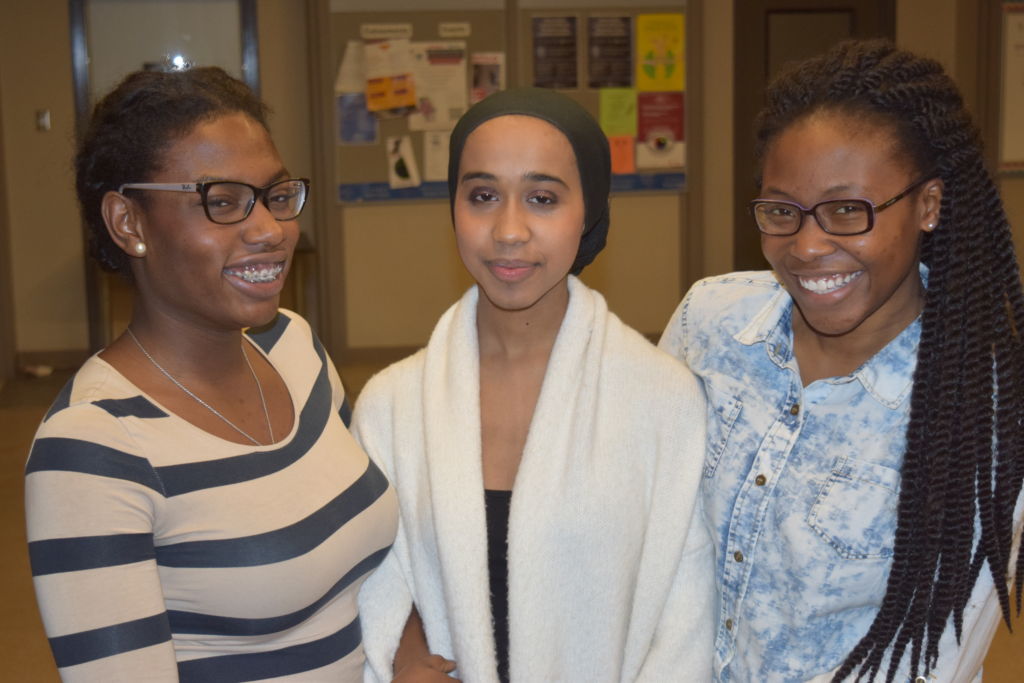 The executives of Black Students Leaders Association recommend attending Soulful Expressions if you are looking to celebrate or learn about black culture.
Photo by: Terry Bijojote

Lois Oladejo, co-president of the Black Students Leaders Association at the University of Ottawa (BSLA), sits on the floor, comfortably with her legs stretched and crossed, with a laptop on her lap. She documents the time to the second that each performer will take during Soulful Expressions, a night for black artists around the city to display their gifts. Soulful Expressions will take place on Thursday, Feb. 16 at the University of Ottawa’s Alumni Auditorium at 7:30 p.m.

During rehearsals, two poets appear before Oladejo, Sakinna Gairey and Naomie Joseph, the other BSLA executives. The first poet, Elodie Rothonca, goes up and starts a bit slow but as she finds her footing, she appears more energetic and confident in a poem about rape culture. Fingers snap. Oladejo stops the clock and notes the time it takes Rothonca to perform her poem. They discuss all the other logistics: sound, the show starting and closing time. The second poet appears confident and performs two poems, one about how depression is perceived within black culture and the other about the dangers of being a crowd-pleaser, Again, Oladejo stops the clock, notes the time and discusses the logistics.

“In February, we get to unapologetically flaunt our creativity and our strengths,” wrote Joseph, treasurer of BSLA, in an email. “One of the outlets to do so is Soulful Expressions, where we get to remind ourselves annually why we are the blueprint for greatness. We gather singers, dancers, poets and comedians who make us sing along, snap our fingers, nod our heads in agreement, laugh and cry together. Soulful Expressions is intimate, emotional and hype at the same damn time. It’s lit.”

Soulful Expressions is in its sixth year and it is an opportunity for black artists—current or former students— to highlight their abilities, says Gairey, co-president of the BSLA.

Regy de la Cruz-Abraham, 28, who goes by the stage name of Rejuno, is a former student of at the University of Ottawa who has been involved both as an organizer or a singer, with Soulful Expressions since it began.

He sings and writes songs who has not missed a show since the beginning of the event.

“I have been involved with Soulful Expressions since 2011,” says Cruz-Abraham. “I have been blessing the show since the third edition.”

Cruz-Abraham says that he is attached to Soulful Expressions because it’s another way to be proud and celebrate his culture.

“It’s always a time of reconnection for me,” he says. “It’s a time to celebrate the black skin and share our stories with one another.”

Cruz-Abraham says that stories shared during Soulful Expressions go a long way to ridding people of any prejudices that they might have toward black people.

Oladejo says that it would be ideal to have Soulful Expressions more than once a year but she is content with having it in the most significant month for black people: February, dubbed Black History Month.