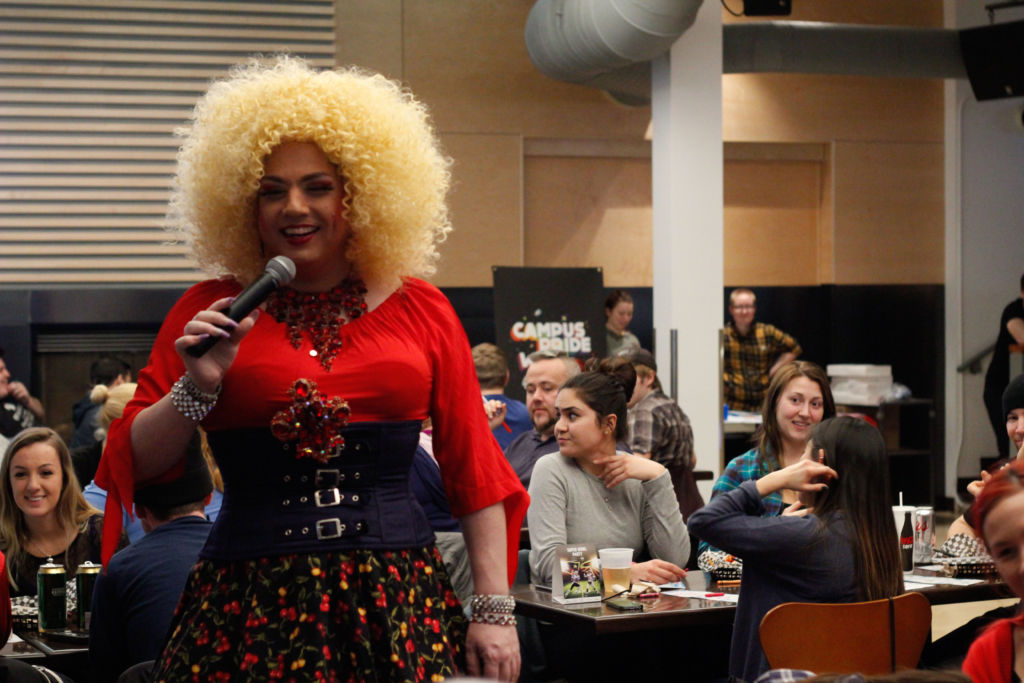 No student escapes Krystal Caring’s gaze as she walks around Algonquin College’s lounge, the Observatory, in high heels and a glamorous dress, encouraging everyone to let loose.

“Drink up, cause I get sexier as the night goes on,” Krystal teases the crowd.

On the first Wednesday of every month during the school year, Krystal and Zelda Marshall host a sold out Dirty Bingo night where students play a “skanked-up version of Bingo” for sex-toy prizes. But they only get the prize if they’re willing to yell out “Boner” instead of “Bingo!”

Krystal opens the night with a poll of the crowd that reveals relatively few Dirty Bingo virgins. Many have been here before and are coming back for more vulgar fun, a welcome relief from the stress of school life.

Krystal Caring’s drag name is a reflection of things that matter to her. “I tend to care a lot about my audiences,” says Krystal. She came up with her name with the help of her drag mother. They decided on the name Krystal because of her love of crystal jewellery.

Most drag queens get apprenticed into the craft by a drag mother, explains Zelda. “You approach an established drag queen and ask her to take you on as a daughter,” says Zelda. “She’ll coach you and guide you to your first high-heel steps on stage.”

Zelda came to drag because of her interest in the trans community, trans rights, and her love of music, theatre and dance. “It just seemed like a natural combination…a sort of synthesis of all my interests.”

Zelda has many roots in the drag queen community of Ottawa. She is a proud drag mother and drag grandmother. Some of her drag children are part of Ottawa’s first and only drag king group, Capital Kings. “I’ve had quite a productive lineage,” says Zelda.

Krystal has moved away from performing and entertaining at clubs. “The Ottawa drag scene is not as friendly and caring as it once was,” Krystal says.

The Ottawa clubs don’t have the budgets to support the drag community. “I always say it costs a lot of money to make a person look this cheap,” Krystal jokes. “I go through a pair of pantyhose each show.”

The shows at Algonquin do very well, however, and it gives them a chance to do charity work, which is not possible in the bars in Ottawa.

Krystal, who is an Algonquin graduate from the photography program uses her skills to produce calendars and magnets that she sells to raise money for charity.

She’s raised about $1,100 in the last three months for the Canadian Diabetes Association and is hoping to make it to $1,300 by the end of this season’s shows.