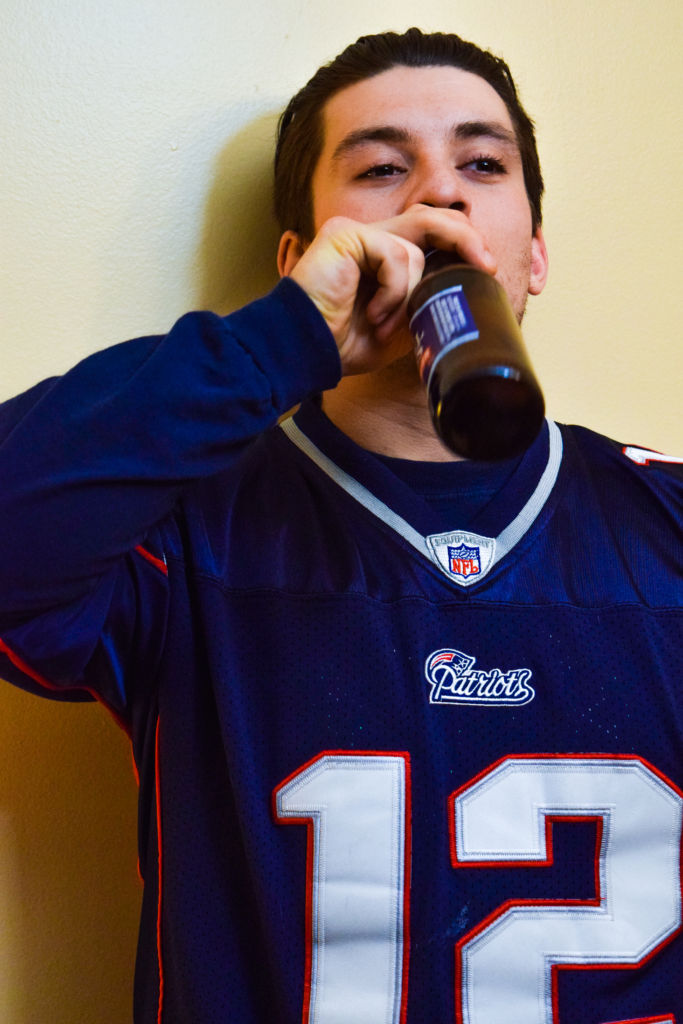 It’s that time of year again, when the beer flows like the St. Lawrence and nacho chips crunch against pools of guacamole.

The Super Bowl is upon us.

But outside the clamour of giveaways from CTV and Lady GaGa’s candlelit piano recital lie the people at home, in bars or out on the street, roaring with enthusiasm for their favourite team. Glue spoke to students in Ottawa to see what they’ve been up to for the Super Bowl.

You can assume there are some weirdos out there. Maybe some people with lucky socks and bizarre ritualistic behaviour. Well, that’s not quite the case here in Ottawa. Super Bowl traditions in Canada’s capital are relatively tame compared to our neighbours in the United States.

Food takes the place of a hearth this time of year. Alexander Faouaz, simply watches the game at his house with his friends. Ritualistically, Faouaz starts off the night by preparing ribs and watching pre-game discussion on TV. If anyone’s favourite team is competing for the Lombardi Trophy: it’s a night full of smack-talk and heated debate. Otherwise, Faouaz and his friends just have a good time watching two teams they don’t care about.

Like a lot of traditions, this annual habit of Faouaz is rooted in his childhood.

“When I was younger my mom would have this same setup. She never even paid attention to football. She just did it, and I decided to keep up that tradition,” says Faouaz.

Mackenzie Long left Ottawa to study kinesiology at Dalhousie University, so for the past four years he watched the Super Bowl with his friends at his house in Halifax. This year he’s back home, enjoying the Super Bowl just like he used to before he left.

Long would always watch from home with his family and friends, enjoying all the conveniences you wouldn’t get from a bar or restaurant.

“It’s comfy, you can skip commercials — especially the half-time show,” says Long. “You don’t have to keep ordering food either when it’s right around the corner.”

He’s been watching the Super Bowl since he was in elementary school. “Football’s tough,” says Long. “It’s really complicated for an eight-year-old kid. I watched it more because my dad would always have it on. I got a hang of it as I got older and started playing it.”

Long used to play for a local league as part of the Kanata Knights, but found his true passion in rugby when he started high school since his team comprised of his friends and classmates.

Brandon Roberson, a student of criminology at the University of Ottawa, also used to play football, but as a player with the Myers Riders. When he started playing the game he got a lot more a invested in the Super Bowl, and first watched the event seriously in 2013 when Baltimore Ravens went up against the San Francisco 49ers.

His most cherished memory of the Super Bowl was at that very same game. The lights in the stadium went out mid-game, but immediately after the 49ers started making a comeback against the Ravens. At the time, the 49ers were Robertson’s favourite team.

Faouaz’s favourite Super Bowl was when the Arizona Cardinals faces the Pittsburgh Steelers in 2009. He watched it at a friend’s house and found the match’s surprise twists in score really exciting. He says his friend’s parents made more than enough food and it was a dinner he’ll never forget.

While these Super Bowl memories are relatively recent, Long’s favourite takes the cake having only happened in 2015. It was the last play of the game, and the Seattle Seahawks were winning against the New England Patriots, the latter of which is the favourite of Long and his buddies. Everyone in the house had given up. His roommates were ready to turn in for the night and his invited guests heading out.

“They were waiting for a cab in the hallway while I’m still in my jersey, like a foot away from the TV,” says Long. “Patriots intercept the ball on the goal line and win the game out of nowhere. It was so rewarding.”

Long remembers first siding with the Patriots in 2001, when they played against the St. Louis Rams. It was the first time New England won the Super Bowl, and he’s been a fan ever since. He’s also a big fan of Patriot’s quarterback Tom Brady and his skill in the game.

With a laugh, Long admits the Patriots are a bit “sketchy.” He finds it all pretty funny but the Patriots have a rather suspect history of spying on opposing teams and deflating footballs. Faouaz, on the other hand, takes these controversies more seriously. He’s had no interest in the Patriots since the deflation scandal commonly known as ‘deflategate.’

After the Falcons were beating them 28-3 going into the fourth period, the Patriots quickly tied with them to start the first overtime in Super Bowl history. The Patriots beat them 34-28.