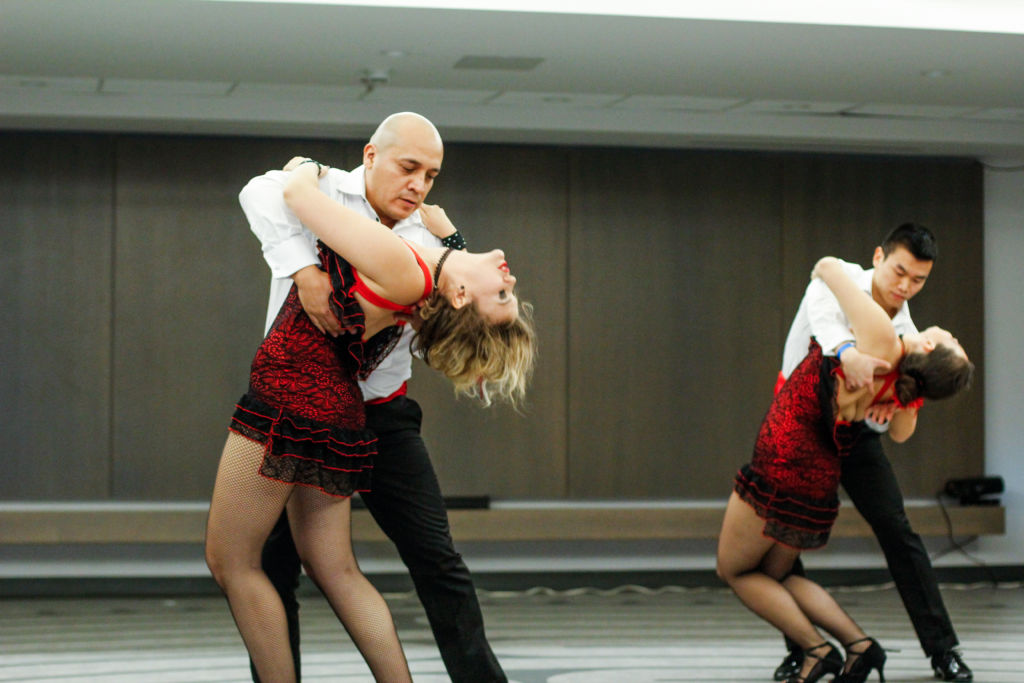 Gracefully sliding from left to right Jose-Lynne Desormeaux dances to the fiery and sensual latin beat in front of the cheering crowd. With her red mini-dress and energetic steps, the petite bachata dancer easily draws attention of the public.

It’s hard to believe that this agile woman, who goes by “Jojo” in dancing circles, is a grandmother.

By day she works for human resources and by night escapes into the dancing world, where she spends time with her sincere friends and true passion – performing.

“It releases stress from work, makes you think of breathing and having fun,” says Desormeaux. “Just let go and dance to the music.”

Stepping into the performing world at the age of 12 and trying her hand in many styles and genres including synchronized swimming, gymnastics, salsa and folklore, Desormeaux knows a thing about the art of dancing.

This year, along with four other female dancers and her favourite choreographer and founder of Ritmo Baile dance school, Roudi Benyoucef, she has become part of the historical event.

On Jan. 26 the Ritmo Baile team under the guidance of the artistic director Benyoucef kick started the very first four-day bachata festival in Ottawa that brought together best local and guest dancers and instructors.

After spending more than 25 years of learning and performing both nationally and internationally, organizing the latin dance societies at Carleton University and the University of Ottawa, Benyoucef decided it was time to share all his knowledge and give back to the community. And the festival was the right way to go.

“I believe that we have the responsibility to start something that would allow quantity to come and share the same style in a short period,” says Benyoucef.

The festival included over 13 workshops, special guest performances, shows and four nights of socials – special events where students are able to showcase what they’ve learned and enjoy their dance in a non-competitive atmosphere.

The team of five Ritmo Baile members had been working on the organization for more than four months – putting the promos, managing the website, finding locations and sponsors and even learning choreography to perform at the festival.

Julia Hayko, a Carlton communications grad, is one of the five devoted members who had been juggling these tasks to bring the festival to life. She was one of the dancers who along with Desormeaux performed at the highlight of the festival – Rising Stars celebration – annual event that praises graduates of the school.

After 18 years of doing ballet, Hayko wanted to try something very different. And sensual and smooth bachata was exactly what she was looking for.

Born in the Dominican Republic, bachata is a fairly new dance that is influenced by many different latin styles such as rumba, salsa, bolero, zouk. According to Benyoucef, it has absorbed almost every latin and Western dance influence.

“Sensual, meaningful and explosive” bachata delivers value through every step and move.

“There’s a thin line between being respectful with the person and because the dance is very sensual the idea might come across the wrong way,” says Benyoucef.

“As teachers we have to be careful with how we are delivering the message. We are not teaching you to be vulgar.”

And with decades of training and learning in such countries as Spain, Algeria, France, Cuba, Egypt and Canada, Benyoucef knows exactly how to deliver the message. The proof is the 50 students that keep returning to his classes over and over again.

“You can be the best teacher, but it all comes down to who you are as a person,” says Hayko. “And his expertise and personality is like nobody else’s.”

“I have 50 people in class and they all have their own lives. But they all come to me and know that for one hour I can make them forget about that,” says Benyoucef.