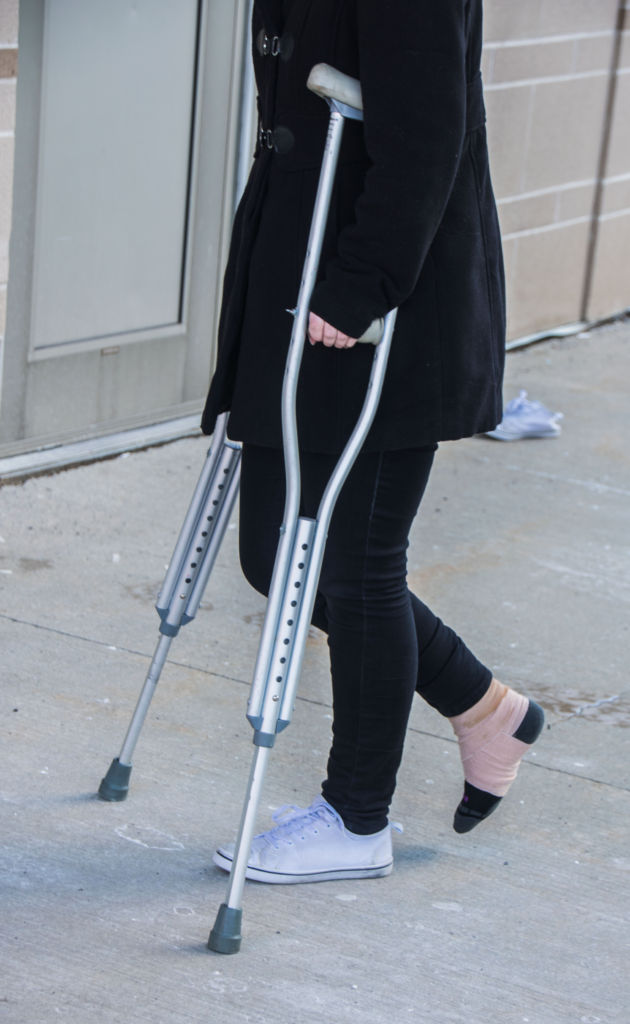 Four years ago, I stepped on the football field for the last time. I was playing for the Ottawa Colts, in a game against the Nepean Redskins that we were going to lose. The play had just ended, I was blocking in the middle of the field, and suddenly, I felt a gigantic force hitting the left side of my left knee.

I tried to run away from the pain, but my knee didn’t move – only my body. I let out a scream. To this day, I don’t think it was the pain that caused me to cry out. It was the realization that football as I knew it was over. Coming back from a knee injury is tough and it can take a long time to recover, something I didn’t have in me at the time.

When it comes to traumatic injuries, I’m not a stranger. In 2010, what was supposed to be a minimally invasive surgery on my right shoulder, turned out to be much worse. Most of the ligaments and muscles in my shoulder were torn. The recovery time was roughly seven months, but I was back on the field in a third of the time.

The hardest part of suffering a serious injury is not the pain, or the time put in to regain your composure. It’s not the journey through recovery. It’s having the courage to step back out on your respective turf, and trying to be the same player you were before the injury occurred.

Those like Algonquin’s previous basketball captain Owen Powers, 23, who recently left the team half-way through the season for personal reasons, has so much experience with injuries that he has taught himself how to brace for a comeback.

For him, it all started in his Grade 11 year at Earl of March High School. Up by several points, with the win in sight, Powers decided to go for a lay up with just under a minute left to go. In an instant, he was fouled from behind, and landed against the wall and the floor.

“At the time, I thought I had just hit my ankle against it,” says Powers. “I got up and just tried to shake it off, I walked to the free throw line and picked my foot up, and it was kind of just dangling there and I thought ‘oh man, what’s going on.’”

Because he was wearing high-top shoes, he didn’t really know what to think because he couldn’t visibly see any injury. The moment he saw his foot dangling, his face went white and he ended up in the hospital.

“It turns out the bone went right through the skin, I guess when it landed against the floor and wall it just snapped,” says Powers. “And even to this day, I have plates on both sides of my ankles – I had to get reconstructive ankle surgery. That was at the end of Grade 11, and I ended up having to miss part of my Grade 12 season too.

Just a year and a half later, he tore is Anterior Crucial Ligament (ACL) in his knee while playing in Indiana for the Amateur Athletic Union with his team based out of Toronto. And then a year later, he tore is ACL on his other knee. To play through the season, he bought a knee brace worth $1,500, and near the end of that season he ended up tearing every ligament in his knee inside of the brace.

“I wouldn’t let it,” he said. “One thing that definitely did happen is I’m much slower now then I used to be. It’s not because I was timid or anything, it’s just that when you tear both your ACLs and break your ankle, you’re not going to be as quick or as explosive as you were.”

But when it came to mentally prepare for it, he told himself he would only come back if he knew he was ready.

“I told myself, and my therapist, that I’m not going to come back and play until I’m ready,” he explains. “If you see me in games, I don’t wear tensor bandages, or braces or anything like that. A lot of athletes come back and wear knee braces, and then their body becomes reliant on it.”

He says it enters your pre-game though processes, and eventually that’s all that you think about.

Dr. Cathy Kerzner, an Ottawa-based clinical psychologist whose practice includes sports psychology, says that the role the sport plays in the athlete’s life can have the biggest impact on them.

For other athletes, the injury itself can be so bad that they are never able to make a full recovery. Nigel Nathaniel, 30, who graduated from Carleton University with a degree in chemical engineering, is one of those athletes that just couldn’t make a comeback.

He was playing in a game for the Ottawa Invaders, and he was blocking a person and pushing them towards the outside. The play was a sweep to the right. He could sense the play was moving towards him, and suddenly, the running back with the ball, as well as three or four defenders, hit him from behind and all he heard was a loud snap.

It turned out that he not only had torn ligaments in his knee, but he had broken both his fibula and tibia on his left leg. After being put in a cast for a week while awaiting surgery, he got reconstructive leg surgery.

About a year later, he ruptured his ACL in the same knee he had damaged prior, and because of a misdiagnosed meniscus sprain, he had no idea that anything had ruptured.

This time it wasn’t in a game, it was just throwing around the football with a couple of people from the team he coached. In his following Invaders season, he was going to come back at the midway point, but his coach told him to heal first because their starting four receivers were already chosen.

“I was disappointed because I had worked hard to get back to that point, and football was my love and my passion,” said Nathaniel. “But, in the following year when I tried to come back during training camp, is when I discovered I had the ruptured ACL, that’s when everything stopped, and I just stopped playing.”

Coming back from a sport may be difficult, but with a little mental preparedness, it can be achievable. Owen Power’s could push through, by telling himself he wouldn’t come back until he was 100 per cent healed. Nathaniel became injury prone, and his left leg never fully recovered. Sometimes, it’s not just the psyche that’s affected, it’s the human body that can’t handle the injury.