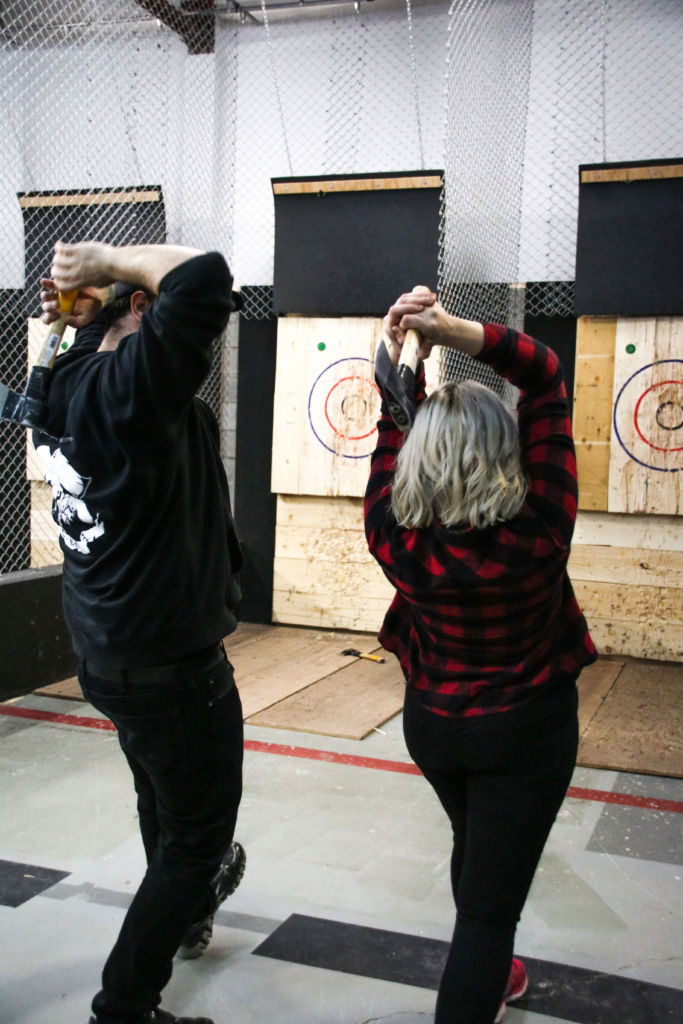 Searing pain shot right through my body the second the birdie soared over the net and collided with my eye, instantly ending my lucrative, elementary school badminton career.

Growing up, I had never been the athletic type and preferred living life on the sidelines due to a fear of balls being thrown near my face by rambunctious children. So when I discovered the seemingly gentle game of badminton in grade five, I thought I had finally found my sport. At least for a few weeks, anyway. Let’s just say that being nearly blinded by a badminton birdie was enough to keep me on the sidelines for good.

Now 23 years old and faced with the challenge of writing a sports story, I decided it was finally time to conquer my fear and get back out there. After a brief stint playing intramural volleyball, I had built up enough confidence to take things a step further and try the super trendy, yet terrifying sport of axe throwing.

For those who are unfamiliar, axe throwing is kind of like throwing darts, but with axes.

It has also developed a strong reputation as a competitive league sport where players actually compete against other teams.

Algonquin College’s Pembroke campus has even jumped on the bandwagon with its logger-sports team where students compete in events like quarter splitting, underhand chopping, water boiling, pole climbing, pulp throwwood chopping and you guessed it, axe throwing.

The team is mostly comprised of the college’s forestry technician students like Ariel Ilic who joined the team in September 2015 out of curiosity and a desire to try something new.

“What initially drew me to the sport was that I didn’t know much about it and didn’t know when I would be able to do something like this again, so I thought I’d better seize the opportunity while I could,” said Ilic.

“What I really enjoy about axe throwing that it is really fun and it just seems so out there to take this sharp, powerful object and just throw it at a target and it was amazing seeing how slight changes in your focus, grip or stance improve your accuracy.”

Keeping that in mind, I headed over to Batl Ground in Ottawa where I was coached by general manager, Matt Wito.

I walked in with the expectation that I was going to be throwing and failing miserably alongside a group of ‘professionals’, but I was pleasantly surprised to learn that it wasn’t the case at all.

“Kind of everybody starts out being a newb, because axe throwing in general doesn’t have a lot of people coming in being like ‘I’ve been doing this for 20 years,’ because it’s kind of a unique kind of sport,” said Wito. “So a lot of people that do come in don’t’ know what to expect.”

Batl itself has only been in Ottawa for around a year and a half, but Wito has been involved in the sport for around three years and began working with the company after his London, ON based throwing club caught their eye.

“Me a couple of buddies started our own axe throwing club back in London and it was done on the cheap, there were six targets, like low budget type of thing. We did it just for something extra to do and after eight months, Batl from Toronto, we got on their radar and they came down, offered a bunch of helpful hints, say a few things and then we developed a partnership.”

I may not be on that level just yet, but after just one session, I went from the girl who cowered from badminton birdies to one who threw an axe and managed to hit the target more than once. And while I may never be confident enough to break into the axe throwing scene, I can definitely say I will be back to Batl again soon for round two.

And for those who are considering giving axe throwing a go, Ilic offered up some sound advice.

“I would say if you ever have the opportunity to try it, definitely go for it,” she said.

“I was a bit apprehensive at first because it just sounds like a really easy way to get hurt by flinging axes around, but as long as you aren’t walking in front of the target when people are throwing, it’s very safe and great to do with a bunch of friends.”