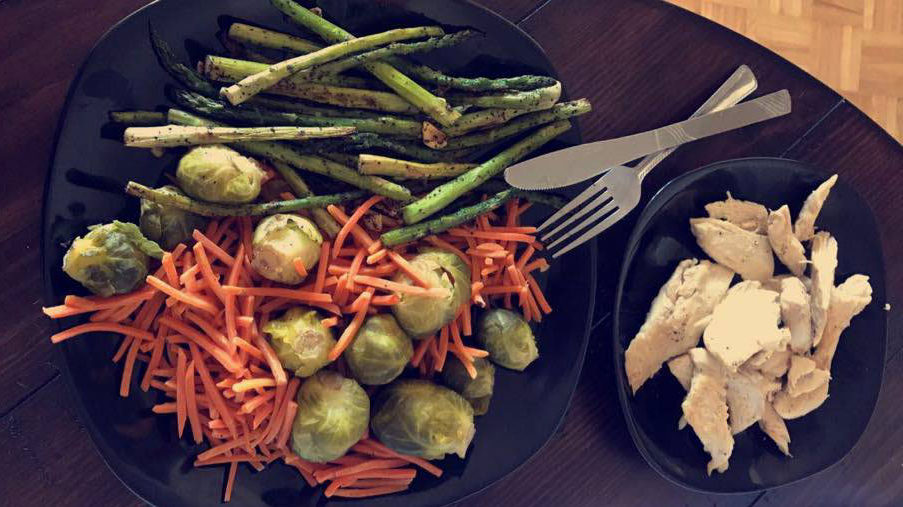 Most sports require its players to be physically active. But depending on their nature, different sports have different restrictions when it comes to an athlete’s diet. To make matters more complicated, many other factors, such as training intensity and duration, age, gender and food preferences weigh into a coach’s planning.

A diet is something sports fans often haven’t heard of when they watch their favourite team or players. Glue had a chance to meet coaches and athletes from various sports to talk about this important topic.

Fillipe Herculano, 26, is working as a part-time coach at the Ottawa Gymnastics Centre. Despite coming to gymnastics quite late, he says he’s training as much as possible so he can be eligible to compete someday.

“My diet is very simple,” says Herculano. “I simply eat what my body needs, the general rule is that everything has to come primarily from whole foods and has to be from a decent variety of ingredients.”

Herculano says he avoids processed food as much as possible and keeps his daily nutrient intake consistent. According to him, gymnastics require more endurance than strength.

“If you think about the competitions, they last no longer than five minutes on each event,” said Herculano. “In other sports, soccer for example, they usually ‘carb up’ because they’re going full power, non-stop, for 90 minutes or more.”

“Muscle building is definitely important but I would say the biggest goal is muscle recovery and prevention of injuries,” explains Herculano. “Adequate nutrition has to exist so you can recover and be consistent at all time.”

Herculano’s opinion is shared by Yazmeen Jamieson, a first-year human right students at Carleton University, who plays for her college’s soccer team.

“The night before games we ‘carb load,’” says Jamieson. “Lots of pasta and healthy carbs is involved so that there is an energy boost for the next day. After games, I drink chocolate milk to replenish my muscles so that my legs don’t cramp up.”

Jamieson was a member of the U17 Jamaican Women’s National Soccer team, which gave her plenty of experience on how to maintain high performance.

“During the week, I drink a lot of muscle-building products because we have training almost every day and your muscles tire quickly if you aren’t hydrated,” says Jamieson.

What adds up to Jamieson’s daily task of staying in good shape is the fact she recently became a vegan.

“It is super hard to do as an athlete because I need to have the right protein,” says Jamieson. “It is also extremely expensive. For example, a package of vegan soy based fish ticks are $6 for five fish sticks when you can get 30 or 40 regular fish sticks for just $10. Soy milk and almond milk are also much more expensive than regular milk.”

Jamieson says that her goalkeeping coach was also a vegan, so there was no pressure put on her, although they wanted to make sure she’s receiving enough nutrients.

Both Jamieson and Herculano agree that being a student-athlete means they have to be more considerate when it comes to food choice so that it fits their budget.

“I find that the farmer’s markets here are the best source but it’s very expensive and limited on certain seasons so sometimes I do have to think twice before spending on food,” said Herculano.