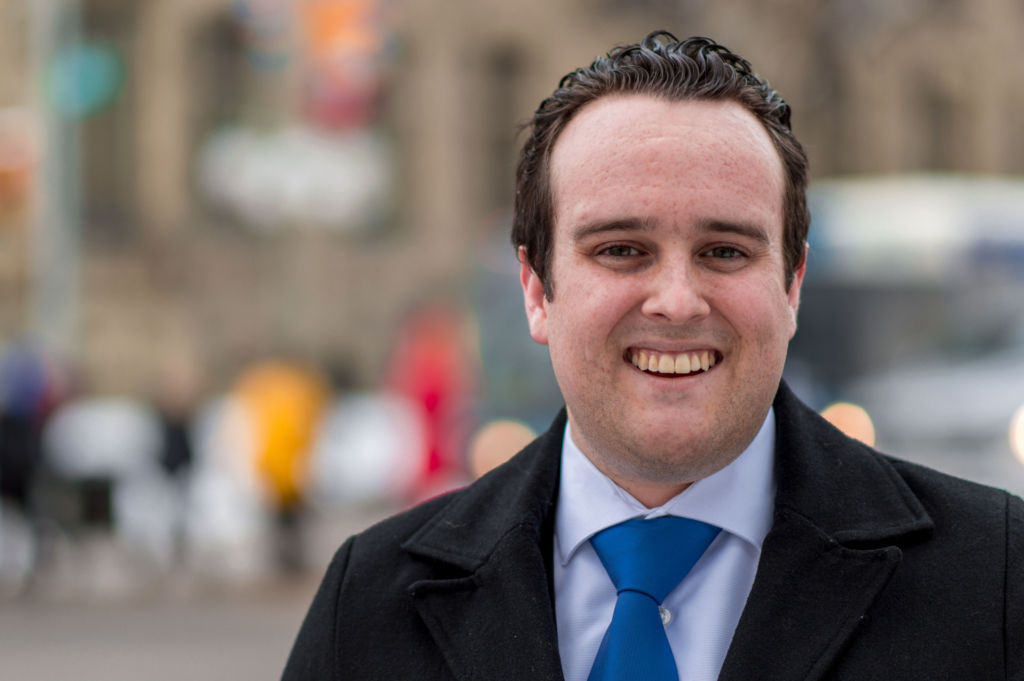 Politics is generally thought of something reserved for grey-haired old farts, but more and more, we’re seeing younger people not only taking an interest, but an active role in politics. People as young as 14 years old are joining political parties and getting invested in the political system for years to come. One of those people who got hooked early on is Ottawa native Jeremy Roberts.

Roberts took an early interest in the Progressive Conservative Party and now at age 25, he is aiming to become the next MPP for Ottawa West-Nepean. The next provincial election isn’t until 2018, so Roberts is campaigning to be the Conservative candidate for his riding. In his campaign, he must compete against not only the other parties, but his fellow Conservatives as well.

Roberts’ primary competitor for the Conservative candidacy is Karma Macgregor, a party member of a more mature age who voters might see as a more typical kind of candidate.

“Nomination campaigns are always interesting because it’s a competition among friends,” says Roberts.

Despite the friendly competition, Roberts is confident that he will make an impact during his campaigning regardless of his rivals or his age.

Robert’s younger brother has autism and has needed medical support for a number of years. Because of this, Roberts has taken an interest in supporting more families dealing with similar issues. This is also part of the reason Roberts decided to join the Conservative Party when he was younger.

In 2007, Roberts attended a John Tory rally and met Tory, who wanted to support families dealing with autism. A year later, Roberts met Tory again at another engagement and Tory remembered his face and his family’s story. After that, Roberts knew this was the party for him.

“I found a party that represented my values, fiscal responsibility and social compassion. I found people in that party who were willing to stand up for families like mine and recognized the difference that could be made as part of that,” says Roberts.

Since then, Roberts has been mentored by members of the party and felt welcomed by them and encouraged to do more with his life. Roberts decided to take the electoral plunge now because he just finished his Masters in Public Policy last year and he had an issue he’s passionate about. He says that he feels the Liberal Party in Ontario has not provided satisfactory support to families dealing with autism and that this can be his chance to bring about a positive change.

“I’ve seen a number of Conservative leaders like John Tory, Jim Flaherty and MP Mike Lake who have championed issues they have been personally affected by without doing so in a fiscally irresponsible way,” says Roberts.

Roberts does acknowledge that some people might use his age against him but he remembers what one of his mentors, the late Max Keeping, said about the engagement of youth.

“One of Max’s biggest messages to young people was if you care about something don’t just talk about it. Go out and do something about it,” says Roberts.

Knowing Keeping’s words, Roberts decided to campaign and try for a position in office very rarely obtained by someone his age. Despite this, Roberts has exceeded his funding goals for his nomination campaign and he’s confident in his campaign going forward.

“Nominations are about who you know on the ground and who you are meeting,” says Roberts.

Knowing it will be a challenge to take part his riding from the Liberal Party, Roberts makes his rounds going door-to-door every night he can with his volunteers.

“Door knocking is a great way to humanize politics and get past all the bad press politics gets,” says Roberts.

Roberts says that it isn’t enough to just send out flyers but to get people to listen to him, he needs to personal touch.

To keep young people engaged he also reaches out to political clubs at the University of Ottawa and Carleton University as well as even attending some of their events to meet the students.

“uOttawa put on a ‘Pool and Politics’ event the other week and we recruited three people from that night,” says Roberts.

Politics may leave young people feel alienated and have them question the value of casting a vote in any election. By showing people that they can make a difference by participating in the political process it dispels the idea that one vote doesn’t count.

“If we can encourage more people to run, we can change the idea of politics being an old man’s club,” says Roberts.

Roberts says that most people who learn about politics at a young age are more likely to maintain that interest throughout their lives. He says that the education around politics should change to be more engaging. Currently most secondary school civics classes are taught in a non-partisan way but Roberts thinks it should be otherwise.

“Civics classes should be taught in a multi-partisan way so that each student can find what party they best align with,” says Roberts.

Roberts knows winning the nomination as well as the riding will be a challenge but by trying he is proving a point and doing what Max Keeping told him. He’s not being a bystander while the world goes by, he’s standing by his convictions and trying to make a difference regardless of his victories in the 2018 provincial election.

“Young people getting involved isn’t just good for my party but for democracy as a whole,” says Roberts.