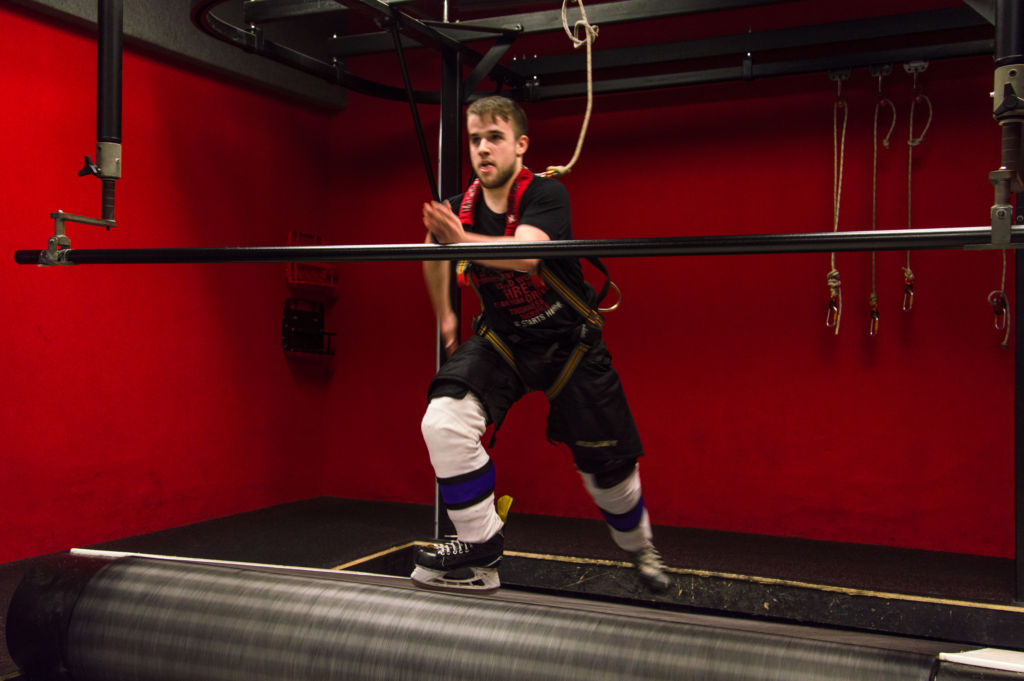 Outdoor rinks may not be open, but that doesn’t mean your skating must come to an end.

Just because the Rideau Canal is (temporarily) closed, doesn’t mean that skating needs cannot be fulfilled.

While there hasn’t been a lot of time to practice up on skating skills, there are some places across the city where you can do just that.

Next Generation HKY has a location at 191 Knoxdale Rd. which is just a short trip from Algonquin’s campus.

Nest Generation HKY doesn’t have a skating rink, but it offers something different for skaters to practice their skills, a Blade skating treadmill.

While the treadmill is primarily used by hockey players says Evan Brownrigg, the COO and director of player development at Next Generation HKY. Brownrigg says that it can push the athlete more than they can on ice through the use of controlled speed and incline as well as being able to reference the mirror and different cameras to show the athlete what adjustments they may need to make.

“The Blade skating treadmill is an eight by six foot surface. It really does a good job of replicating the on ice experience through increasing speed, using incline on the treadmill. We’re able to create an experience for our players to push them to the next level,” says Brownrigg.

Coleman Emery, 19, has been playing hockey for about half of his life.

“It’s been a while (since I’ve used the treadmill), I need to get on it more often,” says Emery.

According to Brownrigg, the treads need to be replaced every three years on the treadmill due to wear and tear from the skates.

Next Generation HKY hopes to focus on working removing that fear of getting hurt or falling for beginners, which then allows them to work on specific skating skills and improvements.
“Our primary clientele would be minor hockey players, both male and female up to the age of 18-ish. We’ve also had adults and older players on the treadmill as well. For an advanced skater what we usually do is work on building a foundation or stance to work off of,” says Brownrigg.

If someone is looking for a more traditional skate, there are other options open.

“The problem that we’re having with the last few years with the canal and things in Ottawa is that the winters haven’t been very cold, so the outdoor rinks are of no use right now and of course the canal is closed. What you could do then is go to all of the public skating and there’s public skating at all the arenas all the time, especially on the weekends. As far as I know almost every arena actually has to have public skating at it. Dates and times differ from whatever area you’re in, but I think you can just go on city of Ottawa’s website and figure the dates and times for public skating,” says Ollson.

“I’d say the first thing that’s really important is balance. So obviously you’re on blades. If your balance point is problematic we’ve got to do things with your posture and your stick and the way you carry your body to fix those types of things,” says Ollson.

While his Power Skating class is intended for people between the ages of six and 17, he also teaches an Intense Training course meant for competitive players.

“We only take a small group of players in those intense sessions, maybe eight to 12 maximum so that I can focus on the individual more than the group setting. Tonight we’re going to have maybe 24 kids on the ice, so it’s a lot harder to give them as much attention as you’d like to be able to give them, so you just do the best that you can,” says Ollson.

Like with many skills, the key to mastering something is practice, whether it be golf, skating, or guitar.

“Eddie Van Halen didn’t just pick up the guitar and know how to play. I’m guessing that he spent hours and hours plucking away at it, learning how to produce those sounds before he mastered it,” says Ollson.