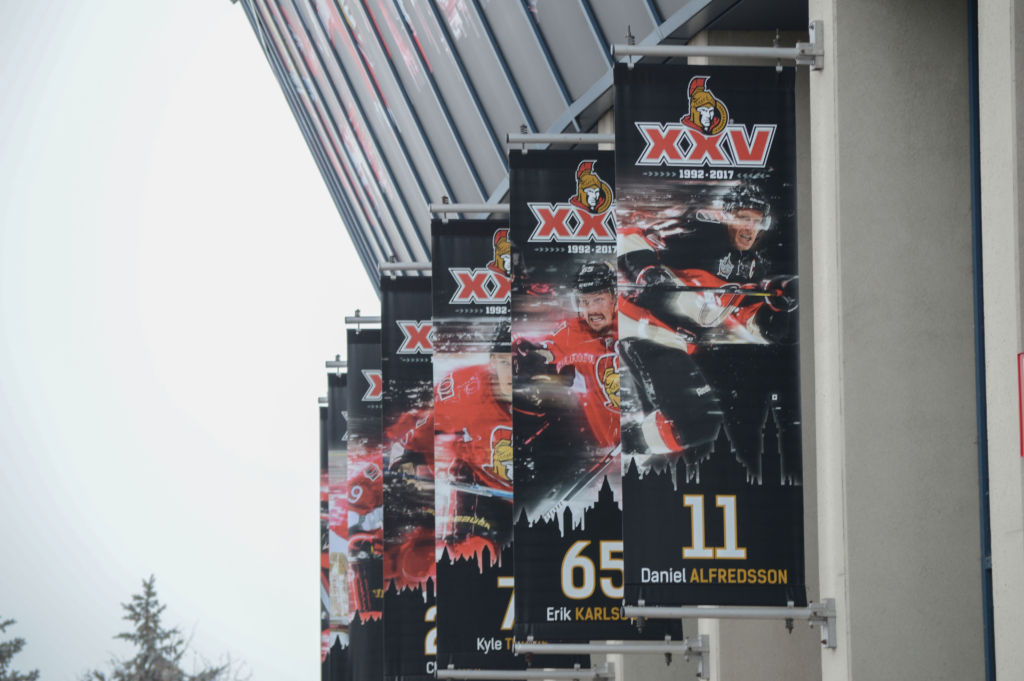 Former Ottawa Senators captain Daniel Alfredsson cemented his legacy as an NHL player on Dec. 29 when his #11 jersey was retired at the Canadian Tire Centre. That night, he was also recognized for his efforts as an advocate for mental health awareness as the Daniel Alfredsson Scholarship in Mental Health was announced.

The Ottawa Senators Foundation, Bell Let’s Talk and Carleton University have donated a combined $111,000 to the scholarship fund, in reference to Alfredsson’s retired jersey number. Scholarships will be awarded annually to students in Carleton University’s neuroscience and mental health program.

“Mental health is still very much stigmatized,” says Kim Hellemans, the undergraduate chair of the Department of Neuroscience at Carleton University. “When public figures contribute to mental health education, this not only serves to spread awareness, but also provides individuals who might be struggling with their mental health the motivation to reach out and seek treatment and support.”

In 2016, Alfredsson received an honorary degree from Carleton in response to both his NHL career and his commitment to raising awareness for mental health. The scholarship is another milestone reflecting Alfredsson’s advocacy. In 2008, he acted as the face of “You Know Who I Am,” a campaign created by the Royal Ottawa Foundation for Mental Health aimed at eliminating the stigma of mental illness. Alfredsson has also worked with the Do It For Daron campaign and has expressed support for Bell Let’s Talk.

“This is something very personal to me and a cause that I have been passionate about for a long time,” Daniel Alfredsson said in a Dec. 29 press release via the Ottawa Senators Foundation. “To know that Carleton University has matched the funds provided by Bell Let’s Talk and the Ottawa Senators Foundation to establish a scholarship in my name that will assist the next generation of leaders in this field is a great honour to me.”

Athletes may be tough, but mental illnesses can be tough, too; Researchers from Kean University and Drexel University surveyed 465 college athletes over three consecutive years and found that 23.7 per cent — almost 1 in 4 — displayed “clinically relevant level of depressive symptoms.”

Alfredsson’s advocacy for mental health awareness began in response to his sister’s Generalized Anxiety Disorder, but the message is important for athletes as well.

“Athletes make great ambassadors because people look up to them,” says Samantha DeLenardo, co-founder of the Student-Athlete Mental Health Initiative (SAMHI). “This role model status or expectation of toughness is what makes it so difficult for athletes to seek help for mental health problems.”

DeLenardo played hockey for five years at the University of Ottawa, where she completed a Master’s in health communication.

“When professional athletes with status like Alfie add their voice to the conversation, the public pays attention,” says DeLenardo.

DeLenardo created SAMHI with University of Ottawa student Krista Van Slinglerland after a series of events: her brother’s mental illness and the suicides of three NHL players among them.

SAMHI’s goal, according to their site mandate, is to “eliminate mental illness stigma in post-secondary sport and facilitate access to the resources needed to maintain and improve mental health.”

“The stories we share, the partnership we are developing, and the resources and programs we are implementing are all critical to changing what it means to be mentally tough,” says DeLenardo. “Sport is a wonderful thing, but it should not define us, and it should certainly not make us ill, or keep us from getting better.”