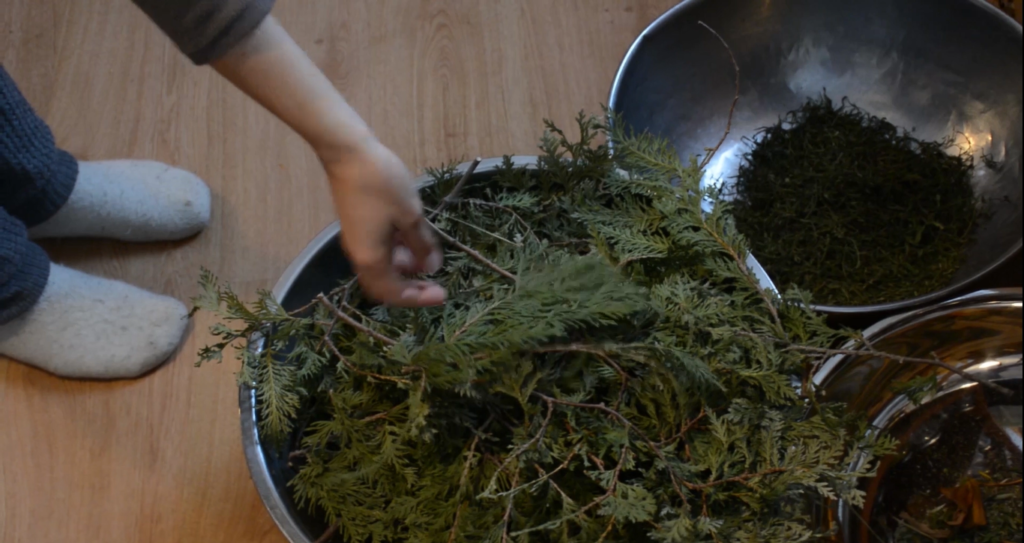 What if I told you you could be eating nutrient-rich foods that have greater health benefits than what you can grow yourself? These foods can also often be found closer to your doorstep than the nearest Loblaws. Oh, and they’re free. For these reasons, foraging for food seems like a no-brainer. Especially on a student budget and waistline. All it takes is some know-how.

Amber Westfall, owner of The Wild Garden stationed out of Just Food Farms in Blackburn Hamlet, has become an expert in the foraging and cultivating of wild plants.

“If I were a student, I’d be out getting dandelion greens, lambs quarters, drying them out and sprinkling that on my ramen,” says Westfall. It sounds like a joke, and I laugh, but seriously, why not? Collecting wild greens for free seems like a good way to save some money on meal options that aren’t fried. Westfall leads me out to the “kitchen garden” in the front yard of the farmhouse at Just Foods. Despite it being a frosty winter day, she points to a dandelion in bloom and brushes the ice off of some lambs quarters. “They’re just so hearty,” she says.

Westfall is a herbalist and steward at Just Food Farms, one of over 60 community gardens in the Ottawa area. The farm is a certified organic and collaborative garden space built on NCC land that is home to a dozen rented half-acre plots where people are free to grow what they wish. For Westfall, it’s all about educating. Since she quit her day job four years ago to work on her business full-time, Westfall has been growing her business and teaching others about plants, soil and permaculture.

During the growing and foraging season she teaches workshops and hosts wild walks around the Just Food property that are geared towards showing attendees how and what to search for when foraging wild foods. “That’s what I want to do, I want to reconnect people and plants,” says Westfall. Although she encourages beginners to learn about foraging wild plants and edibles, she also warns of the ethics behind foraging that is often overlooked by newcomers.

Westfall leads these workshops mostly throughout the spring and summer, although the season may last longer than you’d think. According to Shelley Lambert, chief forester at Nanabush Food Forests, some types of mushrooms such as the Blewit mushroom and certain nuts can still be found into December.

In an email exchange with Glue, Lambert indicates that she is working to incorporate a method of foraging that mixes both wild and planted methods. “I do lots of food foraging but I am also actively creating ‘nearly wild’ food forests mimicking natural forests to cultivate selected perennial herbs and vegetables, fruits, nuts and mushrooms,” says Lambert. Having a cultivated natural environment for some vegetation could be the answer to some of Westfall’s concerns regarding over-harvesting. “There are some rules of thumb that I’ve heard, like, ‘don’t take more than 10 per cent,’ or ‘take one in every three plants,’ but that’s a little bit oversimplified,” says Westfall.

However, there are certain species of local wild plants where ethics are more important than in others. In some cases, like foraging chagga– a mushroom species that grows off of birch trees– Westfall indicates that a more nuanced approach to ethical foraging is applicable. But for others, you can pick as much as you want. “Stick with the non-native, weedy, species, especially the invasive ones,” says Westfall. “Eat the garlic mustard, eat the lambs quarters, the amaranth, the dandelions.”

While there are many plants, native and non-native, that are entirely edible and versatile in their health benefits and accessibility, it’s important to recognize that there are others that aren’t as beneficial and potentially dangerous.

As Westfall notes, “Accurate identification is essential. Being 100 per cent positive of your ID is so important because there are plants out there that are potentially harmful.” With some dangerous vegetation in the area, having an expert by your side as you learn the ropes may be a good idea. Luckily, experts are becoming easier to find.

Westfall notes that harvesting wild foods is becoming more common. Perhaps out of pure interest, but also perhaps out of necessity. While no correlations have been found for recent years, it’s interesting how history repeats this trend during times of economic hardship. “During The Depression, during both the First and Second World Wars, even in the collapse of 2008 people, in the States especially, were supplementing their diets with wild food out of necessity,” says Westfall.

In 2015, 39 per cent of post-secondary students surveyed across Canada by the Hungry For Knowledge study, reported experiencing food insecurity. In addition, there was a reported 2.1 per cent increase in homeless youth using shelters in Ottawa in 2015 than in the previous year, according to city data reports. With the increasing amount of homeless youth in Ottawa, and a student population who are in severe debt and struggling to afford rising food costs, learning about what foods are edible and forgeable in the local area could mean the difference between a full dinner plate and an empty stomach.