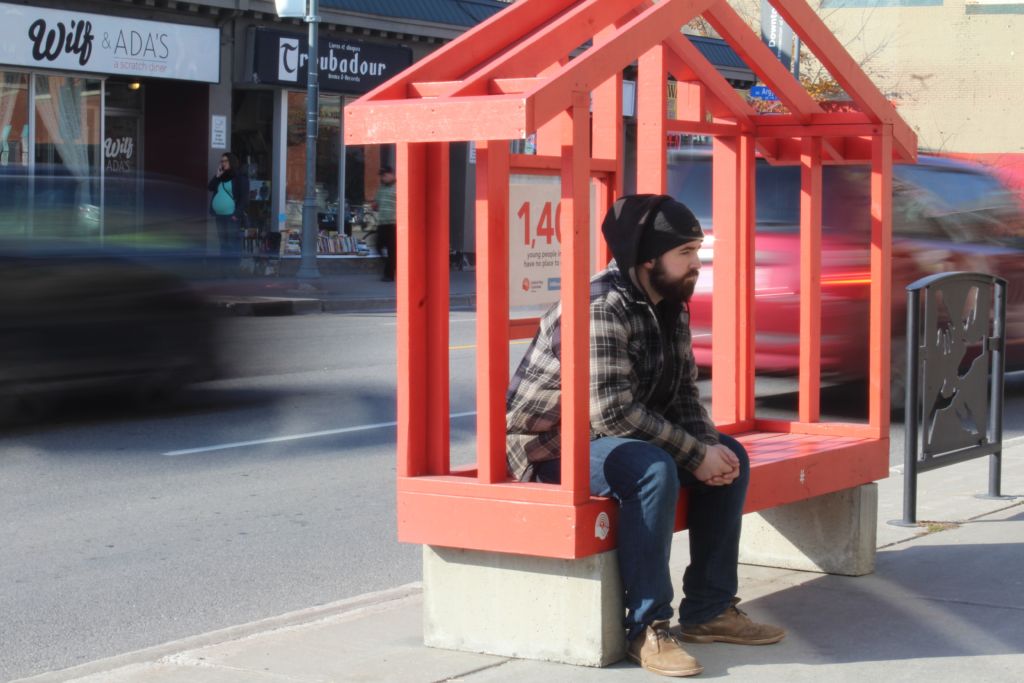 Glue explores what initiatives in Ottawa are doing to help eliminate youth homelessness.

You may have noticed red benches lining Ottawa’s Bank Street for the past few months. At first glance, they may seem like a nice place to sit, but if you take a closer look you’ll see they are there for a much more important reason – to raise awareness about the city’s homeless youth, and invite Ottawa to do something about it.

More importantly, as the weather gets colder and the snow starts to stick around on the ground, these benches should serve as a reminder of the Ottawa youth who are currently at-risk of being, or are currently homeless.

With the help of the Ottawa Arts Council and the support from the Bank Street BIA, the benches aim to elevate the conversation about youth homelessness in Ottawa

The Alliance to End Homelessness Ottawa recently released its annual Progress Report revealing that 932 youth aged 16-25 stayed an average of 39 nights in emergency shelters in 2014.

The report also identifies that 665 of the primary applicants on Ottawa’s waiting list for affordable housing are aged 16-24.

This past April, more than 100 volunteers took to the streets of Ottawa as part of the 20,000 Homes Campaign. They interviewed the homeless to hear their stories and to learn about their housing needs. The volunteers met with 128 youth and learned that:

The City of Ottawa is not the only one working to remedy the city’s homelessness problem: Ottawa students are working together to make it a priority as well.

Algonquin College students recently, in late September, spent 24 hours in Minto Park, in order to simulate what it would be like to be homeless for a day.

During their simulation, the students panhandled on Elgin Street to raise money for Operation Come Home.

Operation Come Home is an Ottawa-based employment, education and support centre for homeless and at-risk youth aged 16 and up.

Student participant Veronica Tyrer said that although she did feel some of the abuse that homeless people feel, like name calling or being ignored, she was surprised by how kind and generous most people were towards her and her classmates.

“Even people who don’t have change show us they care by talking to us,” she said

Organizer, Cat Baron, has been a part of the event for 10 years. She says when the organizers prepare for the event, one of the most important things is to not reveal too much about the experience to the students.

“I want them to have their own experience, I don’t want to taint it by telling them about what has happened in years before,” she says.

Although 24 hours does not compare to an actual life on the streets, the students were able to feel some of the abuse that the homeless people feel.

The event serves as a good stepping stone for the community and justice services students, who will be going into their field placements in November, as it gives them some insight into the issues that their future clients face like poverty and homelessness.

Ultimately, Baron said that the idea is to make the students more compassionate, more aware and more informed as workers in community and justice service agencies. She says that every year provides new eye-opening experiences for her and her students.

“No one has ever regretted doing it,” she says, “but there are students that have regret not doing it.”

Algonquin is not the only school mobilizing students about the issue, Carleton University runs a campaign to raise awareness for youth homelessness as well.

Carleton’s Five Days for the Homeless Campaign typically runs in the spring, around March.

Participants must remain on campus for five days, must have no income, bring no food or drinks with them, have only a pillow and a sleeping bag, no access to showers and must attend all classes. They are also suggested to avoid personal communication devices and they must write about or film their experiences for the duration of the five days.

Kendal Holtfoster, a fourth-year Bachelor of Commerce student, was the charity director for the event last spring.

“I got involved because I was really inspired by the way one group of students could take a week out of their lives and raise so much money and make such a difference,” says Holtfoster. “There is definitely a stigma associated with youth homelessness and I think this campaign really gets people to focus on the youth and how this isn’t a decision they made, it’s the only choice they had.”

“I used to think anyone should be able to get their life together if they wanted to. I definitely don’t feel that way anymore,” says Holtfoster.