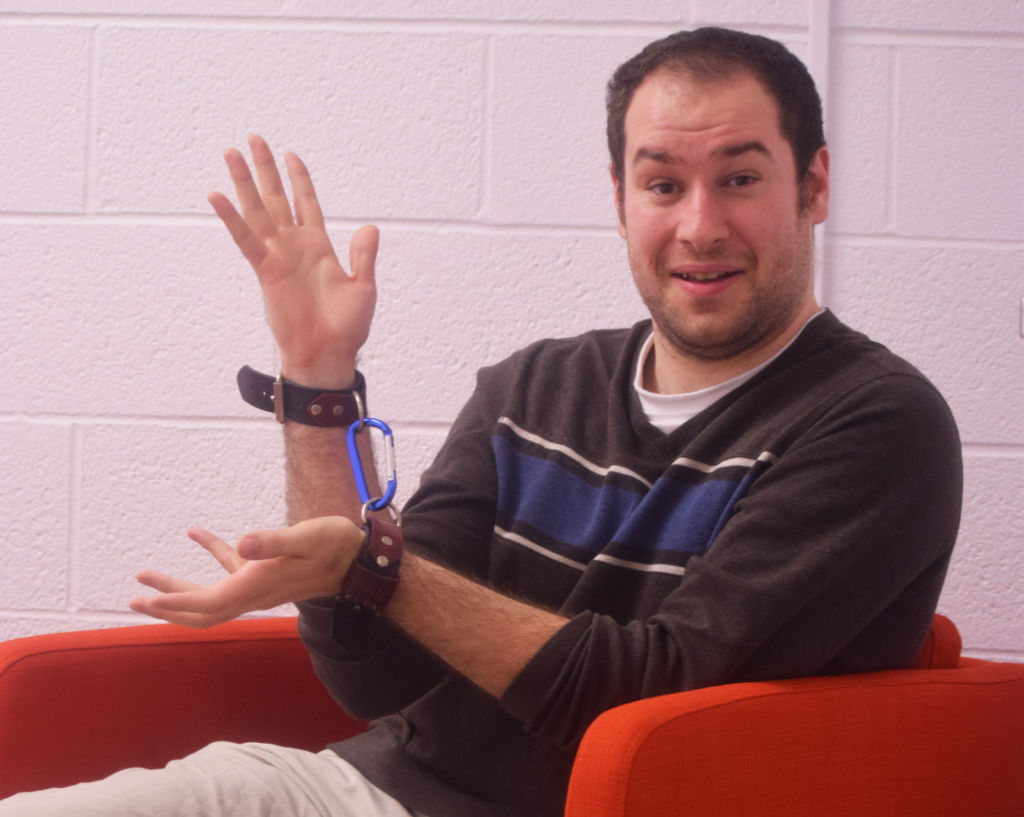 Kink club at college teaches students how to be the good kind of bad.

Olivier Martin was nervous as hell when he attended his first BDSM get-together. He didn’t know what to expect, but he told himself he was only there because he was very bored. At the time, he was dealing with major self-esteem issues and was coming out of years of depression. Martin didn’t actually think kink was for him, but he went anyway to the restaurant where the group’s meeting was scheduled, making sure to sit down away from everyone, just observing silently for a while. That’s when an acquaintance saw him, surprised to see him and approached, asking what brought him there and what his interests were in the scene. Martin felt very shy to be put on the spot like that. The acquaintance smiled, and proceeded to break the ice for him. “I’m a Pain Slut,” the acquaintance said. And with those words the tension within Martin left.

If you have the idea that the average kinky event is like a party straight out of The Matrix trilogy you couldn’t be more wrong.

A group of half a dozen students sit in Algonquin’s Pride Centre, sprinkled around couches and a simple, no-frills table the evening of October 26. The only things that give away that this meeting might be about alternative sexual lifestyles, rather than, say, a knitting circle or a debate club, are the one pair of fuzzy handcuffs that sit on the table as a prop and a thick textbook on “the romance and sexual sorcery of sadomasochism”. The book covers a variety of subjects like potential partner checklists, how to tie ropes safely but securely, comics about the stereotypes of awful bedfellows and how to read what different types of bruises mean.

Kinky events are much more likely to look like an average group of friends getting together at a restaurant, says Martin, the organizer of the new college club Algonquin Students Kinky Education Workshop.

It isn’t exactly a restaurant – especially since for this meeting there are no actual snacks served, but the setting is as casual as friends gathered at a diner. One young man did bring his own hot-dog. Others are just finishing their classes. Even though some are strangers, the comfort levels are raised almost immediately.

“Communication is highly necessary in any relationship and especially when you’ve found someone you think you connect with,” Martin said.

He shares an example of miscommunication – how a partner of his stopped talking to him because he slapped her in the face in her kitchen, but not because he slapped her in the face. It was because he did it in her kitchen. She had not expressed to him that there were certain areas in her home where that was allowed and other areas where it was off-limits. These limits had not been expressed beforehand, Martin says, and it led to triggers, resentment and, ultimately, no longer talking to one another.

The community has a motto: “Safe, Sane & Consensual.”

“Safe as in making sure you’re properly prepared for what you’re about to do,” Martin said. “Sane, as in making sure it is actually possible to do. And consensual because it is absolutely vital to anything we do.”

He likes to throw in good communication on top of all that for good measure. It’s all in the words, according to Martin.

“The word ‘impact’ can vary between: I’m going to punch you in the face, to I’ll throw you out the window, right down to just tickling. So, always clarify.”

Clubs like ASKEW are important for students, Martin says, because a lot of people aren’t aware that there is a community that is willing to accept and support them until much later in life.

Ellis Toop, a student in the Social Services program at Algonquin says he finds clubs like this important to grow the community.

“It’s easier to have a community with more awareness,” Toop said.

Some other necessary elements of a safe, sane and consenting kink relationship that are taught in these workshops include: how to hit or kick without causing actual injury, how to fill out contracts and why they matter, accepting others’ kinks even when they are vastly different from your own, and possibly the most essential aspect besides communication – aftercare.

Martin explained how important it is that when you attend kink parties to not get in the way of anyone’s aftercare.

“Don’t interrupt the scene,” Martin said. “Even after the scene. Make sure the people have had time to recover. Believe it or not, it’s actually the subs that will punch you if you try to talk to them too soon after a scene, interrupting their aftercare. They can be really protective about that.”

Chris Farrall, a computer engineering student agreesspeaking from his own experiences. He says it’s true that you need to talk about triggers and limits in advance, but also be understanding that sometimes they only surface and become known when you try out a new act.

“It can be distressing to be knocked out of scene by something you didn’t even know would do that,” he said.

Kinks might be weird, but kinksters are not weirdos.

But it’s still not the kind of conversation you would be likely to share over tea with your mother-in-law.

ASKEW has about a dozen active members right now but there are roughly 70 members registered to the group officially. They have a Facebook group where events are shared called Algonquin College Kinksters.

“It was great to see how many people have been contacting us seeking to learn. Knowing that our workshops have been providing help to even one interested person makes it worth while,” Martin said.

For aspiring kinksters with a keen appetite for the scene, Martin has sage advice.

“Take it slow, trust your instincts, seek friends to help guide you – and always keep learning,” he says. “You don’t just pick up a knife and start cutting things. The education doesn’t ever stop.”