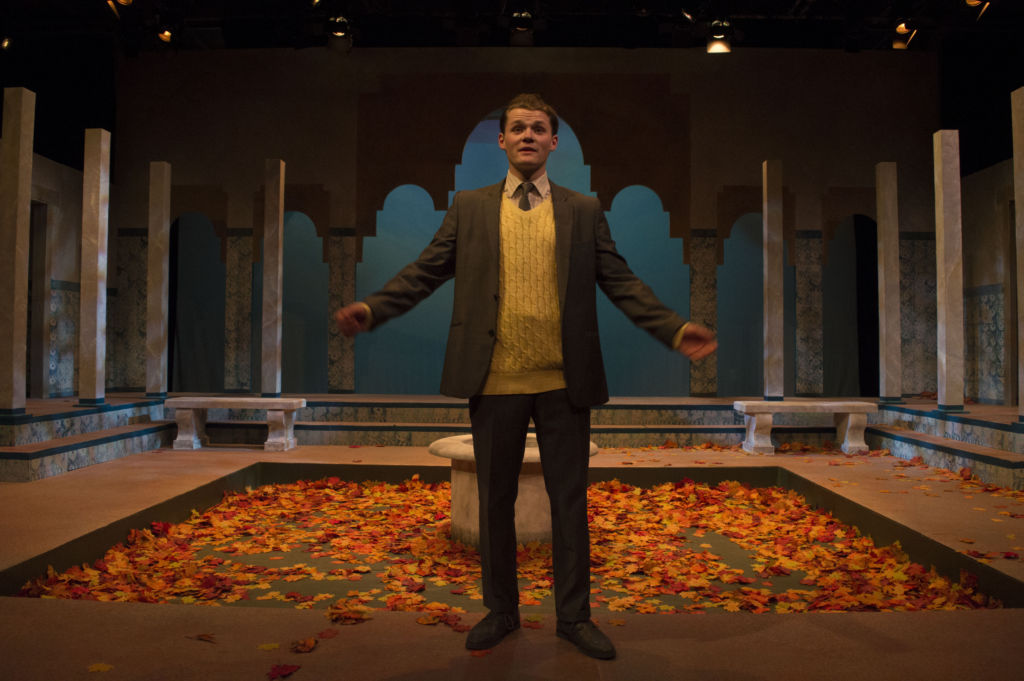 Jon Dickey keeps shifting his gaze back to the stage, only a few feet away. The entire set is engulfed in warm light. Orange leaves are scattered across the floor, contrasting sharply with the bright blue backdrop and white pillars. Everything else is dark in the small theatre in the University of Ottawa’s academic hall. Dickey is wearing a grey suit with a matching tie and yellow sweater – his costume for Berowne, a character in Shakespeare’s Love’s Labour’s Lost. Tonight is the final rehearsal, tomorrow will be opening night. But right now Dickey isn’t thinking about the play. He is thinking about his future. “I’m not shooting for friggin’ movie stardom,” he says, still looking at the stage. “If I could just get paid to act. That’s the dream right there.”

In a field where so few make it to the top, achieving such a goal could seem like a long shot. It certainly appeared that way to Dickey’s well-meaning relatives. His aunts and uncles accepted the words “science” and “biology,” but to them, theatre was the road to a broke, jobless future. But Dickey isn’t afraid of what they think. After all, he is already the black sheep in his family – or at least, he’s the only one to pursue arts. He knows he won’t be handed success, but he is prepared for the tough journey ahead and is determined to see this ambition through to the end. Dickey discovered theatre by accident. It started as a mandatory arts credit in high school, but it quickly became a passion. Now, he is in his fourth year of theatre arts at the University of Ottawa. He loves being able to tell stories by taking on the part of another character. One of his favourite roles was that of Judas in The Last Days of Judas Iscariot. He played the character in many different stages of life – from an eight-year-old to a final confrontation with Jesus in hell.

“Knowing and embodying who they are – or who you are trying to portray – they become their own creature, their own person on stage,” he says. “It’s a really cool process.”

When he graduates this spring, Dickey plans on spreading his wings in Ottawa’s theatre scene. And he is not alone. More and more students are choosing to follow their heart rather than their head when it comes to choosing what to study. But finding employment isn’t easy, especially in Ottawa’s limited arts industry. It often means stressful, sleepless nights, minimum wage jobs, small incomes and untold pressure.

But despite the obvious risks, applications for arts related programs are thriving. Algonquin College has created two new programs in the past five years – music industry arts and performing arts – to respond to this growing interest. With almost no marketing, music industry arts received 250 applications in their first year. This year, they received almost double that number. Applications are also rising at the graduate level of the University of Ottawa’s theatre arts program, while the bachelor of music program at Carleton University remains at maximum capacity, with far more applications than they have space for.

Robyn Heaton, dean of Algonquin’s School of Media and Design, watches market and labour trends to gauge which programs students may be interested in. She said that before the performing arts program was introduced last year they did a scan of other Ontario colleges to see if performing arts programs were in fact attracting applicants. And they were.
“I think that (younger) demographic is interested in not just having a career, but in having a career in something they’re passionate about,” Heaton says.

And that is why Dickey chose to take theatre. He had been planning to study biology, but he made the switch to theatre last minute. “This is where I have the most fun,” he says. “And I want to see how much longer I can do it and where it will take me.”

His parents were slightly doubtful, but supportive of his sudden program switch. “They asked if I had any plans for jobs – the typical thing,” Dickey says. Both parents are phys-ed teachers, and originally Dickey thought of going into teaching after graduating. Now he isn’t so sure. The reality of having to find an actual job in a few months is a little daunting. But Dickey isn’t afraid of hard work, long hours or doing jobs that others would consider menial. “The real thing is putting yourself out there,” he says. “Doing the work. Maybe just doing a few small parts, and working up from there. You gotta start somewhere.”

But for Emma Fleet, a third-year music student at Carleton University, it isn’t so much about where she will end up afterwards; it is simply about studying something she loves. Fleet’s mother is a musician, and her father studied music, but ended up leaving the field when he had three children to feed. Fleet’s mom taught violin from a studio in her home, and Fleet spent much of her childhood in that room. She would sit on the floor and sing along with her mother’s students. “My mom gave me a violin when I was four,” Fleet says. “I would just do scratchy noises on it, but I had a lot of fun.” But she also saw the downside of the career. Her mother often had a crazy schedule. She would be in a concert and not get home until 1 a.m., and then have to get up early the following morning to get the kids ready for school. “My family is really, really happy,” Fleet says. “You see that my parents do what they like doing. But the money issues are always there. It’s kind of stressful.” Although she enjoyed music, Fleet decided in high school that she wanted to pursue anything but. She had seen what it was like to be a musician first-hand, and she wanted to get away from it. Instead, she took science in Cégep and then tried psychology for one year in Montreal. “It was the worst decision I’ve ever made,” she says. “It was too scientific still. I had to go back to arts. I had to go back to music.” Picking up her violin again was both relaxing and comforting. “I think it is the ambience,” Fleet says. She played in an orchestra and was part of an ensemble. “I always loved that we were playing together and doing something together,” she says. One of her first classes was applied rhythm, which involved dancing, playing drums and trying to figure out the pulse of music. “My homework was basically dancing. Like, that’s fun, right?” she says, laughing. Fleet doesn’t want to go into performance because she finds it stressful, but she might play in an orchestra part-time. Right now she is thinking of continuing her studies and then teaching music at a university level. Fleet’s story describes many students who come to realize that they must study what they love, despite the uncertainty afterwards.

“I never really had a choice. It was always kind of this way,” says Daniel Younger, a print media graduate from Algonquin, referring to his love of expression. Younger has been a bookworm since age two. With a grandmother who painted and a mother who made pottery, creativity is instilled in his genes. He took print media – a program which is no longer running – to understand the other side of writing books: producing them. Now, he is an author who also runs his own self-publishing business, called Mutant Panda. He writes comedic fiction, and enjoys creating
kooky characters and making people laugh.

“If you have a story in your head, I think it’s important to tell it,” Younger says. “Whether or not people like it, that’s up to them.” Because he has to maintain another job as well, Younger has had to sacrifice time, friends and a healthy sleep schedule to keep writing. “The business side says, ‘Oh that’s a risk,’” he admits. “But the artistic side says, ‘Yeah, that’s the point.’” Unfortunately, many people don’t choose to take those risks because they are afraid of failing.

“When we’re in survival mode, we forget that we get to make choices,” says Catherine Kenney, coordinator of the performing arts program at
Algonquin. “We think: this is our direction, and we forget the backroads, or the pleasure routes.” Kenney has watched countless students over the years, fumbling to find their way in the world. She said that many people follow another path because they try to fulfill others’ expectations, or because they think there are no other options. “You have no idea where you are going to go in life,” says Kenney. “But the fear of making the wrong decision really closes us.” That fear of failure can be paralyzing. But for students who choose to pursue their ambitions, being happy is often more important than security and predictability. In the end, passion overcomes fear. There are actors, musicians, writers and filmmakers who have succeeded. That is enough to make students like Dickey want to try too. He has already done a few shows around Ottawa, and plans on continuing to find auditions, and do performances with his friends after graduating. He might even start his own theatre company. “I’m going to give it my best shot, and if it doesn’t work out, it doesn’t,” he says. “But you never know until you try.”