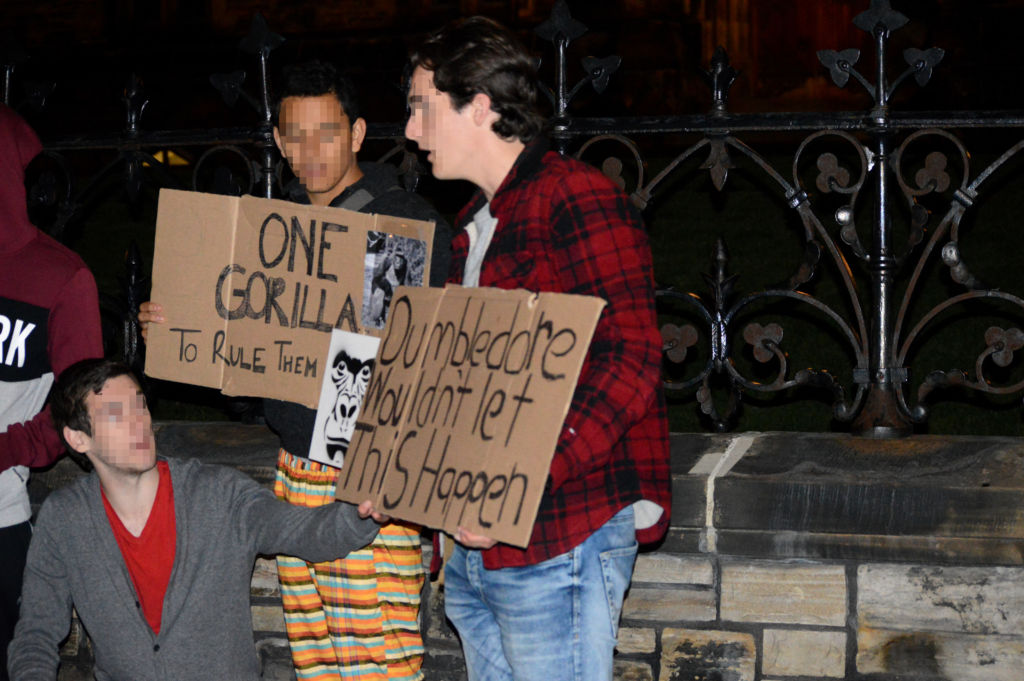 Two participants hold protest signs that read "One gorilla to rule them all" and "Dumbledore wouldn't let this happen".
Photo by: Wade Morris

On Sept. 23, 2016, more than a thousand students marched from Parliament Hill throughout Wellington Street. Some held protest signs, others wore gorilla costumes and many proudly held candles. As they chanted down the street, you’d think their passionate protesting was completely serious and purposeful – after all, when you have a problem in Ottawa, you protest it on Parliament Hill.

But this protest was different from those you’d normally see at the Hill. The night of ranting and raving and candle-lighting was held in honour of one of 2016’s most bizarre phenomena: Harambe the gorilla.

If you’re not familiar with the name, Harambe was shot and killed at the Cincinnati Zoo this May after it was deemed by zoo staff as dangerous to a child that found its way into the gorilla’s enclosure. Footage of Harambe’s encounter with the child was released, putting the mildly controversial incident into national headlines. You wouldn’t expect the story to go far beyond roundtables on CNN or The View about animal ethics. But the internet felt strangely endured to the 14-year old gorilla’s death. Thus, a meme was born.

Fast-forward back to September.

The night began as a candlelight vigil, with candles being lit and placed around Parliament Hill’s fire. Participants began to repeatedly chant, “d-cks out for Harambe” in unison, in reference to the meme’s phrase of action. (Fortunately, the phrase was only chanted, and not acted upon.)

Of course, it wouldn’t be an event of mourning without a bagpipe player. One emerged into the crowd and played as observers held candles in silence.

Aside from police officers watching over the Hill, there were few people over the age of 25. Adults probably aren’t as much invested in Harambe’s death, judging by an overheard conversation between two of the officers.

“Do you think this is funny,” one asked.

“Not really,” the other answered, after a bit of hesitation.

A voice equipped with a megaphone led the crowd from Parliament Hill to a nightclub called Tequila Jack’s. The march lasted about half an hour, until protestors either entered the club or left. 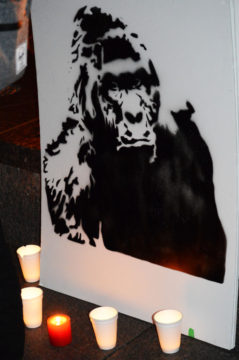 A poster of Harambe, mimicking the setup of an actual funeral.

The vigil’s creation was as strange as the event itself.

A Carleton student and three OttawaU students created a Facebook event called Candles Out For Harambe a few weeks before the event was set to take place.

“I saw that Laurier University was holding a candlelight vigil for Harambe,” said Jesse Bélanger, one of the four organizers, of the event’s inspiration.

The event slowly made its way all over the Facebook timelines of Ottawa’s youth. In just over a week, 2,000 people pledged that they would attend.

Still, some found the event page perplexing. Was it all a joke? Would people actually spend their Friday night at a meme funeral?

“We then created the event as a joke,” said Bélanger. “We initially thought some people would sign up, however, we never expected this much draw.”

Abdou Sarr, one of the four organizers, assured Facebook users that the vigil would indeed take place on Sept. 23, and that he hoped there would be media coverage.

Sarr created a press release for the event. In it, he stated that “(Candles Out For Harambe) is truly set to be a spectacle that should be reflected in the local media, demonstrating the power that social media possesses.” Coincidentally, ‘harambe’ translates to ‘pull together’ from Swahili.

The event even caught the attention of Tequila Jacks, the club that served as the march’s destination.

Staff members of the club discovered the event’s Facebook page and made an agreement with the organizers to hold its official after-party. The result was successful.

“It was busier than normal for sure,” said Ronnie Wray, a marketing director behind the after-party.

Ending on somewhat of a happy note, Tequila Jack’s sold a special drink that night called the “Harambe bomb”. Costing five dollars, its proceeds went toward initiatives against animal cruelty.

“Although (Harambe) is a meme that has gone viral, I figured it could bringing awareness to cruelty in zoos,” said Wray.

Whether or not Candles Out For Harambe made a significant dent against animal cruelty, or truly put Harambe’s soul to rest, it made for one of Ottawa’s most strange nights in recent memory, and proved that anything can happen in the digital age.