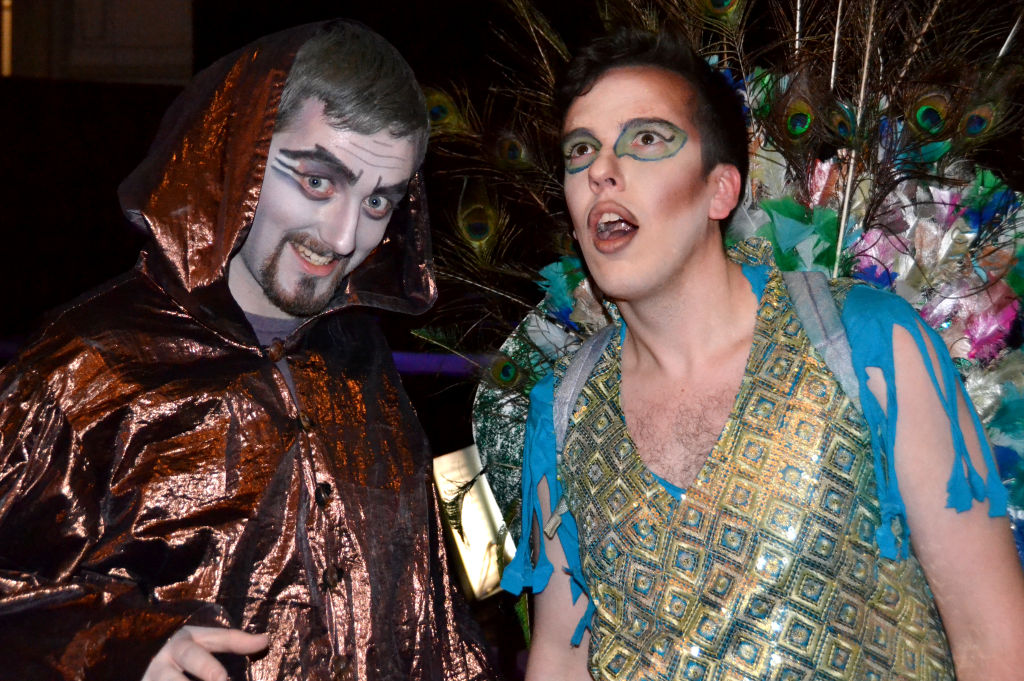 Grayson Nesbitt and Adam Kuiack pose for a photo after performing Mozart’s Die Zauberflöte (The Magic Flute) at the University of Ottawa on March 4. They played Monostatos and Papageno respectively.
Photo by: Caleb Nickerson

When most people think of the opera, they think of large women in horned helmets accosting each other in a foreign language. So when I saw that I could take in an opera at the University of Ottawa for all of five dollars, I was intrigued. Do people still go to these things?

To get an insider’s opinion, I called opera singer Tonatiuh Abrego. He thinks that the use of foreign languages and the relatively high price point are why many people never give opera a chance.

“I don’t think it’s inaccessible, I think it’s a matter of familiarity,” he says.

He thinks people don’t realize how much expense goes into a production with a professional orchestra and a cast of professional actors. Abrego points out that people wouldn’t bat an eye to pay equivalent amounts to see the Kanye or U2.

He also thinks that people don’t realize the breadth or the genre. Abrego points to an opera based on the life of Anna Nicole Smith as an example of how the modern opera scene is adapting to appeal to wider audiences.

When I arrived for uOttawa’s production of Mozart’s Die Zauberflöte (The Magic Flute), there was a crowd of roughly 200 people packed in the concert hall for the performance. As I headed for a seat near the back of the room, I couldn’t help but notice the amount of young people in the audience.

The next thing that struck me as I sat down was the scale of it all. A choir and an orchestra backed up the cast of singers, making for a rather large ensemble.

From what I gathered from the pamphlet, the play was about a two food-loving guys searching for their respective ladies, while some perv named Monostatos chased them around. Then one of the ladies had to stab someone with a knife.

Even with a handout, I found the plot somewhat hard to follow, though the display of talent by the students was incredible. Powerful voices backed by beautifully played music made for an entertaining story that could be at times serious and others silly. At two hours, this was one of the longest musical performances I’ve ever sat through, and the performers’ ability to work in cohesion for that long spoke to their skill.

I interviewed oboist and 4th year music student Jonathan Werk after the show and he revealed that the orchestra had been practicing this opera intensively for the past three weeks, but the singers had been working on it for much longer.

He was pleased with how the night went.

“I love this opera,” he says. “I love the way the humour was mixed in with the music.”

Looking back, my first opera was much like my first Hawaiian pizza. I was skeptical and a little confused at the start, but after I experienced all the individual elements working in harmony I managed to enjoy myself.