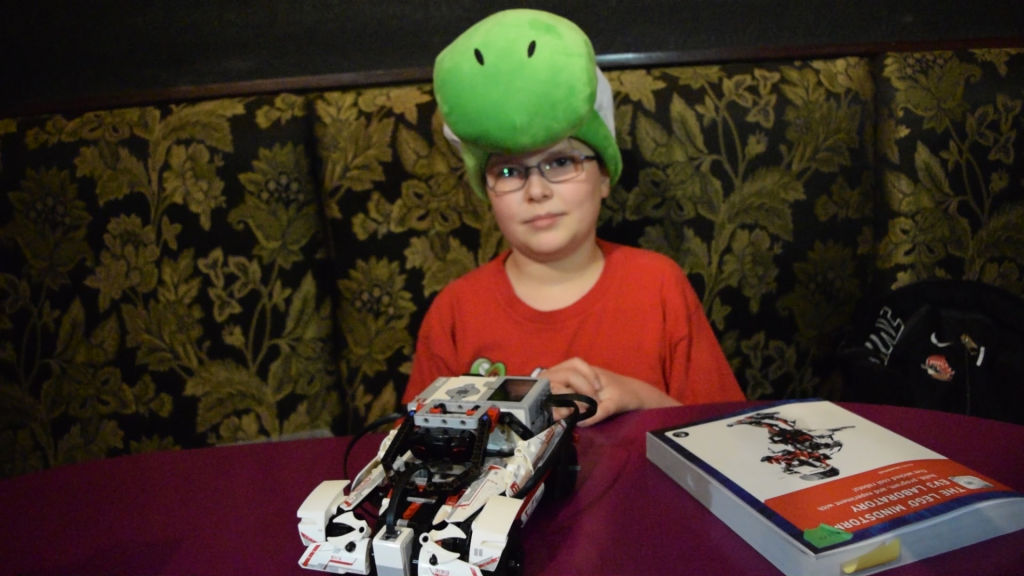 Leo Zarins, 11, showing off his new creation. His Lego robot can be programmed to follow coloured lines.
Photo by: Orlando Blacksmith

I have met a handful of interesting people attending 613Smash’s events, Ottawa’s competitive Smash Bros. scene. But none can compare to Leo Zarins, an 11-year-old boy who is taking a grade 12 robotics course online.

“I did this all today, it took about eight hours,” says Zarins proudly. “But I have to modify the program so the remote control can change what it does.”

Zarins has been home-schooled his whole life.

Now, at the age of 11, Zarins still studies from home and takes a plethora of online courses, one of them being a grade 12 robotics course.

“It’s a lot of fun,” he says. “I want to work for the Royal Canadian Mounted Police. But, if possible, I’d like to make robotics a career. For now, it’s just a hobby.”

He also takes an elective on languages where over the course of 15 weeks, he is taught the basics of six languages: French, Italian, Spanish, German, Russian and Arabic. This semester, he is taking the second level in three of these languages more in-depth.

Zarins’ mother, Mara Zarins, has been raising both her sons with their futures in mind.

“I’m more of a tech person,” she says. “I read IBM manuals to them when they were babies. People tell me that I robbed them of their childhood, but I think I’m allowing them to have a brighter future. Everyone is a different kind of parent.”

The family lives in Kanata, where Leo and his brother have been home-schooled his whole life.

“[My mom] gives me a lot of support,” he says. “[She] takes me to tournaments, helps me balance school work and Smash, wishes me luck at tournaments and helps me out.”

When Leo isn’t focusing on his schoolwork or creating robots, he is playing Smash Bros. for the Wii U.

But on a typical day, Leo is focusing on homework and working towards finishing his schooling and creating a robot once a week, as to his curriculum for his robotics course.

“The favourite robot I’ve created is something that looks like a snake,” he says. “It [slithers] around and picks up objects in front of it. I have to create a new robot every week and hand in videos and photos.”

“I only started a few years ago,” he says about his robotics lessons.  “But I’m really interested in it.”