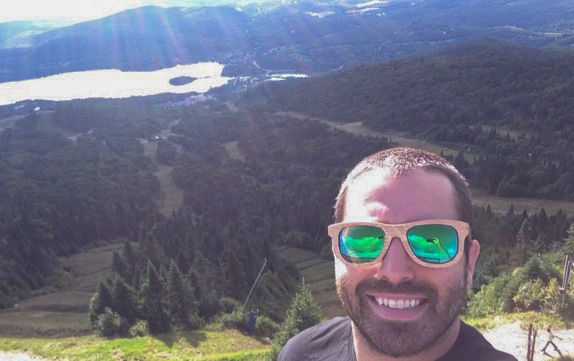 Justin Towell, owner of Bamboo Clothing Co. in Mont Tremblant, QC during the summer of 2014.
Photo by: Justin Towell

Stowed away somewhere in an old shoe box, Justin Towell has Nike shoe designs from the third grade that he one day hoped to create. With a passion for creation and innovation from an early age, Towell is now 33 and is the sole backbone of Bamboo Clothing Company.

Bamboo Clothing Co. is a lifestyle eShop that features sustainable bamboo products from a number of brands that Towell curetted into one online store. Some of the products include active wear, skateboards and watches.

Since its creation, the Ottawa start-up has branched to international retail. It is even developing custom prototypes for bamboo underwear and socks– something that many consumers may have never even heard of.

In terms of the multi-brand platform, specific to bamboo centric merchandise, Towell says his company is the first of its kind. The e-commerce aspect was officially incorporated this February. And even more recent, Towell launched a new campaign for the business: #StayWild2016.

“The campaign is about encouraging authenticity and sticking to your roots. It also encourages getting outdoors ” says Towell.

After stumbling across his first pair of bamboo socks in Vancouver, B.C., Towell was inspired to create his company. The health conscious society, Asian culture and people of Vancouver also served as motivation for his work. Kaboom! Clothing Co. was the initial name of his enterprise, but it was rebranded and redesigned in 2014.

The acknowledgement received, and friends made within the Ottawa region, has encouraged the growth of the business. Jallila Singerff, a friend of Towell’s, met him in Ottawa during the early stages of his company development at a social networking event.

Singerff is a graduate of business–marketing at Algonquin College and studied communications at Carleton University. Currently working as a public relations representative for Joseph Ribkoff clothing in Montreal, Singerff has kept in touch with Towell throughout his career.

“I’ve seen some of the processes he’s gone through in the past three years,” Singerff says. “His company is innovative and cool. Being involved in the fashion industry, I see the demand and relevance towards his products. Not only is it fashionable–it’s sustainable and environmentally friendly, which is the way the industry should go.”

Given how niche the company and market is, business has been profitable for Towell and the industry has potential for market growth, especially in Canada and the USA. Towell’s company profits not only from consumer purchases and business to business interactions, but it is also involved in a number of global initiatives. These initiatives aim to help fight climate change through introducing these sustainable bamboo products.

Familiar to working within niche start-up companies, Dean Horsfield served as a mentor to Towell. Horsfield created Experience Headphones in 2013, which is an e-commerce business with a retail store in Vancouver. The two became friends about five years ago when they were both developing their companies.

“We used to bounce ideas off of eachother,” says Horsfield. “If I wasn’t doing my own business right now, I know I would be investing in his.”

Horsfield says there is a lot to learn when getting involved in the start-up business world, especially using e-commerce platforms, which are fairly new to Canada. He feels that forecasting profit and analyzing income is important, but having the passion and desire to keep pursuing your business’ dreams is the true key to a successful start-up.

Horsfield feels Towell is a perfect example of a passionate and driven business owner.

“He’s been at it for a while and his company seems to be doing well for itself,” says Horsfield. “I look forward to seeing it grow.”