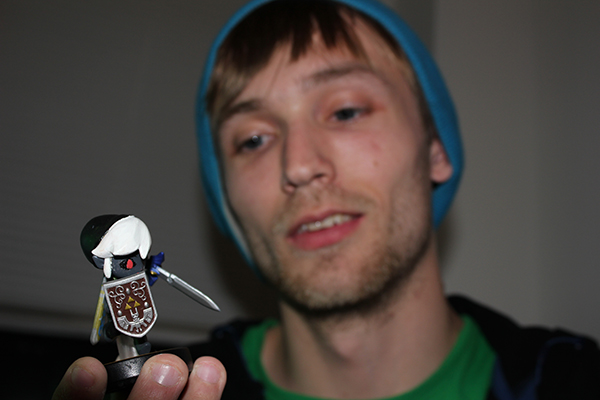 The Toys to Life phenomenon has steadily been on the rise since Activision first released its Skylanders line of products in 2011. Toys to Life products are small figurines which enhance the experience of certain video games.

Nintendo is one of the companies who have sought to capitalize off of the Toys to Life trend by releasing their own line of products known as Amiibo. Amiibos were first introduced to North America in 2014 to much fanfare and just as quickly as the figurines attained international popularity, so too did the trend of having Amiibos customized by artists like Ottawa’s Joshua “Sinad” Gibson.

Gibson, 24, is a Communications graduate from Algonquin College who is an active Twitch streamer. Twitch.tv is the premiere service for watching video game streams, but in 2015 the site revealed its new Creative section where artists like Gibson could showcase their talents to a live audience. On his Twitch channel, he will do commission pieces for people who usually want a palette swap for their Amiibos or to have one of their game controllers customized.

Some custom GameCube controllers which Gibson will be touching up.

Gibson got into model painting in high school thanks to the tabletop game, Warhammer 40, 000, which features armies of minuscule characters that players would paint in order to have a cohesive theme.

“A buddy of mine got me into it and showed me the ropes. From there, I picked up my own painting style and it’s definitely transferred over to these custom Amiibos I’ve been doing for fun and commissions,” says Gibson. “For brushes I generally tend to use the smaller finer tipped ones and for paints I’ve been a big fan of Citadel paints but they’re getting harder to come by outside of specialty shops.”

He’s able to maintain a regular streaming schedule on Twitch thanks to the very active Amiibo community, which can’t seem to buy up the little plastic figures quick enough. For Sam DeGeer, product processing supervisor at Best Buy, the hordes of Amiibo seeking customers are relentless whenever a new release happens.

“The day of release we always had a lineup and customers would sprint to the gaming section to be the first to claim whatever merger stock we had been shipped. Once we ran out we would get constant requests to call other stores on behalf of the customer to reserve the item in question,” says DeGeer.

Gibson thinks part of the reason Nintendo’s foray into the Toys to Life market has been so successful is because buying an Amiibo is the only way to get a collectible figure for characters like Marth from the Fire Emblem series who aren’t household names like Mario and Luigi. He feels that’s part of what drives people to get the figures customized as well.

“It’s the transference aspect. It’s the ‘this is one of a kind and it’s mine’ feeling. That’s the reason people are willing to pay not just for the materials, but also for the hours required for this kind of work,” says Gibson.

Customization isn’t for everyone, though. Avid Amiibo collector Kyle Gardner, an Algonquin Game Development grad who is currently a software developer at Smoke Labs, prefers not to remove his figures from their packaging. “I like to keep my latest Amiibos in the box because I don’t really use them. Might as well keep them pristine,” says Gardner. But even he can’t deny the appeal of the idea, “If I had to get a custom one, I might get an extra of my favourite and get it engraved or something. That’d be cool.”

For anyone that wants to get in touch with Gibson for custom work or to watch him do a commission piece, the best way is to tune in to his Twitch stream at http://twitch.tv/JoshuaSinad or to look him up on Facebook at Joshua Gibson.