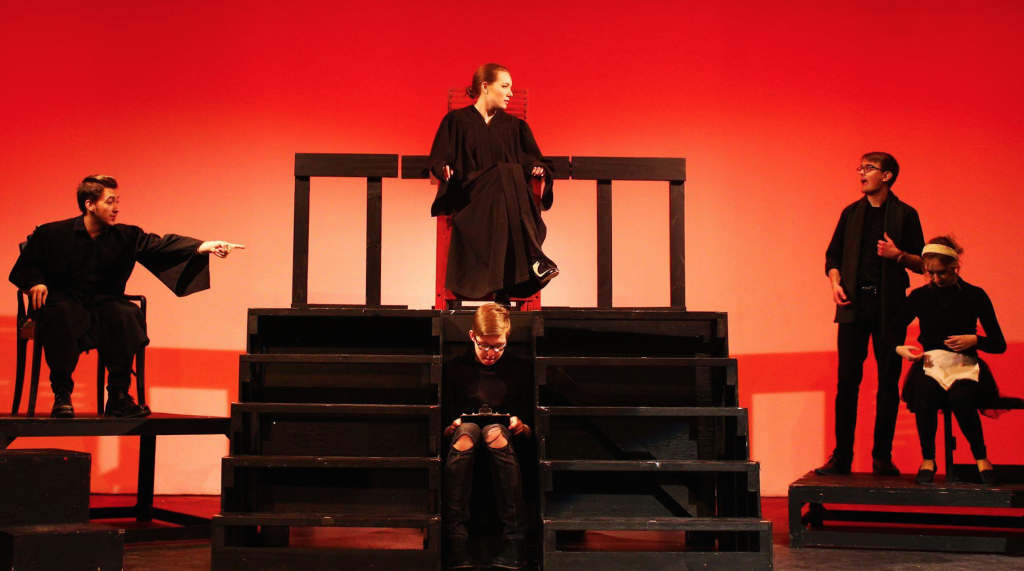 “Aside from being about a gruesome crime,” says Kevin Nimmock, Sock ‘n’ Buskin’s co-artistic director. “It really is about perception of intelligence and how none of us are as smart as we think we are.”

Alfred Hitchcock’s Rope, the company’s third show of the season, is a murder mystery with a satirical and philosophical kick.

“It’s about these two college students who believe they can execute the perfect crime,” says Ian Gillies, a five-year Sock ‘n’ Buskin veteran. “The deal is, they murder someone at the beginning of the show and they keep the body in a chest in the middle of their living room and they invite over the victim’s friends and family to have a party.”

“It’s obviously serious in terms of content,” says Nimmock, 21. “It’s about two students that murder a classmate, but it’s also full of rife comedy, and moments that really make you think.”

Founded in 1943, Sock ‘n’ Busk is currently Carleton’s second largest club on campus. From acting to directing and all the jobs in between, the company is solely operated by students.

“On the majority, it’s definitely a hobby for most people,” says Gillies. “But I know several people that have worked in the company for a while who have gone on to pursuit acting as a professional thing. So they really establish a love for it.”

From September until April, there’s much work to be done. It can take them 2-5 months to complete the production of a show. There’s auditions, rehearsals, advertising, countless meetings and of course, the big night.

Nimmock, who first started with the company three years ago, when he auditioned and got the part of Brad for Sock n Buskin’s production of The Rocky Horror Picture Show, says he puts in around 10-20 hours every week to prepare for opening night.

“We’ll try to do a minimum of four performances of each show,” says Nimmock. “To try and give actors a chance to have their friends and family come see them a number of times, but also to grow into their part.”

It’s not exactly an easy task to produce plays, let alone four or five every season while balancing school, but Nimmock says it’s more than just a company. He spends a great deal of time soaking in the environment; living in it.

“We’re a mix of a company who, I believe, puts on a really good show,” says Nimmock. “But also a social group. It’s important to be a part of that social community on campus because community is a really core value of what we’re trying to create.”