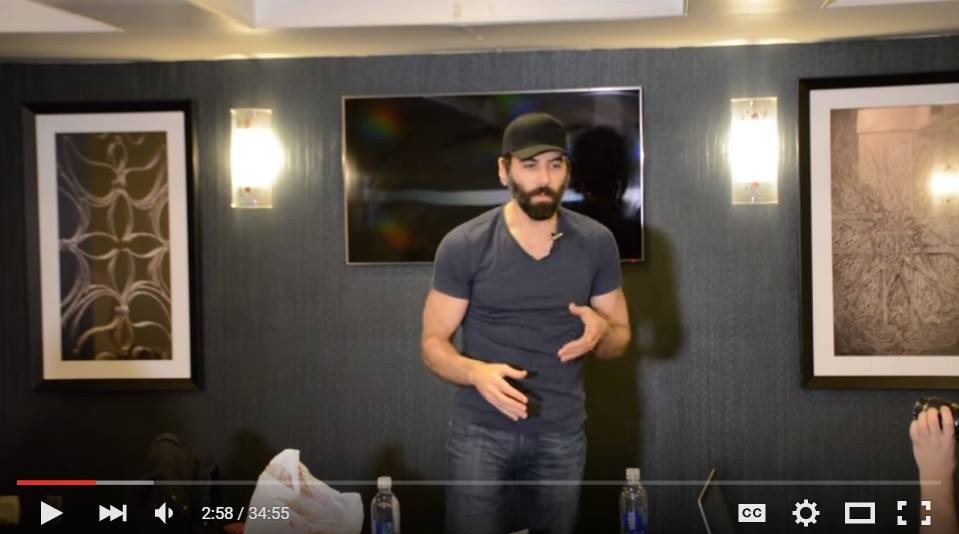 Global protests were carried out on February 6th in response to an international meetup planned by Daryush “Roosh V” Valizadeh, a former pickup artist and notorious anti-feminist blogger at Return of Kings. The meetups were allegedly cancelled on Valizadeh’s forum, but when the site was made private, evidence emerged that suggested the meetings were being conducted in secret. 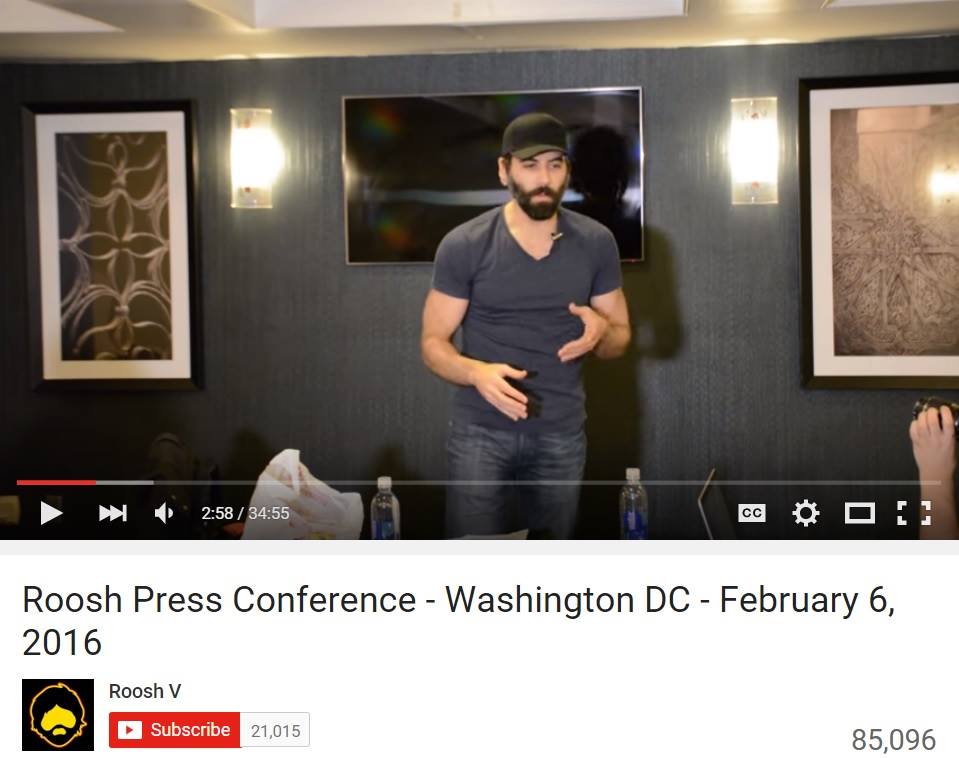 While protestors were unable to access location information, many took to the streets to make their stance against Valizadeh and his followers known. Protests ranged from peaceful gatherings, to operations that saw people monitoring possible venues that would be attended to make sure women were not harassed and got home safely.

Earlier that evening, Valizadeh held a press conference to explain the purpose of his planned meetups, and the misinformation that had been spread by the media. Valizadeh accused the media of lying about him being a “pro-rape advocate,” and that the gatherings were a “rape rally.”

“I had organized meetups around the world for men to enjoy a social happy hour,” says Valizadeh in the press conference video. “Just to meet in private to talk about anything: work, politics, girls. Just to meet.”
Numerous threats have been levelled against Valizadeh from around the world in the past, but were renewed when word of his international meetups got out. A few days after the information was released and compromised meetups were reorganized, Valizadeh was doxed by the internet hacktivist group Anonymous.

In addition to releasing his personal info, Anonymous also threatened to dox everyone subscribed to Valizadeh, and launched a powerful DDOS attack against several of his websites, shutting down his followers’ access to information regarding the meetups. A DDOS attack, or distributed denial-of-service attack, is an attack that is capable of taking down a website. 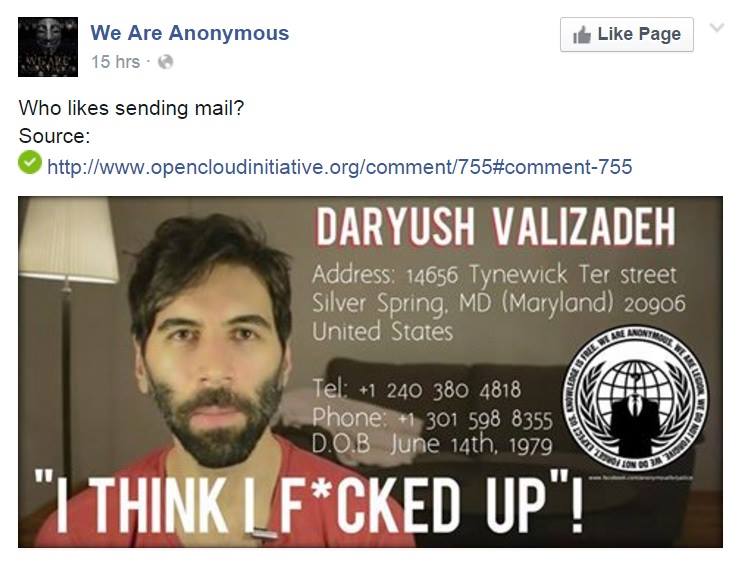 After being harassed, threatened, and having his personal information leaked on the internet, Valizadeh finally cancelled the meetings, citing concern for the wellbeing of himself and his followers. The irony is, of course, that these are the exact tactics he has used in the past against prominent feminists and people in general who have openly disagreed with his views online.

Governments from all over and from different levels were called on by citizens to put a stop to the meetings. The surreality of the situation came to a pinnacle when the Australian government called in its Navy in response to Valizadeh’s claims that he was going to infiltrate the country via private yacht, and the House of Commons debated over banning him from entering the UK.
The push to prevent Valizadeh’s meetups from happening did not stop there.

“Police from everywhere said that all meetups will be monitored. A private meetup for men is going to be monitored. 1984 is here,” says Valizadeh in the video. “You have to understand that your work and the work of your colleagues have incited a mob, based on lies, that has put my family in danger.”

The media’s eagerness to jump on the story did result in a lot of misinformation. The meetings were not part of a “rape rally”. Valizadeh’s meetings were for men in his following that lived in the same area to get together in person instead of only socializing online. If the meetings had four successful, subsequent meetups, then the information about them would be added to a tribal meeting map marker for current and future Return of Kings members to access to meet other like-minded men.
It is easy to see why the media and society in general reacted the way it did. A post Valizadeh made on his website a year ago titled “How To Stop Rape” proposed to stop rape by making it legal on private property. Valizadeh claimed that sexual assault rates would be nonexistent on the first day the law is implemented, after months of advertising that the law would be coming into effect. Valizadeh argued women would take more precautions to prevent themselves from being raped, and not go home with men they did not want to sleep with. He later said this was satirical and Swiftonian in nature.
However, this is not the only post that suggests that Valizadeh is “pro-rape.”
He has a post on his page titled “When No Means Yes.”
He claims that women should have all their decisions made for them, including who they sleep with.
The books are guides dedicated to discussing his sexual exploits and techniques he uses on women both in the U.S. and abroad. Many of his techniques involve coercing, cajoling, and even physically pressuring women into having sex with him.

“While walking to my place, I realized how drunk she was,” writes Valizadeh in one of his most notorious admissions in his book, Bang Iceland. “In America, having sex with her would have been rape, since she couldn’t legally give her consent. It didn’t help matters that I was relatively sober, but I can’t say I cared or even hesitated. I won’t rationalize my actions, but having sex is what I do.”

What Valizadeh fails to realize is that Iceland has the same consent laws as North America. Whenever his writing is brought up as proof of his sexually violent nature, he dismisses it as being taken out of context. However, paragraph after paragraph, in several of his books, reveal his predatory nature. Reggie Yates from BBC also recently did a short segment on Valizadeh in his documentary Men at War noting the disturbing content of many of the books in the Bang series.
It is difficult to say whether or not Valizadeh’s views and the planned meetups are legal. Adam Norton, a third-year Masters law student at Dalhousie University, says that the legality depends on the finer details of the case.
“They could meet and then the police would likely break it up. There are major safety concerns with all those involved in this meetup,” says Norton. “There are many ways that afterward they could be charged or pursued civilly, but it is hard to injunct the meetup in the first place.”

While Valizadeh and followers have the right to peacefully assemble, whether or not they can be charged with hate speech depends on several factors, all of which must be met.
Despite the negative and even violent backlash he has faced, Valizadeh announced at the press conference that he would utilize the media’s coverage of him, and turn it into “money and women.” In response to the media’s misinformation prior to the meetups being cancelled, Valizadeh created a counter-project. “Operation Bullhorn” was initiated to collect the articles written about Valizadeh and his meetups and information on the journalist who wrote it so they could come after them later.
Many of his supporters on reddit and twitter taunted the opposition with notions that they had fueled a free marketing campaign, and that everyone including the media had played right into Valizadeh’s hand.

David Futrelle, an American journalist, has been tracking online misogyny via his blog wehuntedthemammoth.com, and Valizadeh has appeared on his radar many times over the years for his misogynistic, trans and homophobic, and even racist views.

“It’s hard to tell [whether he has won]. It probably increased the sales of his books, and I’m sure it got a lot of people to look at his website,” says Futrelle. “They say that all publicity is good publicity, but I really don’t think convincing the world to hate you is necessarily a great career move on his part.”
Futrelle also notes how Valizadeh’s writing material has worn thin over the years and any sort of popularity he has is on the decline, visible via his sites’ traffic statistics.
“He’s been losing readers for quite some time and he also just seems to be at this weird personal crossroads where he built this little empire on writing these books about pick-up, and now he’s sort of entering into a bitter, middle-age, where he just doesn’t want to do that anymore,” says Futrelle.
“The thing about pick-up artists is that they’re constantly going out and getting rejected by most of the women they proposition. I think he’s tired of that and he wants to convert himself into this philosopher of masculinity, but…he really doesn’t have an original idea in his head.”
Valizadeh maintains that his meet-up was legitimate and not a stunt to attract media attention, but is apparently enjoying the virality of his press conference video.