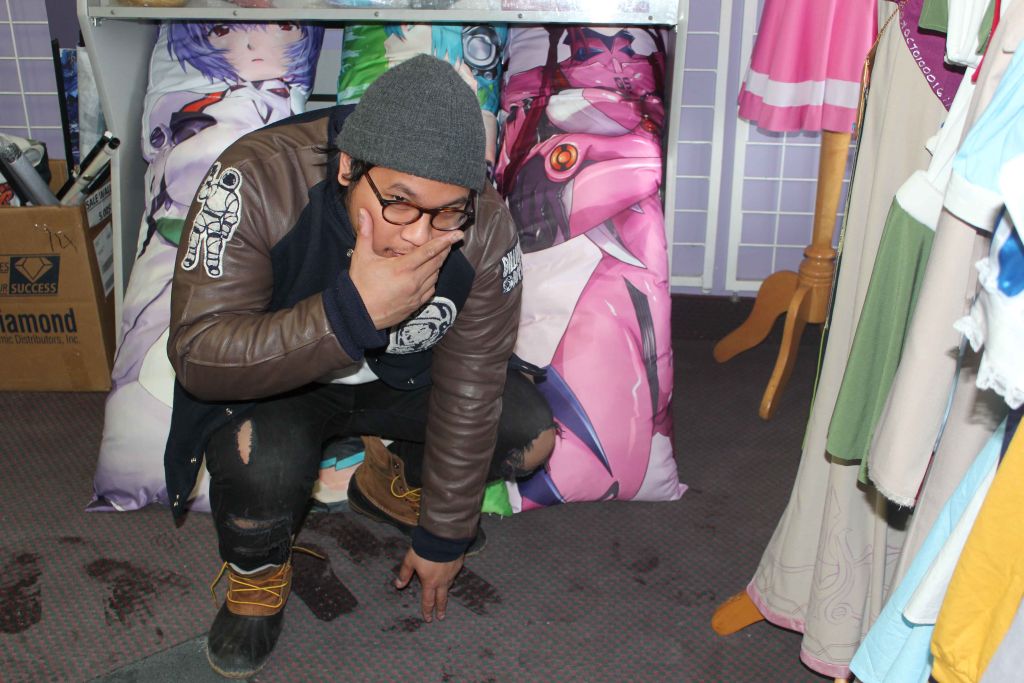 Eddie Quotez crouches by some of the anime body pillows on sale at the Anime Stop on Merivale Avenue.
Photo by: Marc Shaw

The worlds of anime and hip hop have developed a strange synergy over the last few years. For Ottawa rapper Edgar “Eddie Quotez” Piol, the first time he heard anime inspired lyrics was Lupe Fiasco dropping a reference to the Lupin III on Kanye West’s Touch the Sky.

He recently dropped an anime inspired project of his own, the four hour EP Kawaii, and is riding a small wave of internet buzz he’s been generating since performing at Bluesfest in 2015. He feels that social media knowledge is important for an upcoming artist. “It’s vital, it can end careers” he says.

Bluesfest coordinators asked Piol to submit his social media information to them and, once they felt that he had built a small following on his own, accepted him as a performer. According to him, the internet has also been one of the forces driving the collision between anime and hip hop that has been fueling his creates process as of late. 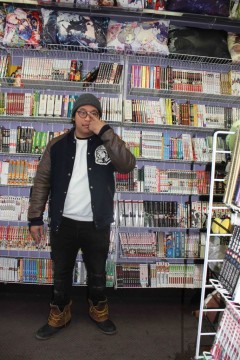 Eddie Quotez hanging out in front of an extensive manga collection.

The term ‘Otaku Rap’ is being used to describe this burgeoning genre of anime influenced hip hop music. In Japan, the word Otaku references someone with a specific interest. A hip hop Otaku would roughly translate into ‘hip hop nerd’ and have pejorative implications. In North America, the word has taken on a different meaning and is instead used as a term of endearment for those enamoured with Japanese anime culture.

Online forums like Reddit and 4chan have been spreading the work of Otaku rappers like VI seconds and Josip On Deck amongst forum participants. The success of those artists online has contributed to the growth of Otaku rap. “I think it’s huge because it spreads like wildfire in those kind of forums,” says Piol.

Eldred Ryan, freelance cartoonist and co-founder of NXG comics is an old school hip hop head and grew up as a big fan of comic books and anime. He’s firmly entrenched in the Canadian geek scene, attending many conventions like Montreal and Ottawa Comic Con to represent NXG. He feels that the stories told by western comic books and eastern anime have a lot in common with the narratives present in hip hop music.

“It’s the basic concept of coming from nothing into something and defying the odds,” says Ryan. “It’s the constant struggle to get better than your opponents/other emcees and prove that you’re number one.”

The growing popularity of conventions like Comic Con is introducing geek culture to the mainstream and, just like super hero movies which are accruing more and more revenue at the box office, anime is riding the geek wave all the way into mainstream recognition.

Anime Stop on Merivale Avenue where we caught up with Eddie Quotez to ask him about Kawaii.

Leah Leduc, an employee of the Anime Stop on Merivale Avenue, attends many conventions as part of her job in order to sell merchandise and has witnessed the anime culture’s growth first hand. “There has definitely been a yearly increase of fans and everyone that’s starting to enjoy it. Cosplay is a huge reason why people keep getting drawn to it because it’s a very colorful and people get their eyes caught,” says Leduc. “It’s constantly growing. It used to be such a niche little culture and now everyone can enjoy it.”

Piol thinks that the anime and hip hop connection is quickly approaching mainstream validity. As he works on his next project, an unnamed album meant to follow up the Kawaii EP he knows that he’s on to something and the world is going to be ready for it soon.

“It’s really good that you’ve got people like Waka Flocka dropping Dragon Ball Z lines. Like, Waka? Really?” Says Piol. “This is something all on its own, I can’t really explain it.”