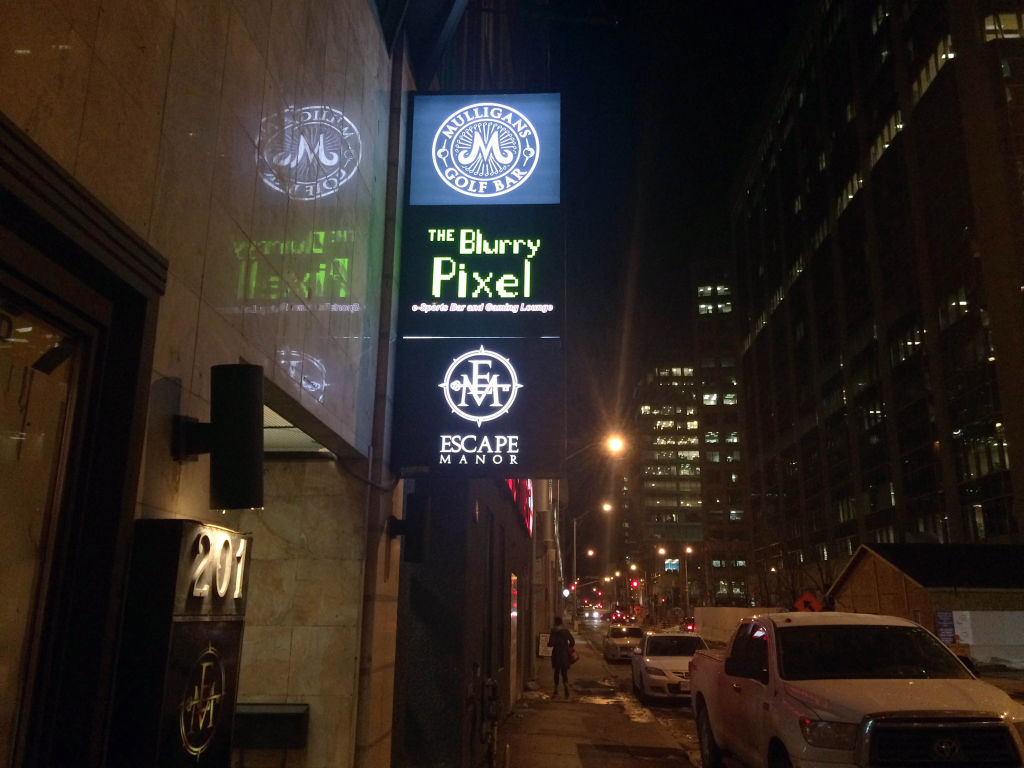 The game is changing for Ottawa night life. Amidst the clubs and restaurants lies something new.

The Blurry Pixel, located at the intersection of Queen and Bank Street, is capitalizing off the recent growth of the competitive video game scene and becoming Ottawa’s premiere E-Sports bar.

Vincent Johnston, 26, owner of The Blurry Pixel, has found a niche in the downtown scene that needs to be filled. “These days, nerd and pop culture, including gaming, is more and more mainstream prominent. I essentially wanted to build a business that would cater to the kind of person I am,” says Johnston. “I wanted to create my dream job and I saw this as an opportunity to do that and make some money.”

The idea of an E-Sports bar is pretty new, but anyone who’s gone to their local watering hole to watch a sporting event shouldn’t have a tough time understanding. The idea of being a spectator to competitive gaming events has taken off thanks to the high profile of games such as League of Legends and Dota 2.

In an age where many popular video games are shifting to online-only multiplayer that doesn’t easily facilitate being in the same room with your gamer friends while you play, The Blurry Pixel is trying to revive the social aspect of gaming. Events like the Evolution Championship Series (A fighting game tournament in Las Vegas with entrants from all over the world, Evo for short) draw in hundreds of thousands of viewers to online streams. Bringing that rabid community together and selling them some food and drink is The Blurry Pixel’s game plan.

Vincent Johnston, 26, owner of The Blurry Pixel hanging out behind the bar while a DOTA 2 match plays out on the TV.

The idea of community is very important to people like Abhay Mehta, Carleton University computer science graduate and mobile developer at Synacor, who is a regular at The Blurry Pixel. Mehta is one of the founders of Nerd Alley, The Blurry Pixel’s small community of fighting game enthusiasts who meet at the bar every Wednesday to play and discuss fighting games.

“I don’t participate in fighting game tournaments, I just prefer casual games,” says Mehta. I was at The Blurry Pixel for this past Evo and it was pretty hype. I think places like BP are important for building a community.”

Johnston went straight into the work force after high school. He spent his first five years working in kitchens and bars before migrating to small contracting because the money was good and he was skilled with his hands.

Thanh Nguyen, business grad from University of Ottawa, is another member of the Nerd Alley community and thinks that E-Sports has great potential as a sustainable business.

“The fighting game community will always exist if there is a business that will cater to their needs and capitalize on this under-serviced market. All the better, says Nguyen. “With the median age of a ‘gamer’ being 31 years old, we are a demographic that is in a transition stage in our lives, some are in school, some are working, some are starting families yet despite all that, we all share a passion for our hobbies that we don’t want to let go.”