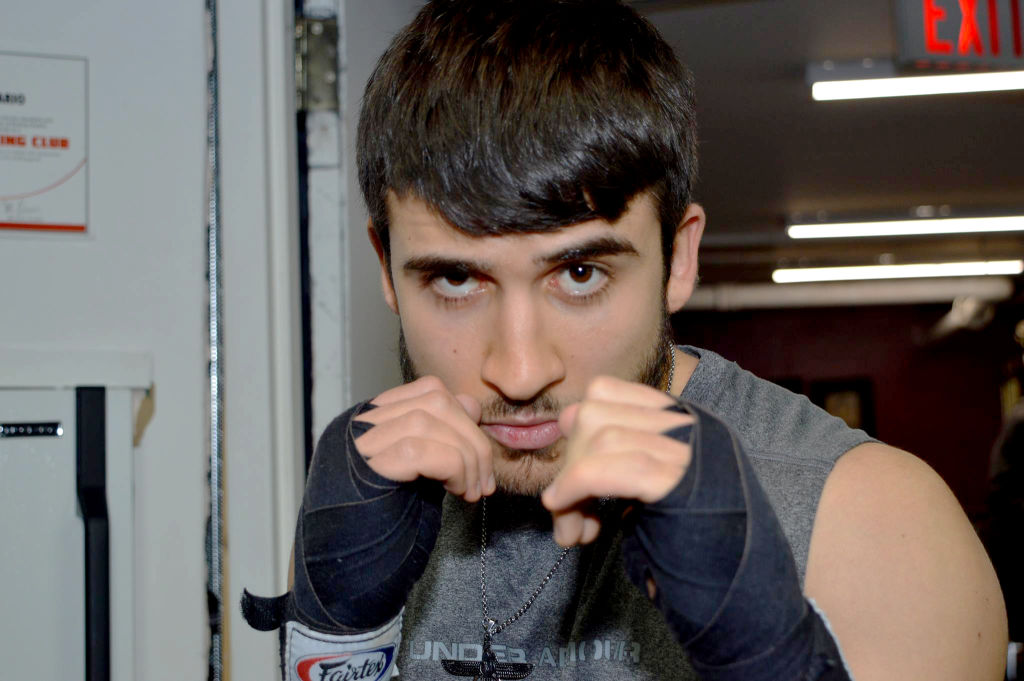 Alessio Mojo puts his dukes up before a training session. Originally from New York City, the welterweight boxer is also a radio broadcasting student.
Photo by: Patrick Jodoin

Growing up in the Bronx and Long Island, New York, Alessio Mojo had been boxing off-and-on since the age of 13. He’s now living in Ottawa, where the 22-year-old’s time is equally split between school and his pugilistic pursuits.

Upon his arrival in the capital to attend Algonquin College, when Mojo discovered the Beaver Boxing Club, he was immediately impressed with the calibre of training the nation’s capital had to offer, and signed up right away.

“This gym is amazing,” says the first-year radio broadcasting student and welterweight fighter. “I decided to stay. I try to come every day. I try to stay disciplined.”

The club was founded in the 1940s. Today, it’s an Ottawa institution.

As boxing continues to rise in popularity—with the success of the Mayweather versus Pacquiao fight last year, and Fox Sports now broadcasting primetime live fights, it’s no surprise the Beaver Boxing Club is getting busier and busier.

Students account for a great deal of this increase. In fact, students comprise about 60 per cent of the club’s membership. While they aren’t all necessarily training every day, like Mojo, students are catching on to the benefits of enrollment. It’s less costly than a regular gym membership, and they’re learning a skill while getting in shape.

“We see a lot of college and university students,” says Elena Bales, who oversees the day-to-day operations of the gym. “And since the fall, we’ve seen a huge increase in participation.”

According to Bales, boxing is a great outlet for young people who may be troubled by bullying, who are out of shape, or who simply need a confidence booster.

“You’re feeling good because of the physical activity,” she says. “You gain some confidence because you’re learning some new skills.”

Beyond their appeal to students, the Beaver Boxing Club is also an interesting case in the landscape of boxing clubs as it defies the paradigm which presents boxing as a boy’s club.

“That’s definitely something that is fairly unique or special about the club,” says Bales about Beaver Boxing’s disproportionate female membership as compared to other clubs. “It’s not so typical.”

This is thanks, in large part, to the tireless efforts of coach and former champ, Jill Perry, who broke barriers throughout her career as a boxer.

“When Jill first started, she really had to fight her way in,” says Bales. “When she started at the club, there was no women’s change room, she had to change in a closet.”

Today, Perry is the club’s resident champ and head coach. She’s currently attaining a master’s degree in coaching from UBC while working with the club’s provincial team.

For the curious readers, a technical class has trainees pair up for a high impact cardio experience which teaches them the proper formations of boxing—a lot of legwork and merciless repetition. No one is actually punching anyone, they’re getting a full body workout unlike anything they’ve ever experienced.

And their members love it.

The Beaver Boxing Club has an infectious quality to it, not like other gyms. It’s a friendly, welcoming environment which encourages self-betterment. They offer the usual equipment of a regular gym, there’s simply less of it. Fewer treadmills, more expertise.

As for Mojo, while simultaneously busy with studies, he’s getting ready for his next ‘show,’ to use the vernacular of the sport.

“It fits perfectly with my schedule here, it works out perfectly,” he says. “I think a lot about school, which takes my mind off boxing a little bit. [In that sense], it’s kind of a detriment.”

According to senior men’s coach, Kevin Orange, the balancing act Mojo must perfect—in order to excel in both boxing and his studies—is nothing new.

“In terms of students I’ve had go through the program, there’s been quite a few,” says Orange.

Despite the duress the combination of school and training places on him, Mojo believes boxing ultimately helps him with his studies. He’s 100 per cent focussed when he’s in the ring.

“The thing that’s so cool about boxing is that the average human being doesn’t want to get hit, right?” he says. “So when you get hit, and you come out the ring—even if you get beat up a little bit—once you come out of the ring, you’ve got some more self-confidence. You’ve come out of your comfort zone—there’s a lot of growth in that.”