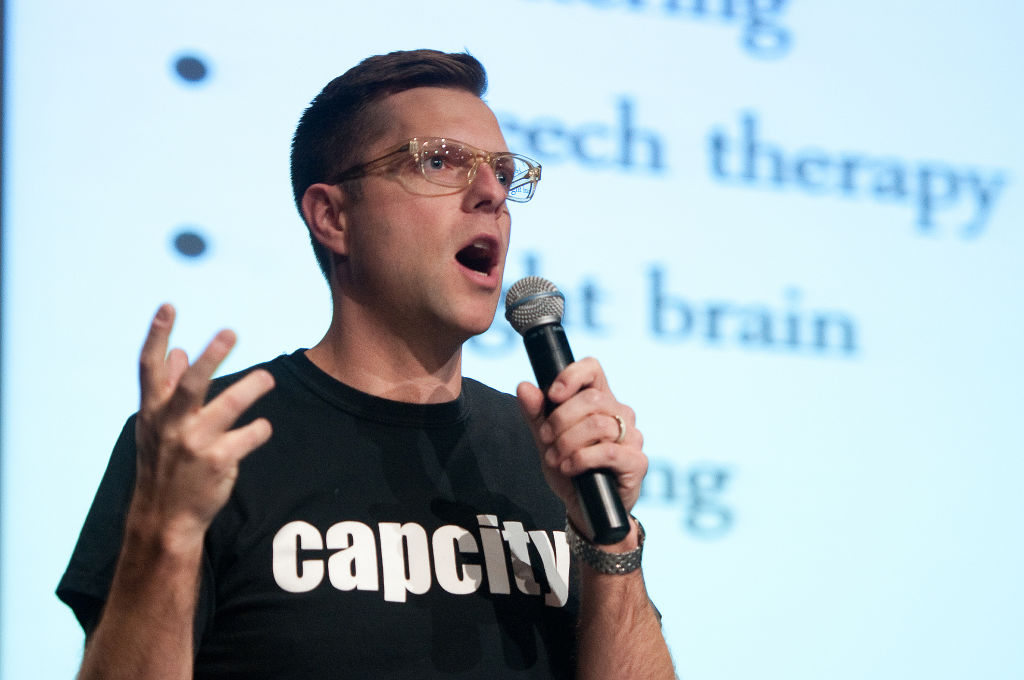 Peter Joynt has overcome a speech impediment to make his mark as an MC and motivational speaker in the Ottawa area.
Photo by: submitted

Peter Joynt has a knack for beating the odds.

Three years later, he had his number called in a 50-50 draw at an Ottawa Redblacks game, taking home $13,500 in winnings.

A couple of impressive victories over the odds, no doubt, but both pale in comparison to his accomplishments as an MC and public speaker despite his speech impediment.

“It’s been a hard road growing up,” says Joynt. “It gets in your head and you think about it every time you open your mouth, but now, at 36 years old, I am seen as a stuttering success story.”

Joynt’s flow when he raps – under the moniker “The Joynt” – shows zero sign of the stutter that is present in his speaking voice, something that makes the art form particularly freeing for him.

“There’s the natural rush from it, and it’s enriched by the whole stuttering thing,” says Joynt.

Unlike the car or the cash prize, Joynt’s achievements in music and in motivational speaking didn’t come about through a miraculous stroke of luck. They’re attributable to Joynt’s talent and his attitude of resilience and positivity that permeates all corners of his life.
“As cheesy as it sounds, I got my start in rap by being positive,” says Joynt. “I wrote a positive song about Ottawa, and it opened many doors for me.”

Joynt is referring to his song “Capcity” – an ode to Ottawa – which gained traction online and garnered a front-page appearance on the Ottawa Citizen as well as interest from the Ottawa Senators, Ottawa Tourism, Rogers TV and various festivals.

The Senators organization asked him to create a ‘Sens’ adaptation of the rap.  A diehard fan of the team, this was a dream come true for Joynt. He released a ‘Sens mix’ of Capcity in 2012 before releasing ‘Ready For More,’ another Ottawa Senators song, a year later.

Eventually, his relationship with the organization landed him center ice at the Canadian Tire Centre. He performed his newest Senators-themed track, ‘This Is It,’ in front of a crowd of 18,000 hockey fans last New Year’s Eve.

The ‘Go Sens Go’ refrain featured in the chorus of the song is a sound byte recorded in a gymnasium full of kids at one of Joynt’s many school visits.  Joynt and the Senators’ PA announcer, ‘Stuntman Stu,’ have been touring local schools as part of their #NoMoreBullies Tour.

Through his experiences, Joynt brings an authenticity to the topics of bullying and overcoming life’s obstacles.

“I’ve been teased a lot because of my stutter, “says Joynt.

“We’ve all got our own hurdles to get over in life. Those hurdles make us work a little harder, but it’s those hurdles that also make the successes that much more rewarding.”