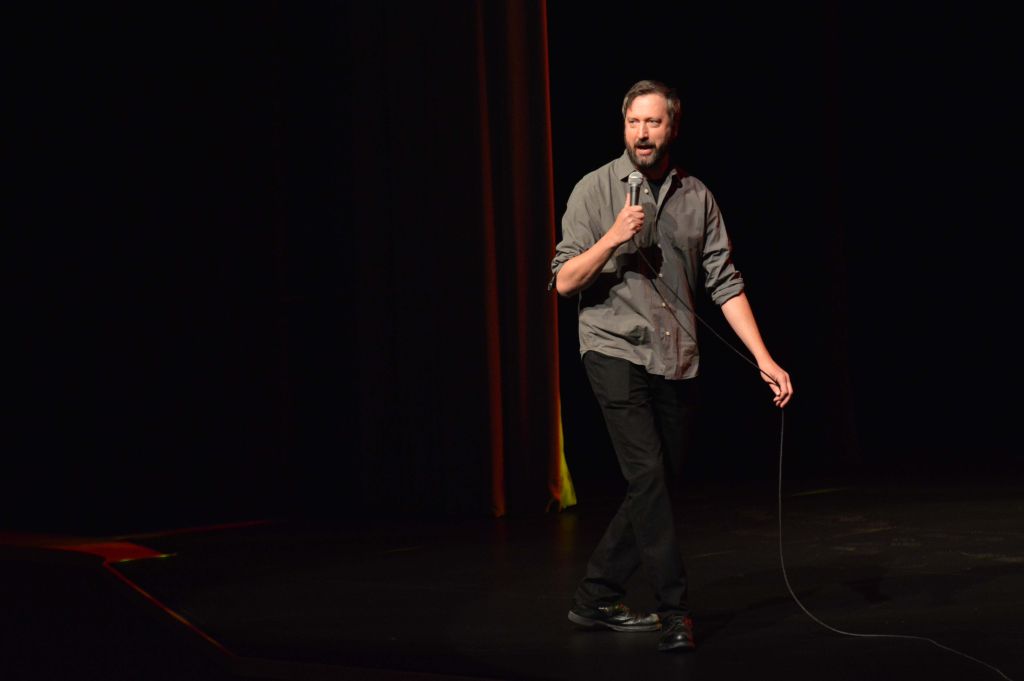 Tom Green performed stand up at the Algonquin Commons Theatre Jan. 30. He joked about Donald Trump, sex with koalas and how married people shouldn’t have Facebook.
Photo by: Molly Gatt

It’s crazy to think that a broadcasting graduate from Algonquin would go off to have the kind of career Tom Green has had.

Green has hosted Saturday Night Live, had a successful show on MTV, married Drew Barrymore and made Freddy Got Fingered, which is possibly the worst movie in cinematic history. His movie was nominated for eight Razzie Awards and won five, including worst on screen couple between him and the animals he abuses.

Green, 44, came back to Algonquin to perform stand up for a big crowd of local fans on Jan. 30.

Besides the upper floor, which was closed off, there was a butt in every seat.

His career has slowed down a bit, he says. He’s been doing a podcast and touring around the world doing stand up for last few years. His stand up he says has recently taken him all the way to Australia.

“When I was growing up in Beacon Hill, I never thought I’d be in Australia holding a koala,” says Green.

“The zookeeper hands me the koala, this is a professional guy, he hands me the koala and says, ‘You know, mate, the koala is the number one carrier of chlamydia,’” says Green, responding with, “You could have told me that before I f***ed it.”

Green’s act wasn’t all dirty jokes though. It seemed as though a lot of his material was meant to enlighten people on what’s going on around them. He brought up terrorism, Donald Trump and how married people shouldn’t have Facebook.

Green was serving his signature beer by Beau’s Brewery before the show. The beer is made with milk because he used to suck on cows utters for TV.

Some audience members had too much to drink and started yelling at him during the show about his divorce and his battle with testicular cancer, which he responded with, “I wouldn’t trade cancer for anything, except for my right testicle.”

Ian Scott, 18, who studies culinary management at Algonquin, was too young to drink but said he had a great time regardless.

“I haven’t seen much of his stand up, but I love everything else he’s done,” says Scott. “It was definitely better to see his stand up live. On a TV it would have looked like he was just yelling to himself.”