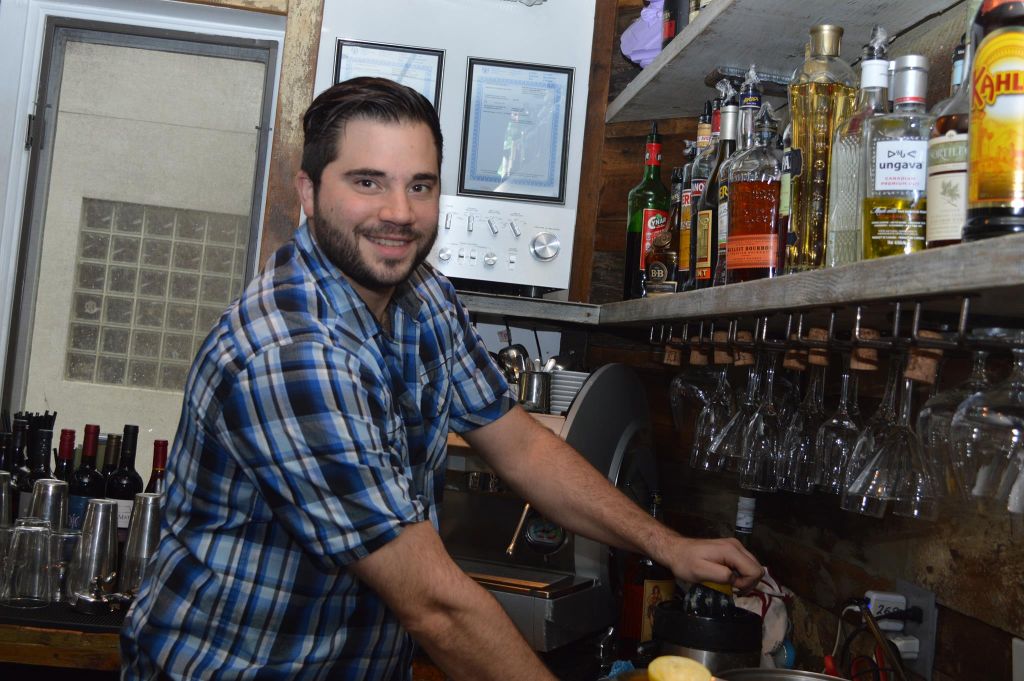 Cameron Lyman gets prepared for a busy night at a popular downtown restaurant. Lyman has been a server for several years in the capital
Photo by: Patrick Jodoin

The saying “the customer is always right” is a little outdated. People often use it as an excuse for bad behaviour—especially when it comes to restaurants.

Furthermore, in 2016, with the help of customer review sites like Yelp, everyone and their dog is now a food critic.

That’s fine, your opinion is valid. But small business owners are often lambasted online and livelihoods can be destroyed by people (who feel they’ve been mistreated at a restaurant) with an amplified opinion and a forum to get it out there. Sorry to break it to you, “MsFiddleheadLover75,” after those four glasses of chardonnay and the entitled attitude you brought in with you—there’s a likelihood you were the one who was in the wrong.

The internet has somewhat leveled the playing field. Some forward-thinking restauranteurs rightfully fire back at unnecessarily harsh online reviewers. As such, people are held accountable for their actions—on both sides of the coin.

The onus of responsibility for an enjoyable dining experience lies both on the restaurant and the patron.

And so, Glue reader, your demographic is in a unique position. As young people, you can alter the trajectory of how people dine in the years to come. You can correct the bad habits of your parents.

Here are a few guidelines in the form of ‘dos’ and ‘don’ts’ to help you do just that. The opinions expressed by the servers interviewed do not necessarily reflect those of their employers.

However, the 10 per cent your ol’ man taught you to tip is antiquated. Please, don’t tip 10 per cent. Considering inflation, changing times, and so on, 15 or 18 per cent would be a better base number to consider. “But I’m a broke student,” you say? Well, if you’re splurging for a special occasion or something, be sure to factor in the tip from the beginning of the night. It’s important, that’s how servers make their money. On their actual paycheque, they make less than minimum wage.

“For me the lowest someone should tip is 10 per cent,” says Cameron Lyman, a veteran server who has worked in some of Ottawa’s finest dining establishments. “That is if you get bad service where the problems you had were the server’s fault based on their incompetence or lack of caring. That’s the lowest I would ever tip someone and it would have to be very, very poor service. I think 15 per cent before tax is still an acceptable tip and any anything above is really a bonus.”

“Fifteen per cent is fine,” says Patrick Murray, who has been serving for several years and loves the job and his patrons. “A tip is a suggestion. All these articles about tipping are a ‘tempest in a teapot.’” (The author assured Murray that this article would not be one of “those.”)

This is huge. “Campers” are diners who stay at their table long after they’ve finished eating and drinking. They camp out, essentially. They’ll ask for another glass of water, they may be insulted if they’re brought their bill unrequested—or they’ll simply never ask for their bill, creating an inflated awkwardness for their hardworking server. Sometimes they’re surprised that a bill arrives, ‘O, the absurdity of having to pay for my meal!’ “Flipping” tables is how servers and restaurants make their money. To camp out is very inconsiderate to other diners, too. They may be politely (or anxiously) waiting by the door (or at the bar) while you finish up pontificating about the day’s events to your drowsy companion.

“When it isn’t busy, this is no problem for me, but on a night when we have a lineup or on brunches especially it means I can’t flip the table,” says Charlotte Healey, who has been a server for the past 10 years. “At brunches, I used to bring over the beer list and ask if they were ready to get ‘day-drunk.’ There’s no nice way, as a server, to say ‘move it!’ So we kind of rely on gentle hints, which generally get ignored.”

This is crucial information which the person preparing your food might want to be aware of. Don’t be shy, let it be known.

A good, professional chef is there to feed people, and they would be happy to accommodate. Sometimes they’re excited by the challenge of rustling up some ingredients to make a delicious vegan dish, for example.

“If you can’t deal with people’s dietary restrictions as a restaurant gracefully then don’t,” says Chef Simon Bell. “It’s not that hard to accommodate if you know what you’re doing.”

There is a caveat, however, with regard to egregious modifications to dishes: “At most places, real care and planning went into a dish,” says Murray. “Unless it’s serious, chill a little on modifying what you order.”

On a busy Saturday night, a restaurant has a seating plan. Guaranteed. With several reservations coming in at different times, some with different special requests, these seating plans are a fine science. Please don’t mess that up by causing a stir when your table isn’t where your whims would like it to be. Do not just grab the tables and start rearranging the dining room.

“I know your table might not be the one you want, but we’ve set up a seating plan,” says Murray. “I know, I look like a dick not giving you the same size table elsewhere, but it’s usually for a good reason.”

The biggest complaint among service staff is being treated poorly. These aren’t feudal times, they’re called “servers,” not “serfs.” Some of those who were interviewed expressed several manifestations of rude behaviour—the (completely uncalled for) touching of tattoos; interrupting servers while they’re with other guests; finger snapping and whistling; not acknowledging your server when they greet you; interrupting them while they dictate the specials, etc. These could all be rules of their own, but it’s better we just ask that you be kind.

“Saying ‘please’ and ‘thank you’—some people are good at ‘thank you,’ but most people forget ‘please’ altogether,” says Healey. “It doesn’t seem like much but the absence of basic politeness adds up by the end of the night and generally makes it harder to be polite back.”

“Negativity is contagious,” says Lyman. “Treat others how you’d like to be treated.”

It ain’t easy splitting cheques five ways and standing there with the Visa machine while each person takes their turn—with a buzz on and their focus oftentimes elsewhere—but servers do it with a smile on their face. In Toronto, some restaurants unequivocally do not split cheques. Some only accept cash.

Ottawa diners have it made. There’s a wealth of excellent restaurants in Ottawa. Go out and explore them, just be sure to keep a positive attitude when you do.

“Don’t get me wrong,” adds Healey. “Most of the time people are nice and polite and tip well. I have a tonne of regulars that are amazing and make my job easy. So I try not to let a few rotten apples ruin the bunch and I think all servers would agree with me on that one.”

If you have some rules of your own, be sure to comment below!