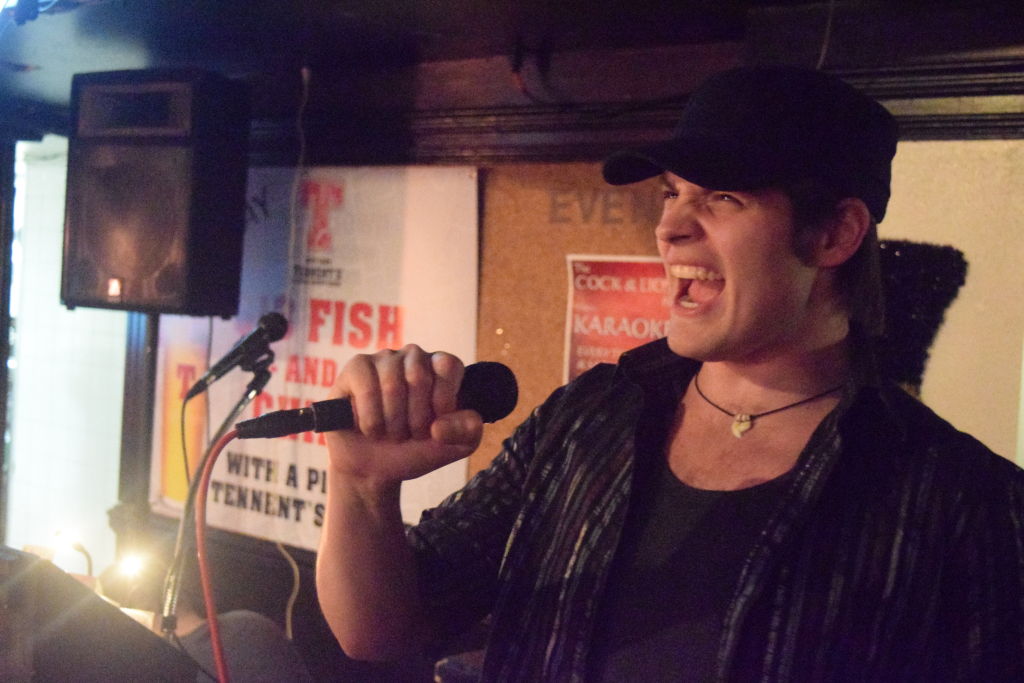 The first time I stepped onto stage to do karaoke, I sang Bootylicious by Destiny’s Child. I never knew a three-minute song could last so long.

I was nervous and I stumbled multiple times throughout the song. I felt like I mumbled the entire time. But the crowd cheered.

Even though the majority of the people cheering in the crowd were drunk, it was still a good feeling.

I didn’t need to be good at singing, I just had to have fun with it. It became a great experience for me, as I now go do karaoke once a week, on Thursday nights.

Karaoke was never an interest I had. It has just sort of become a thing for me after going there multiple times with my friends and classmates.

But to me, the vibe you get at karaoke is the biggest draw. Others feel the same.

“(The pub) kind of has this hanging out in your friend’s basement kind of vibe,” says karaoke DJ Richie Lefebvre. “It’s welcoming and the staff and customers help make it feel this way. I love the people and being able to help facilitate people having a goodnight. It only feels like work once in a while.”

Lefebvre spent a couple years doing karaoke before realizing that he wanted to get into it as a job.

“It’s kind of a side career for me right now, but I just enjoyed it so much. (It was) really a confidence booster for me,” he says. “I used to be shy, and I can still be, but (karaoke) really brought me out of my shell.”

People who work at the bar I like to go to often refer to me as Bootylicious.

I recognize all the people that work there and all the regulars that go, and the songs they like to sing. And they know me.

One time I was walking up the stairs so I could meet a friend outside and the owner of the bar said, “Woah, hold up there, Bootylicious.”

“(I do karaoke) because it’s a very liberating experience,” says Algonquin business administration alumni Harley Crespi. “You go up and sing without being judged. Nobody cares about your skill. Everyone’s just there to have fun.”

I think everyone has their own reason for going to karaoke.

Whether they got dragged out by the friends or are there just to kill time and hang out.

“(I like it) because it’s a good place to socialize and meet new people,” says fundraising manager Eric Cherpit.

Cherpit, a regular at the Cock and Lion Pub, says the vibe the bar gives is a mix of everything.

“It’s loud and energetic, but not loud enough that you can’t talk with your friends,” he says. “It’s really chill and relaxed, but sometimes it can get wild.”

For me, I use it as a way to blow off steam. I use it as a distraction to forget that I have assignments due and tests to study for.

I do it to socialize with people and make friends. I use it as a way to strike conversations up with complete strangers.

I use it as a way to build character.

I do it because I love karaoke.