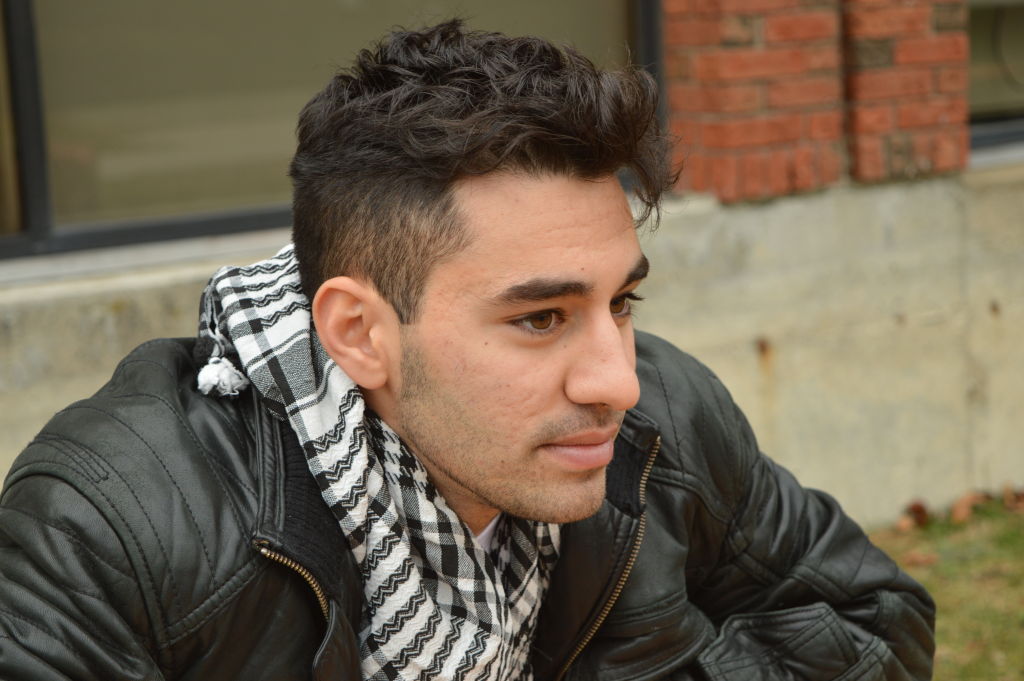 My father didn’t have a passport when he first landed in Canada. He lived his whole life in a war-torn and judgemental Middle-East, where every “different” race was discriminated against. Coming from a marginalized Palestinian family, he had to struggle his whole life against racism and coping with the fact that his parents were pushed out of their home and into a new country that didn’t necessarily want to accommodate them. This is why he understood the importance of the ground he was now walking on. He knew it wouldn’t be easy- he came with a university degree, no money and some luggage. His degree didn’t transfer and money didn’t last, but he found a temporary place to live and work. Life was tough and he didn’t have any time to relax. He missed home, his family and the comfort that comes with knowing there is peace in his life. He ended up moving all over Canada and the U.S for several years before landing a stable job in Los Angeles, where he finally received something no one can ever take away from him: a passport.

I only learned to appreciate his story when I had to go through a humbling scenario myself.

I shared a bedroom with my mother and my sister at my grandparent’s apartment in Montreal when we first moved to Canada a little more than 10 years ago. They slept in one bed, and I took the other. I think back to the first few weeks where I would stand from the small, iron ledge we called a balcony and watch people on the street strut back and forth all day, just so I could see how Canadians walk. Everything was so intriguing; from the way they would speak to the way they would dress. I spent my first few weeks in Canada on that balcony, but I would never climb down to go outside. I figured the people on the street knew I was watching them, but they never said a word. I remember how cramped everything was, how hot life we were a small apartment, how new my world suddenly became and how disoriented I became in it.

Although I didn’t understand it much back then, I am able to look back now and see just how much I would have had to go through to get used to my new home, and I wasn’t alone. In fact, according to the United Nations Refugee Agency (UNHCR), there are more than 50 million refugees around the world right now, half of which are women and children.

I was born and raised in Los Angeles. My parents originally moved to Canada from the Palestine and Egypt to escape cultural and religious persecution before finally settling in the South-West. And while they had already been exposed to the Canadian culture and climate for some time, teaching their children about it was a different story.

“There is a bi-cultural identity,” Jesse Ranauta explained to me. Ranauta is the full-time youth program coordinator at Ottawa Community Immigrant Services Organization (OCISO) and is a first-generation Canadian himself. Being part of an organization that helps nearly 10,000 immigrants settle and organize their life per year is a blessing to Ranauta.

Having a career of helping teenagers who remind him of himself, Ranauta developed an interesting perspective. “I can’t say I’m Indian because I don’t have an Indian nationality since I wasn’t born there.” Ranauta said. “I can’t confidently say I’m Canadian either because of the challenges I have to go through. That’s coming from someone who’s coming from a privileged situation of being born in Canada, so you can imagine how newcomers feel.”

And through OCISO, refugees are taking advantage of new programs being offered exclusively for them. One of these is the Private Sponsorship of Refugees program, where the Canadian government announced that it has temporarily exempt Syrians from the requirement to provide proof of refugee status in order to be sponsored.

With this in mind, it’s still hard to imagine how some of these newcomers can make it in Canada on their own.

Then I met Arianna Chiriboga, a 21-year-old psychology student from Ecuador. Chiriboga decided that the University of Ottawa will be her principle focus as she adjusts from life in South America. “I thought of Canada as a cold place and that’s it,” Chiriboga said in between laughter. “In the end I chose to come to Canada because I wanted to practice my English and because of the good education”

Chiriboga is part of a community of young immigrants who chose Canada because of the benefits of its education system. But for some migrants, their choices were based on something much grimmer.

“When I was a toddler, my family moved from Afghanistan because of the war,” 22-year old Carleton student Tariq Popal said to me. “We moved to Iraq, which up to this point have consisted of some of my best memories. But then another war had begun and we were forced to evacuate to Jordan.”

Popal explained that since his father worked with the U.N. he had to stay behind, but his mother decided that it was time to live in a peaceful country like Canada.

“What made the decision so much easier was that my mother had most of her brothers, sisters and her mother already living in Canada,” Popal continued.

Ranauta, Chiriboga, Popal and I all have different stories on how things came to be, but in the end we all made it to Canada. However, we aren’t the only ones with stories. In 2013 alone, an estimated 258,953 new immigrants were going through the same process of learning to call Canada home. And in 2015, 4,289,792 Syrian refugees are actively looking for a new place to settle.

Contrary to popular belief, coming to a new country is tougher than it looks. Especially if you’re an impressionable teenager. You have to adjust to social cues, make new friends and maybe even learn a whole new language, all while trying not to stick out.

“To begin with, we arrived to Canada in October, where temperatures are completely different than in Iraq,” Popal said. “I remember when I first got here and new friends would ask what my favorite sport is. I’d say football and they would laugh because I didn’t know what their American football was.”

Chiriboga wasn’t far from feeling like an outsider either.

“It was much harder at first, because my English wasn’t very fluent,” she said. “Sometimes they showed no interest in getting to know me or my country. It’s hard to think that they truly accepted me into their country.”

But at least Canada, specifically Ottawa, has showed that it’s listening to the needs of those who need it most.

Most notably, Prime Minister Justin Trudeau had announced that his government will bring in 25,000 refugees by the end of 2015. And while it may seem like a longshot, this influence could have motivated other prominent figures in the city.

For example, Algonquin College had decided to join the humanitarian effort by fully funding the tuition of up to 10 refugees. The fund that the college has announced takes the form of a $50,000 commitment to support refugees who apply and are accepted into the college.

The University of Ottawa responded to the Syrian refugee crisis by contributing $200,000 to fund for their iniatives of a minimum of five new scholarships for refugee students, a postsecondary certificate program to be offered in Lebanon to Syrian refugees and a Faculty of Law Refugee Sponsorship Program which will help Canadians with the legal and procedural challenges involved in sponsoring refugees. They are seeking to have their support matched by other donors.

That’s why communication becomes key in settlement and acceptance, Ranauta explains when hearing all these stories.

“A lot of things that the general public in Canada doesn’t see is the everyday challenges that immigrants have to go through because of their status,” Ranauta said. “That’s a side that people who might have lived their whole lives here might not consider. There’s a lot of privilege that comes with status or citizenship in Canada.”

One way to achieve social integration is through the community, Ranauta believes, and newcoming teenagers can do this through several programs with OCISO. In particular, the leadership program strikes Ranauta as uniquely interesting.

“In this program, they’ll do activities that are about challenges or identity and we come up with ideas on how to help people who are in the same situation,” Ranauta said. “Once you allow them that space, they come up with such wonderful ideas.”

One of these groups, he says, wanted to create a mentorship program for other new immigrants and refugees coming into their school, to help avoid being bullied and to build a relationship with the student council.

“Feeling included and accepted is important,” Ranauta said. “You can’t re-settle in a new place until you feel like you can communicate with people and that you feel your voice is heard and that you are acknowledged.”

Thinking back on my days on the balcony, I can’t help but agree with Ranauta. There were times where I wanted to reach out and talk to people in the new country I was in, but I didn’t want them to know I was that different from them. I’m sure I shared these same feelings with my father when he first landed, which makes our bond tighter. Maybe after all this time he still feels the same way?

In that aspect, the balcony will always hold a place in my heart. When the people I was so intently watching looked up and spoke to me, my barrier was broken. They helped me climb down from my wall and join them in the world. Even if I couldn’t truly walk like a Canadian.