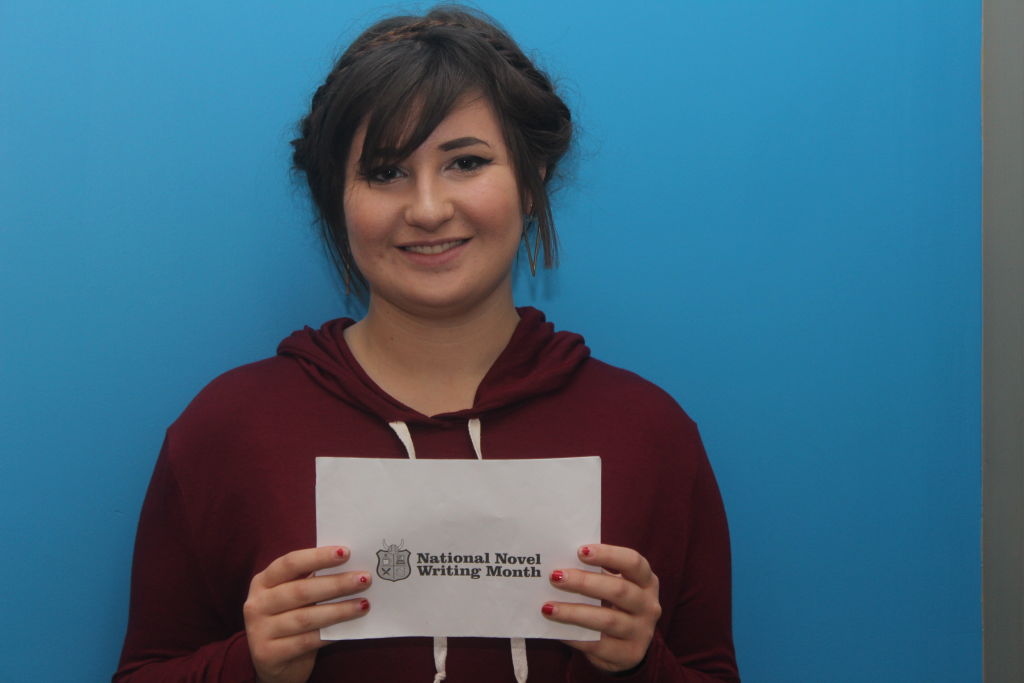 Mike Holuj sits on an OC Transpo bus from Carleton University going towards Kanata. Instead of looking out a window and being bored, he opens his laptop to a Word document.

Before he can write, Holuj needs to take out his headphones and listen to something familiar – something that helps him concentrate. He chooses a track from his favourite album, Radiohead’s In Rainbows. He immediately focuses. The world becomes what he is doing right now. He begins to write, punching out as many words as he can on his hour-long bus ride.

Holuj, 22, is participating in NaNoWriMo. The more common name for that strange term is National Novel Writing Month. It is an annual event that occurs in November all over the world, a 30-day creative writing challenge where writers attempt to write 50,000 words in 30 days.

Holuj is writing a novel called Catching the Sun. Partly based on his first two years in university. It centers on a relationship he shared with a girl over two years that led him on a road of self-discovery, learning a lot about himself in the process.

“It led me to learn that I have more control over my feelings,” said Holuj. “It also helped me figure out what passions I have in life. It helped open up a lot more to my own potential.”

Holuj experienced constant fighting and depression over the course of the relationship, where the stress of it was amplified by other aspects of his life. Many of Holuj’s friends were not a fan of his girlfriend and he realized that he was not happy being with her. The novel is based on his own experiences but follows a character called Allen, in a relationship with a woman named Jen.

The same sort of experiences will happen for Allen in the novel. Largely his friends and family were getting upset with him because they could see how unhappy the relationship was making him. In the novel, the main protagonist’s friends don’t really hang around him that much because the can notice that the girl is not good for his well-being. The characters would say things like ‘You’re not having fun’ and ‘I haven’t seen you smile in weeks.’

“That sort of culminated in me realizing, ‘this is bad,’” said Holuj. “It hit a peak when I started seeing the school counselor. I would have bursts of emotion at random points in the day. It was really tough to go on living with this constant stress and anxious pressure in my head.”

The novel included a bevy of silly relationship fights, but the most prominent was one near the end of September where the two main characters were fighting about where to get something to eat. The girlfriend specifically wanted a club sandwich but Allen had no idea where to get one. This was a fight that made the main character go home depressed. Holuj explained that in his novel, he would display emotions with physical characteristics.

“Instead of saying he came home feeling depressed,” said Holuj, “I would say he came home and noticed all the colours around him were less vivid, less vibrant. The colours were fading to black and white and there was a low noise going on in his head and his thoughts echoed and bounced around.”

His novel is also something much bigger than just a relationship-gone-awry kind-of story.
“It ends up being about the main character’s self-actualization,” said Holuj. “I read a lot of books that there was no crazy save the world plot. It was just characters overcoming their own personal battles and I really liked that.”
Holuj chose to write his book during November because it is a structured time.

“It’s like I’m not alone writing this book,” said Holuj. “Everyone else is writing a book at this point so there’s a lot of support in the community for it, even indirect support.”

This is actually his second stab at NaNoWriMo. He had heard of it in November of 2014 and he simply sat at his computer and began to write. The result of his first year was not pristine, he did not continue after four thousand words, he didn’t like the direction his novel was taking and because of dull characters.

Laura Klein, an 18-year-old first-year student in Carleton’s linguistics program, understands all too well that while you can have a plan for the month, the novel can take unexpected directions.

“Some things don’t follow your plan,” said Klein. “It’s really spontaneous and you might get to a scene and you can’t write it because you have writer’s block. You can’t let that stop you. You have to write what you can.”

Klein has been involved with National Novel Writing Month since she was 12-years-old, since 2009. In her first year she had written 15,000 words and it grew and grew until she had started writing 50,000 words in her fourth year. She has won every year since, and to win the writing challenge, you simply have to write 50,000 words. Klein is currently at 10, 410 words in a romantic tale she is writing called How to Win the War. This year she is aiming for 60,000 words.

John Welsh, a first-year library and information technician student at Algonquin, is writing a novel, 10 Songs About You, inspired by his Grade 12 experiences. It will be centered around music and how it helps the characters in the novel, whose names are American states, get through the stressful times of life and school. There will be 10 chapters in the novel and each will feature a song about the main character York’s feelings and a song he wants to sing to another main character, Carolina.

“There’s a romance aspect to it but it’s more-so about friendship and banding together during the stressful times,” said Welsh. “It’s a take on high school musical type shows, plus John Green books. Throw in a bit of Nicholas Sparks and you’ve got mine.”
Welsh enjoys writing for the joy it brings him.

“It was something as part of my escape when I was trying to get out of the slump that was my own life,” said Welsh. “(It was) creating alternate worlds that were different than my own, more exciting. Something that I actually felt like enjoying and want to be a part of. If no one else was going to make it, I guess I had to.”