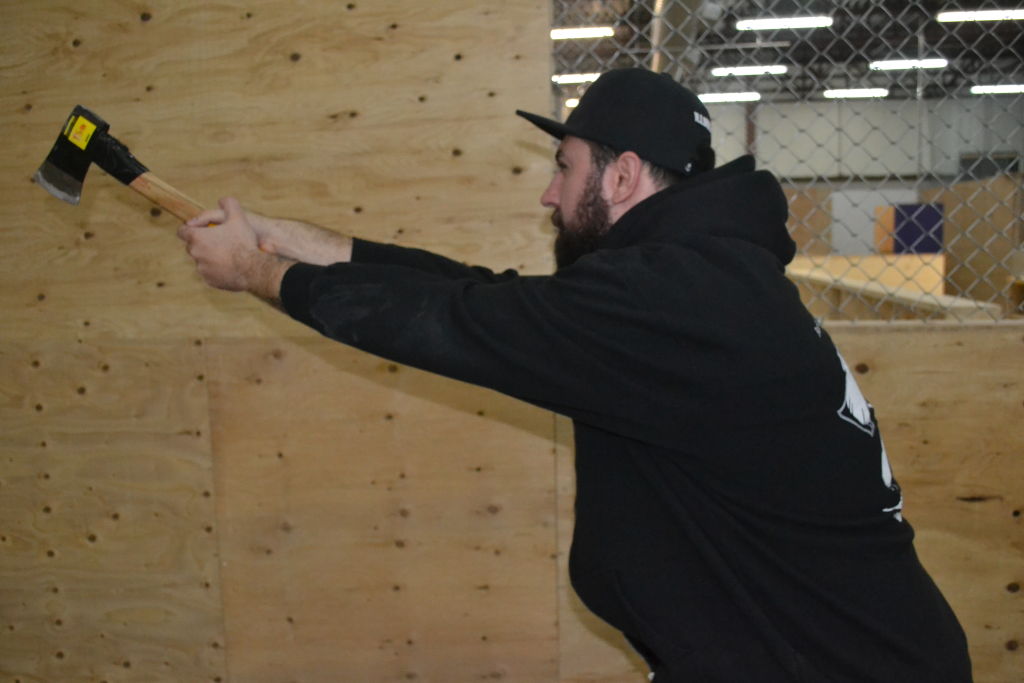 The room feels like a combination of a carpentry shop, bowling alley and pool hall. Men and women plant their feet, cock their arms and take aim at painted bulls-eyes.

Their axes slam into the targets in a cacophony of metal thudding on wood.

The Backyard Axe Throwing League (BATL) has arrived in the Capital city, establishing a facility boasting 22 “alleys”, where participants throw small axes in head-to-head competition. The League was established in Toronto in 2006 and currently has eight locations after opening the Ottawa branch.

“You can pick it up really quick,” says BATL employee Clinton Butler “Just get in there, throw axes and have a great time.”

Butler found out about the facility by complete chance, and with his background as a knife throwing instructor, he knew he had to get involved.

General Manager of the facility, Matt Wito says the competitive league won’t start up until January, but he is currently taking bookings for parties and corporate events.

An employee sprays down a target with squirts of water and Wito explains that keeping the wood damp reduces the amount of splintering and lengthens the life of the targets.

“Yeah, my biggest expense is lumber,” he laughs, gesturing to the freshly constructed wooden lanes.

“Oh, and insurance too,” he quickly adds.

Throwing sharp, weighty objects around might seem like an uninsurable venture, especially after Wito mentions that groups will be allowed to bring their own alcohol. That is, until you see the lengths taken to ensure patron’s safety.

Participants must be over 18 and the lanes are divided by chain link fencing that extends to the ceiling. BATL staff are stationed at every other lane to keep eye on throwers and offer advice.

“I haven’t encountered any bad people,” says construction worker Brad ‘Jolly’ Rogers, who has competed at BATL’s facility in Pickering. “It’s super safe, nobody gets too out of control.”

Booze is limited to plastic containers or cans (wine bottles are allowed), and consumption is monitored closely by staff. Wito compares the atmosphere to a pool hall or playing darts, with groups enjoying a couple of drinks between rounds.

Former Algonquin advertising student Emily Major-Girard has been working at BATL for about five weeks after she answered a Kijiji ad for a coach and event manager.

“I had heard rumours that it was coming to Ottawa,” she says, explaining she first witnessed the activity on the TV show Hockey Wives. She is excited to be involved with the venture.

“It’s pretty cool,” she says. “I’ve always been involved with sports but this is a bit different.”