Anne-Marie Roy’s face tightened, her brow narrowed and her back arched – the public cross-examination of the University of Ottawa’s student federation president had begun.

“There will be those on the other side of this who say you’re just being hypersensitive,” said Sun News Network anchor Alex Pierson in an interview aired March 3, 2014. “…You know, lighten up, this is just the way guys talk.”

It took a moment for her to process her question.

Over a month prior, Roy had become the focus of a nationwide debate about rape culture. It all happened after a sexually aggressive Facebook group chat about her was posted online.

But back in the Ottawa Sun newsroom studio, slouched in a small armchair, she began to realize, and not for the first time, that she was scared. Sick and tired of the scrutiny, legal threats, and rehashing, Roy was just an average woman who had been placed under extraordinary pressure.

The 24-year-old’s voice was shaking now, speeding up as it struggled to keep pace with her mind’s racing thoughts. Her media training was limited to debating tuition fees. Not this.

This is just the way guys talk, she’d asked. When she heard it, Roy couldn’t let it go.  Even today, it still rings in her ears.

“That is rape culture actually,” she snapped back quickly. “Allowing this to happen as locker room talk, saying that I’m being too dramatic about this.” Each word grew sharper than the next.

“This is the kind of talk that needs to be challenged.”

In declaring so, nothing would ever be the same for the president again.

It all began on a Monday.

With the ground frozen and covered with snow, Anne-Marie clicked open an anonymous email that had arrived in her inbox.

Buoyed by a recent win as president of the Student Federation of the University of Ottawa (SFUO), she was enjoying the beginning of her second-term.

She was once again the public face of an organization representing over 35,000 undergraduate students; a young woman officially on her way.

Her life and career up until this point had been fairly normal.

But when she pressed down unto the mouse that day, there was no turning back.

The email contained four screenshots of a Facebook chat that had taken place earlier in February. The participants were two student federation board members and other student politicians.

Roy was the subject of the conversation. 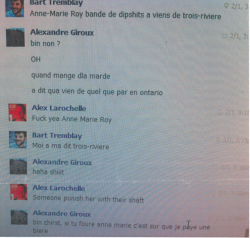 “…will suck me off in her office chair and after I will fuck her in the ass on Pat’s desk,” said one of the phrases written in French.

“Someone punish her with their shaft,” said the other, written in English.

What the five men had said about her in the thread was so sexually violent, graphically demeaning and threatening that it was a direct attack on Roy’s bodily integrity, her self-determination and expression.

“We have this illusion that everything is fine,” she says in her office, located at the centre of the University of Ottawa’s downtown campus. She begins raking her right hand up and down her neck, as she recalls the “disgusting” conversation. Her voice slows, and the words she chooses to say become more purposely drawn out. “I feel like this is why I like to say rape culture is something we’ve become desensitized to.

“It was hurtful to see these guys talk about me in such a disrespectful type of way.” Her neck now red and shoulders hunched, she continues, “to put it in writing, that was enough.”

Roy acted quickly with the email’s contents. She presented the men’s comments to members of the federation’s Board of Administration (BOA) at its meeting on Feb. 23. Outrage across campus ensued. Four of the men threatened to sue her for discussing the issue in public. They would eventually back off.

Five days later, the screenshots were made public on the blog bellejar.ca, included in an article that revealed both the names and profile pictures of the perpetrators. This move by Anne Thériault, the blogger behind the posting, earned her site 30,000 hits in just one day. Roy’s story was gaining ground, and quickly.

“I probably would have crumbled in five seconds if that was me at her age,” Thériault says in an interview from her Toronto home. “Anne-Marie handled herself amazingly… especially knowing that she was going to have vile things hurdled at her for standing up to the status-quo.”

Then, the media calls began ringing in.

To start off, Roy was given a triple dose: CBC, CTV, and Radio-Canada. All three back-to-back.

“When [the media] first came into my office and set up their lights, I started thinking to myself, ‘oh shit’, who else is going to call?” she says. “What I thought would be a five minute interview turned into an hour-and-a-half, and I quickly learned this circumstance would be out of the ordinary.”

Pushing her anxiety to the back of her mind, Roy emerged from interviews as a calm and composed leader.

“She was incredibly determined,” says SFUO executive assistant Amy Hammet. “Even when she was doing literally dozens of interviews a day at the height of it from 5:30 in the morning to 10 at night, her message was just as genuine every time.”

But despite the spotlight, Roy could not help to stop but think of someone else.

“I reflected a lot about Loretta Saunders at that time,” she says, referring to the 26-year-old Inuit university student who was found murdered in Halifax on Feb. 26. Some few days before Roy was set to receive what felt like all of the media’s attention in Canada.

“I remember telling myself: I’m not missing, I’m not dead,” Roy says. “So I learned about the problematic perspectives about media, violence against women, and forged my politics around feminism.”

Roy was nervous, but responded to it differently. Her parents had invested great ambition in their oldest child.

“My mother and I taught my children to make a difference and be apart of society,” says Cristine Côté, Roy’s mother. “You cannot sit behind and let other people do everything.”

Yet, Roy’s privileged life had provided her with very few chances to show herself worthy of such high expectations.

“I’ve had it pretty easy,” Roy admits. Up until this point, the biggest step she could recall was moving from Welland, Ont. to Ottawa in first year to study.

Or that time when an international student ran into the SFUO office crying for financial help. But Roy couldn’t relate because she is one of the fortunate few to receive support from their parents; they help pay for her tuition.

“She kind of gets scared of overstepping her place in society,” says Nicole Desnoyers, vice-president of services and communications at the SFUO and one of Roy’s best friends. “Even though she is very aware of all the privileges she holds.”

Nevertheless, the entire experience has not only made Roy more self-aware but more motivated to end rape culture.

From holding speeches educating others on the topic to organizing masculinity workshops, she’s created new student policies and practices to challenge the structure instead of perpetuate it.

“She stands by what she believes in,” says her sister Catherine. A fierce, hostile determination. “And nothing gets in her way.”

A year later, Roy sits cross-legged on a brown couch in her office, just a few feet across from the same office chair graphically described in the sexual scenarios online.

Acknowledging the February incident as an event that has changed her life, she measures its impact both in terms of her personal and professional growth.

“It was more than just a speck,” she says, refusing to forget what cannot go away. “It’ll be something I’ll forever look back on.”

She admits some things in her life have changed. In this new world, one in the post-drama of February, she’s now pointed out as “the girl who talked about rape culture” when travelling to other post-secondary schools.

But overall, most things haven’t. She still hates wearing socks. Her personal relationships have stayed the same, strong as always. She’ll have completed her degree in December 2014.

Without a steady plan for what to do next, she’ll have walked across the convocation stage, honours bachelor of arts in communications degree in hand, shaking hands with university dignitaries, smiling in pictures with classmates and friends.

Her future left now as unclear as everyone else’s in the room.