It’s Friday night and the Babylon Nightclub on Bank Street is packed. Lovers of all musical genres are here with their friends at the “Frenzy” club night to bounce, vibe, jump and jam to the massive beats that will blast from the speakers. Most of the millennial subcultures are represented – hipster, mod, skater, bro, punk, and hip-hop head. These people came to see Salva, an American club DJ, producer and engineer, and one of the biggest new names on the electronic music scene. The excitement cannot be contained. The crowd is warmed up by the openers: local DJs and promoters Foster and Iggy Smalls, and Toronto-based rapper Sean Leon. Salva comes on and the crowd lets out a deafening cheer. The people put their hands up as the music builds to a climax and then, when the beat drops, it seems as if the walls almost blow off from the colossal bass and gigantic sound.

Whether you call it EDM trap, trapstep, or simply trap, this new musical form emerged within the last few years in the U.S. and has taken over party floors across North America thanks to innovative DJs such as Flosstradamus, Diplo and Baauer. Even pop-artists like Iggy Azalea and Katy Perry have cashed in on this new musical trend. The sound merges the party-bounce of southern hip-hop with the deep bass-heavy drums of dubstep and darkstep, but adds more melody and light vibes to make it accessible to a wider audience. Ottawa born group, Thugli, were one of the first DJ groups to incorporate original EDM trap production into their sets and are successfully touring across North America. Their music was recently featured in a commercial for the NBA 2K15 video game and their remixes are regularly played on BBC Radio 1’s “Diplo and Friends” program. They also have a music video in rotation on Much Music.

Ottawa has a handful of musical artists who experiment with trap music. Four of these artists give their unique take on trap and why you should listen to it right now.

“Trap came out of people wanting to merge electronic music with the southern hip-hop styles of the 1990s and 2000s. It has a great energy where you can mix bass-heavy hip-hop with dubstep but not have the violent or dark lyricism which might be in certain hip-hop songs. You hear a lot of songs on the radio these days with a trap breakdown so it’s become a very commercial style of music.”

“The more EDM sounding ‘trap’ refers to a more club-focused version of the southern trap sound that has been around for quite a while. What separates it from other genres is that this newer version of the old sound takes that southern rap vibe and makes it more accessible to a more aggressive dance floor crowd. The sound has become extremely popular and can be heard throughout Ottawa’s venues, whether they be big clubs or small bars.”

Sacha Foster (student, promoter and DJ) and Danya D (student and DJ in Ottawa and Montreal)

Foster: “With trap music it’s not as much electronic. It’s based more on the rhythm and people can recognize that a little easier. You still find synths and stuff in a lot of trap but if it’s a remix of a type of song then people will be more attracted to it.”

Danya D: “It has changed so much since the beginning, just like so many other styles of music. It began very slow and very simple, bassy, and has now grown to something more complex. Now it’s kind of evolved to a bit of house and electrohouse.”

On the weekend, when all you want to do is hit the club with your friends and get ridiculous on the dance floor, the deep booms and melodic synths of trap provide an undeniably addictive rhythm. 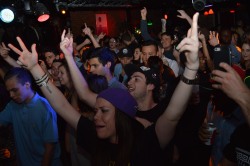