Even at 20-years-old, I couldn’t quite grasp the idea that my mom really wasn’t immortal as I watched her take her final breath.

How do you say goodbye forever to someone who gave you so much? What will my future be without her in it?

Superheroes aren’t supposed to die. As kids, we see our parents as our own superheroes, never thinking we will have to go a day without them. For my whole life, when I thought about the future, I never thought that my parents wouldn’t be there. I think we grow up with an abstract perception of death.  We’re naïve in thinking it will never take away the people that gave us life because after all, superheroes don’t die.

Going shopping, drinking wine, cooking dinner and watching T.V. with my head on her lap as she scratched my back are all just distant memories now.  She was the mom that welcomed my friends as if they were her own, threw surprise birthday parties and always thought to buy us something while she was out—no matter how small, to come home to.  At times she was more like a sister.

These moments slowly turned into her buying our gifts online, being hopped-up on pain pills, eating dinner in bed, and someone rubbing Voltaren on her back for a few minutes of relief.

In the spring of 2011, my mom received a phone call from our family doctor telling her to go the hospital right away.  She had a chest x-ray earlier that week, and a mass was spotted on her left lung.  My family soon got the news that would change the rest of our lives.  My mother had lung cancer.

Over the next three years, my mom fought an admirable battle.  Through cancer treatments and many bumps in the road, she stayed positive for her three daughters and husband. I spent most of those years away at school but never went a day without talking to her.  Even while she was fighting for her life, she coached me through cooking my dinner and answered my drunken phone calls at 3 a.m.

On top of worrying about school, friends and relationships, I worried endlessly about my mother and her deteriorating health.  I called her after every appointment in hopes of getting some good news.  I would have done anything to take her pain away. In the last year of her life she was on so many drugs for pain, nausea and everything in between, she would forget our conversations and become too tired to even hold one at times.

In March last year, I finally decided to pack up and take the eight-hour trek back home to Windsor.  My performance and overall presence in school and in life was waning.

Three weeks after leaving college, the evil villain named cancer defeated my best friend and my hero.  Those three weeks were the fastest deteriorating weeks of her sickness. Everything happened so fast, all I know now is that she’s gone and she’s not coming back.

At first I lived in shock and denial after the funeral. I had it in my head that this was temporary and that she would be back. I remember telling myself over and over “your mom is dead,” but I still couldn’t believe it.  I often forced myself awake at night.  I’d eventually catch a few hours of sleep when the sun came up around 5 a.m.  I was afraid to shut my eyes. When I dreamt, I dreamt of her, but when I woke up she wasn’t there.

Ottawa psychologist, Dr. Sandy Ages reassures me my feelings are not unreasonable. “Sadness, disbelief, denial, anger, confusion, anxiety, shock, depression. These are all feelings that are very, very, normal,” she says.

Each month following her death has been associated with a celebration she wasn’t there for.  First was Mother’s Day, in June her birthday and in July my sister’s birthday.  The list has gone on.

My first trip of the school year back home was Thanksgiving.  It lacked all of the things that were regular most noticeably her cooking.  During the last few years, my trips home consisted of flipping between Food Network and the news channels, late night snacking, and making sure she took her pills at the right time. This time she wasn’t there.

Even after eight months, it’s incredible how alone you can feel even when surrounded by people all the time.  A cliché that people often use to comfort those who have lost someone is to tell them that their loved one is always in their heart.  But that’s not good enough. When I wake up in the morning, my heart breaks all over again as I look to pictures of her on my wall and realize once again that she is gone.

Eva Beaupre, a first-year psychology student at Carleton lost her father nearly three years ago. As I explained to her that sometimes I want to pick up the phone to call my mom, even just to tell her about my day, I found her response a little disheartening, but a useful warning.

“That doesn’t really go away,” she says.

My roommate, Emily Rowe, a science student at the University of Ottawa, lost her dad to brain cancer three months after my mom passed. She once described her relationship with her sick father as a “team.” When she thought about his passing away, she feared there would be no team without its captain.  I had never really thought of it that way before, but I think my mom and I were a team too. 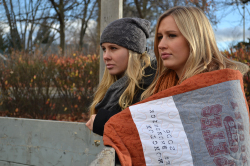 The lack of my mom’s presence could not be more apparent. When I phone home to my sisters it pains me to hear that my sister Alaina has cooked dinner, cleaned, made lunches for school, and is now behind on her homework.  My other sister, Jill, 12, is struggling to get her homework finished for tomorrow. I wish I could be there for them.

Meanwhile, my stepdad is working 7 a.m. to 7 p.m. and spends many nights a week out with friends.

Doctor Ages advises me that going out and socializing may be his way of coping, even if it’s not the best way. I just can’t help but feel hurt and overwhelmed by the changes.

On the surface, I manage to keep myself together.

I appear to be coping well.  I try to go through the motions of everyday life as normal.  The undeniable truth is that my heart still throbs and sometimes I feel suffocated by overwhelming sadness.

“It gets easier to cope with but then there’s still those days you break down because you can’t cope and you can’t handle it,” says Beaupre.  “You think ‘wow I’m actually never going to see them again.’”

My mind travels to dark corners, a blurred haze over my eyes when prompted by several happenings of daily life.

The words cancer, mom, and death create a lump in my throat. I instantly panic when I hear “See You Again” by Carrie Underwood come on.  Even watching “Say Yes to the Dress” reminds me that the best party planner I know won’t be here to plan my wedding some day.  I get trapped in my own mind sometimes and struggle to get out.

“On a daily basis I think about my dad a lot,” says Emily’s sister, Alex Rowe, a nursing student at University of Ottawa.

Despite the amount of grief and emptiness I feel, I am also reminiscent of her strength and courage, and all the things she taught me.  Among these lessons are to not let people take advantage of me, to do what makes me happy, and to never waste wine.

“I know he would want me to get up and do my best each day so he could still watch me  grow and let me be the person I’m supposed to be,” says Emily.

“What I’ve learned is to try not to sweat the small stuff, I’m trying to get better at that day by day.”

It’s difficult to see the light at the end of the tunnel. It’s reassuring to know that I’m not alone.

“Time is a good healer, but it’s giving yourself time and allowing yourself to mourn,” says Ages.  “It’s not crazy, it’s been a terrible loss.”

I suppose nobody is ever really ready for something like this.  No matter how realistic your mind tries to be, something in the heart tells us to believe in a miracle.  It feels sudden no matter what.

At the end of the day, I have realized that there will probably be very few experiences in life that will affect me this way.

My mom will always be my missing piece. I guess in the real world, you can’t always be saved by superheroes. And sometimes the ones you look up to are the ones you have to let go.