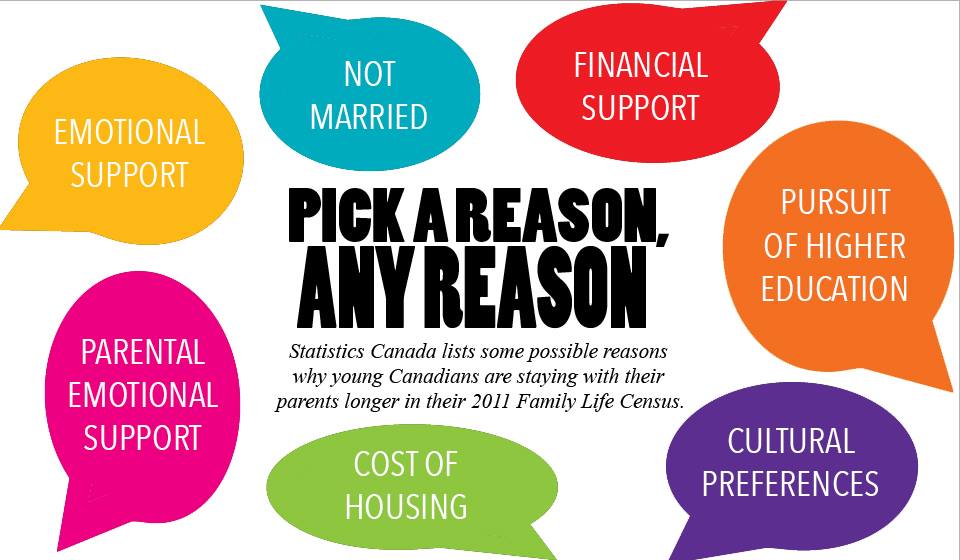 “Hi, my name is George. I’m unemployed and I live with my parents.”

This George Costanza one-liner may have earned a few laughs on the 86th episode of Seinfeld, but it’s also fitting when summing up where young men are today.

Young adults in general are leaving their parents home later, but findings from Statistics Canada show that young Canadian men between the ages of 20 and 29 are more likely to stay with their parents longer than young women.

According to the 2011 Census of Population, 42 per cent of young Canadian adults still live with their parents, a 12 per cent increase since 1981. Sixty-three per cent of those living at home are young men.

A newly defined stage in life known as “Emerging Adulthood” may be able to explain why the millennial generation has a hard time letting go.

Andrea Howard, assistant professor of psychology at Carleton University, defines it as a transitional phase between the ages of 18 and 25 where an individual is no longer an adolescent but has not yet reached adulthood. Features like self-discovery and lack of commitment to societal roles are often associated with the phase and have caused a delay in the transition to adulthood.

And according to one theory, a midlife crisis-like phenomenon may be the reason men tend to stay with parents longer. Because they measure their life’s success with professional achievements, men are influenced by what happens (or doesn’t happen) in their careers. When they are unable to achieve their career aspirations, they accept their lack of success and settle for what they have.

But for Curtis Kupkee, a radio broadcasting student at Algonquin College, convenience and comfort are what’s keeping him home. “They feed me and give me parental love,” says Kupkee. “So it’s a good deal. But there’s no privacy. Well, there is, but not as much as one would like.”

Although Kupkee hasn’t started saving up for his own place, it’s not for lack of trying. The 20-year-old finds himself in the same financial situation as the other 12 per cent of unemployed college and university graduates in Canada. “I have no money to save. The lack of job really does that,” he said. “But as soon as I do, oh goodness, you bet [I’ll have my own place].”