It’s 8:20 a.m. on Feb. 5 in the dimly lit Pressed café, a mere few minutes since the winter edition of the Ottawa Zine-off began and already 24-year-old Jessie Huggett has come back to her seat on the plush couch with a handful of others’ work.

In front of her sits a dozen copies of the first zine she’s ever made. It’s called speak, with a hand-drawn self-portrait on the front, a true depiction of what’s inside.

“My zine is about me, my life and it’s about having Down syndrome. Really, it’s about advocacy,” said Huggett with enthusiasm, before bouncing up to trade her creation with more zinesters. 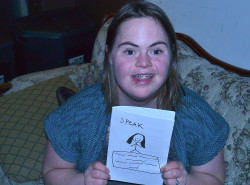 “There’s a side of zines where people feel a bit of freedom to really express who they are and to get some things out there and make themselves vulnerable and therefore accessible to other people and more honest in that way,” said JM Francheteau, co-organizer of the event.

But Huggett’s sets itself apart: from sharing her experience growing up feeling different and her frustration in hearing the “R” word, to finding a way to dance through life and finding inclusion.

“I wanted to make a zine because I wanted to educate people on what it’s like living with Down syndrome. I wanted to inspire other people. I want my zine to say okay, this is who I am and although I’m different and I have a disability, I’m still a person.”

Huggett is an example of how self-supportive and rapidly growing the scene is in Ottawa. This event was the fourth to be held and with each, the turnout keeps multiplying.

“Each time there’s been more and more people and all of a sudden it’s become a real thing, it’s been nice to meet all these people.”

Zines in essence, are small self-published magazines crafted by hand and reproduced via a photocopier. They include text, poems, illustrations and photography. They are designed to be shared with ease and that’s something Lily Pepper, Pressed’s zine rack organizer has pounced on. After seeing a rack displaying and selling in a shop she frequented in Montreal she kept wondering why Ottawa didn’t have one.

“And then of course someone said to me, obviously, you could be the person to do it here, and so I did,” said Pepper.

Zines that were created for the event differed in medium and in message. From a couple’s chronicling of moving to the country titled Shit just got Rural, to a zine CD of audio poetry.

When asked before the event, “what makes a good zine?” Francheteau said

“Do something that is real. Those are the zines that, even if it’s not put together nicely… people make a connection to.”

By distributing all the copies of her zine within the first hour of the event, it’s safe to say Huggett’s brave, unique and purposeful zine did just that.

To read more of Huggett’s zine Speak, check out the slideshow below.