I was lost, though, so I turned to the nearest person and smiled.

“Excuse me,” I said to the man in a Knicks jersey, “could you please tell me how to get to Union Square?”

But instead of directions, I got laughter. “You’re from Canada?” he asked. “I love Canada, eh!”

That was the story of my life for the first portion of my summer in 2010 in New York City as a student: laughter and imitation. Sometimes I didn’t even have to speak. I would be walking down Broadway and a dozen bag vendors would be all over me.

I couldn’t understand why I was sticking out like a sore thumb. It was as if I had “Canadian” written in maple syrup across my forehead.

Whatever it was, I had all summer to figure it out.

Statistics Canada, MSN Travel, Huffington Post Travel and TripAdvisor.ca all say it: New York City is the top destination that Canadians most frequent, next to Florida. In 2010, Statistics Canada reported over 3.4 million overnight visits to the city and $1.3 billion spent by Canadians.

The appeal of the city is different for everyone, but one thing remains certain for all NYC-bound Canucks: we stick out of the crowd.

Three years and nine visits later, I’m almost undetectable. I’ve even come to a point where people ask me if I’m from the city. This makes me smile every time.

But for other Canadian travelers to NYC, like criminology student Kassy Wilkinson and communication’s student Jane Lytvnenko, their moose antlers still show.

With help from newbie visitor Kassy and intermediate explorer Jane, Glue Magazine has put together this guide for all of you flaming Canadians looking for a unique and hassle-free visit to the Big Apple.

Jane: Taxis are your friend

I like the taxis. It sounds typical, but last time I was there our taxi was standing at a red light. The passengers in the taxi next to us rolled down their windows and started a conversation. They ended up pointing us to a great destination to go to. It was fun.

Despite the common concern of some Canadians, New Yorkers are actually very nice people. Anytime I asked for directions, no one hesitated. Some even drew me a map or walked me if my destination was close by.

They’re also some of the most interesting people. The city is one giant schmorgesborg of fascinating folks and you never know who you’re going to meet. I once ran into Victoria’s Secret supermodel, Selita Ebanks, on Park Ave. outside of California Pizza Kitchen. I didn’t recognize it was her at the time and we struck up a small conversation that started with a compliment from Ms. Ebanks herself. It was only when I sat down and looked in my Victoria’s Secret catalogue that I realized it was her.

My least favourite thing was probably the tour itself, it was very rushed and I would have loved to spend a little more time. New York is something you have to do one attraction at a time, and spend a sufficient amount of time at each one. Being on a tour we were on strict timelines.

Do not go on a tour. Yes this is cheaper but you will miss out or not spend as much time as you want at different locations.

Nothing beats getting massaged by a hot tub while sipping on a rum and coke at a rooftop bar. NYC has something for everyone. There are places you won’t find in Ottawa or nearby  – like a rooftop bar with a hot tub. It’s big and unique but personal.

Always pre-drink. You’ll need liquid courage if you want to make your stay an adventure and it doesn’t come cheap in NYC bars.

There is nothing more annoying than someone in a rush being cut off by a wandering idiot with an “I ❤ NY” t-shirt.

If you really want to look up at the buildings and snap some photos like a typical tourist, please step off to the side and do so. There are a couple advantages for doing this:

1.      You avoid getting hit and getting a whole lot of people angry.

2.      It’s one less opportunity for you to get pickpocketed.

Pickpockets aren’t just in New York City, people. They’re anywhere where there are large crowds, and NY is full of large crowds.

Kassy: Be prepared for new experiences

I would say if you are not from a large city in Canada, be prepared for the amount of people who are in New York, especially in Times Square and other big destinations.

Also, step outside of your comfort zone and try something new, especially the food. New York City has so many things to see and offer, and people should try to experience everything they want to. 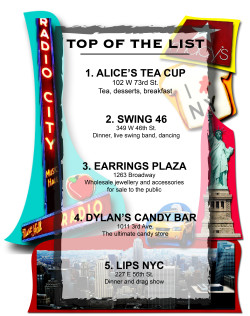