The printers construct objects with layers of PLA, a corn based plastic that shoots from a spool at the back of the machine and runs through a heated nozzle, much like a glue gun.

Fenton demonstrated using Foxy Cleopatra, and some guests went home with little owl figures that had been created before their eyes.

Emerging electronic artist, Britta Evans Fenton kicked off this season hosting Girl Geek Dinner in the market at the Black Tomato on Oct. 24.

Girl Geek Dinners are get-togethers where people pay a small fee to sit in at local restaurants and listen to accomplished women describe their experiences working in a technology based atmosphere.

They offer an informative and welcoming learning environment where guests can discuss new innovations and ideas with a different host at each meal.

The dinners are gaining momentum, with more than 30 people attending on average, typically run from October to June.

Samantha Hartley, one of three coordinators who have been running Ottawa’s branch for two years together said, “The goal of these get-togethers is to make technology accessible and interesting to all age groups and all people, particularly women.”

Fenton, 24, has works shown in the Ottawa Art Gallery, Gallery 115, Interaces (Toronto) and was commissioned for Nuit Blanche Ottawa + Gatineau 2013.

She graduated with a BFA at Ottawa University and is now the Technical Coordinator at Artengine, a charity organization that fosters equipment for artists or curious minds to explore engineering.

Fenton described her work environment at Artengine as a helpful hacker space. 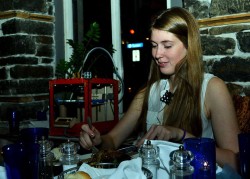 “People have it in their brain that hacking is stealing peoples’ money from bank accounts online, and it’s really not,” said Fenton.

“I like to say hacker space because I get a better reaction from people, than if I say ‘I work for a maker space,’ they entertain what making is and they just assume it’s a craft room.”

Artengine is an artist run site in Ottawa where designers can go to explore technology and ideas they may not have the space or money for on their own.

“It’s a safe clean workshop space where people are friendly and willing to help you,” said Dianna Cantu, a member of the Board of Directors, who suggested Fenton as a host to the Geek Girl Dinner team.

Through Artengine, Britta hosts Modlab nights every Wednesday evening and workshops every second and fourth Thursday of the month that allow public interest to come browse, connect with people and work with the tools for free.

“It really provides so that artists and designers can go with the times and use tools that they typically wouldn’t have access to, even just financially themselves. 3-D printers are a $20,000 purchase.”

“It’s not only 3-D printers, we also have projectors, lots of cables, tools, sundering irons. My favourite resource that we have at Modlab is the people,” said Fenton.

Attendees had an exclusive chance to learn about the intricate functions of a 3-D printer and see how it works up close.

Fenton brought along one of Artengine’s 3-D printers that was painted red and nicknamed Foxy Cleopatra.

She joked about a literal family of 3-D printers; as she explained that some printers are now technically advance enough to fabricate parts for other printers.

Guests participated in a quick do-it-yourself project, where they attached LED lights to flat surfaced batteries with tape, so they would stay lit up.

Fenton told stories of how other art-engineers are involving themselves in the Maker Movement, a free global campaign that is encouraging artists to use small projects in order to make a big statement.

Maker movement is not owned by anybody. It’s an idea for people to jump onboard with.

“It’s an evolution of millions of people who are starting their own projects, creating their own businesses, making and selling self-made products,” wrote Hartley on the Geek Girl Dinner website.

“There was a trans in some European country, basically a hundred people came and attacked the trans during this festival with all of these LED attached to magnets and just threw them all on this trans, and for the rest of the night it was glowing throughout the city,” said Fenton.

Well known in the Maker Movement of Ottawa, she is also a co-organizer of the Ottawa Mini Maker Faires. They are venues where experimenting tech-artists display their recent works for the community. Fenton shared pictures from the last one which was held in September 2013.

“It’s nice to find out about local art scene and expand peoples’ mind on what is out there,” said Jessica Eldredge, a business woman working with the e-commerce platform, Shopify, who recently moved from Washington to Ottawa.

Elgredge attended her first Girl Geek Dinner this night with a group of friends who had found the event on Twitter and won two tickets to any performance at the National Art Center from the raffle.

“I am really excited about it all around,” said Eldredge.

“It deserves to be recognized.”