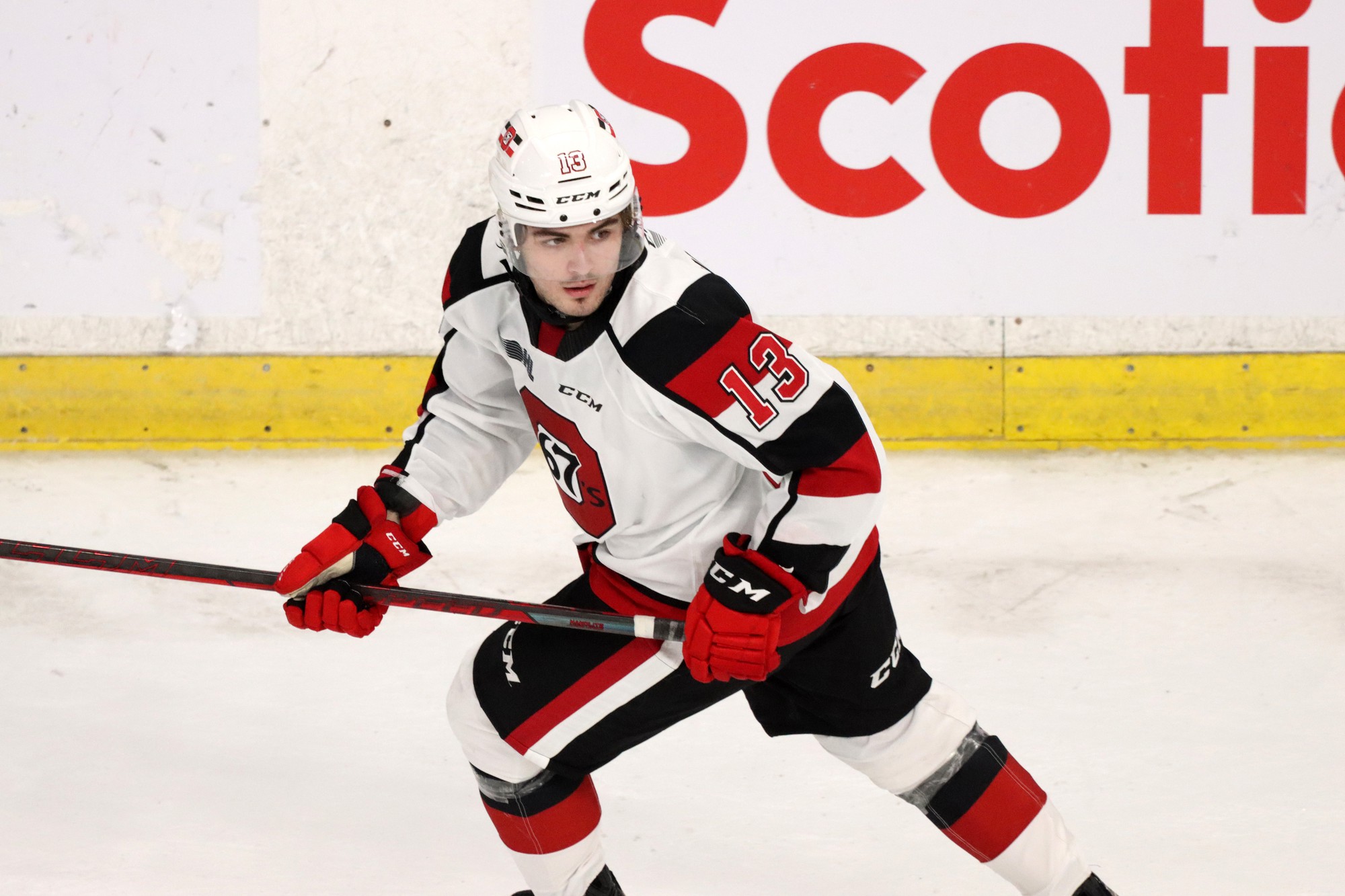 It’s not every day that you see a high pick in the NHL Entry Draft playing at your local arena.

Occasionally, the Ottawa Senators of the National Hockey League team up with the city’s Ontario Hockey League team, the Ottawa 67’s and pick one of their players in the draft, but the most recent example of that is a bit of a different story. Tyler Boucher committed to Boston University before being drafted by the Senators in the first round of last year’s draft, but there was more to his commitment than hockey.

“Growing up, I’ve never thought of anything but college,” Boucher recalled. “I have family in Rhode Island so I’m kinda in that area, and I always just wanted to play near them. It was always a dream to play in Boston.”

“When you’re committing you want to look at it from both sides,” he said. “You want to make sure you’re getting the most out of your time and BU is a great school academically.”

After just 17 games with the Terriers, Boucher decided it was time to move on.

“I want to be a hockey player, that’s what I want to do.” 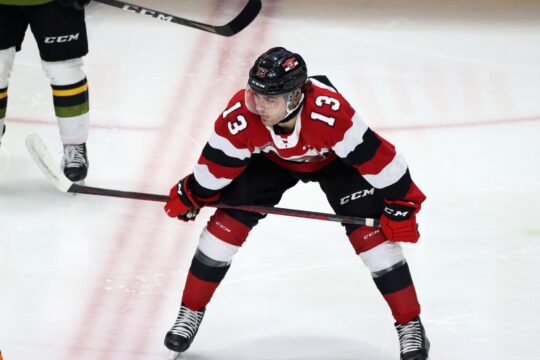 “When you’re playing junior, hockey is your only job,” said Boucher. “At BU, your focus is for sure hockey, but at the same time, you have other things to take care of.”

On December 28th, 2021, the Senators announced that they had signed Boucher to a contract, meaning he was no longer eligible to play NCAA hockey.

“Having a chance to watch quite a few of his games and after one weekend, Tyler and I had a really good conversation with Shean Donovan and he was pondering leaving. We told him that whatever decision he would make, we would respect, which was very important for us,” said Senators general manager Pierre Dorion.

“[The Senators] understand the last little bit hasn’t been easy for me,” Boucher said. “They have been in full support and Pierre has been great. He’s supported me every step of the way and he shows that they will stick by me, and that’s what they did.”

Not only was the move a good one for Boucher and the Senators, but for a 67’s team who was struggling and missing a few veterans of their own, they were adding a huge piece to their team at no cost.

“It’s not a situation where we have been texting Tyler trying to convince him to leave school,” said 67’s general manager James Boyd. “This is something where the Sens stepped up, they wanted to sign him and obviously with us having his junior rights and being right in their backyard it made sense.”

It was once again going to be new surroundings for Boucher who had never been to Ottawa before, but after about a month of living in the city, the young forward says he’s happy where he is at.

On the ice, Boucher brings a tough style of play to the table and is exactly what the 67’s have been looking for this season.

“He’s a big guy who hits like a truck,” Boyd said. “He’s the quintessential power forward, so he’s able to impact the game in a number of ways that you don’t see on the scoreboard.” 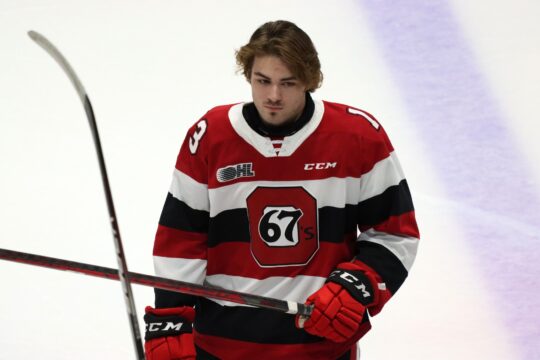 “I think my style of play is pretty rare,” said Boucher. “I play a hard, heavy, power forward kind of game and I think I play with skill, I play with an edge.”

Boucher’s first game with the barber poles lasted just 12 minutes. He was injured again with an apparent shoulder injury. Despite that, he was excited to have been back on the ice again.

“It’s hard missing time,” said Boucher. “It’s something that I have been battling for about a year and a half now, it’s a part of hockey. I feel good to be back and it’s nice to play a home game, I’m thankful to be here. We’ve got a real good group of guys and the best is ahead.”

He has since returned, and when he hit the ice again, he didn’t have the immediate impact that some thought a high draft pick would have, but he warned that it could take some time.

“Coming to a new team, it takes some time to gel. I think coach is trying to find some lines that are working and he has mixed it around, but everybody is a good player,” Boucher said.

In the few weeks he has been back on the ice, Cameron has found him a line that works. He has been playing with veteran forward Cam Tolnai and Calgary Flames sixth-round pick Jack Beck. Since being put with those two, Boucher has found success at the top of the lineup. 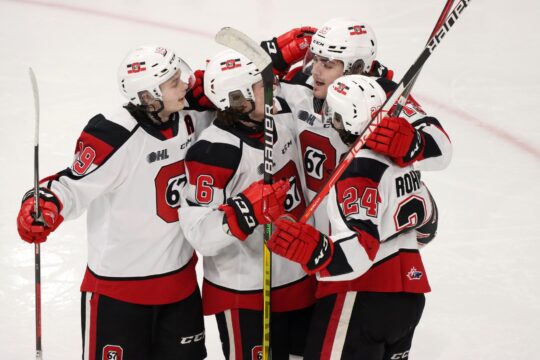 “We’ve got some great guys in the room,” said Tolnai. “Playing with Boucher and Beck has been great. We find each other, we create a lot of offence, and we all bring something different to the game and that does well for our line.”

“Boucher and I sit beside each other in the room and then Beck is roommates with Boucher so [we’ve been] gelling in the room and outside of the rink,” Tolnai explained. “They are great players so it’s easy to play with them.”

Playing with the 67’s is about developing for a potential future with the Senators, however. It’s important for Boucher to take the next steps in becoming the player the Sens hope he will be, and he knows what that is going to take.

“I’d like to see me produce a little more offensively,” he said. “I think I have it in me.”

So far, the offence has been there. Boucher has played just eight games with the club, but already, he has scored three goals and five total points. As they push for the playoffs, Boucher should only become more involved in everything the team accomplishes.