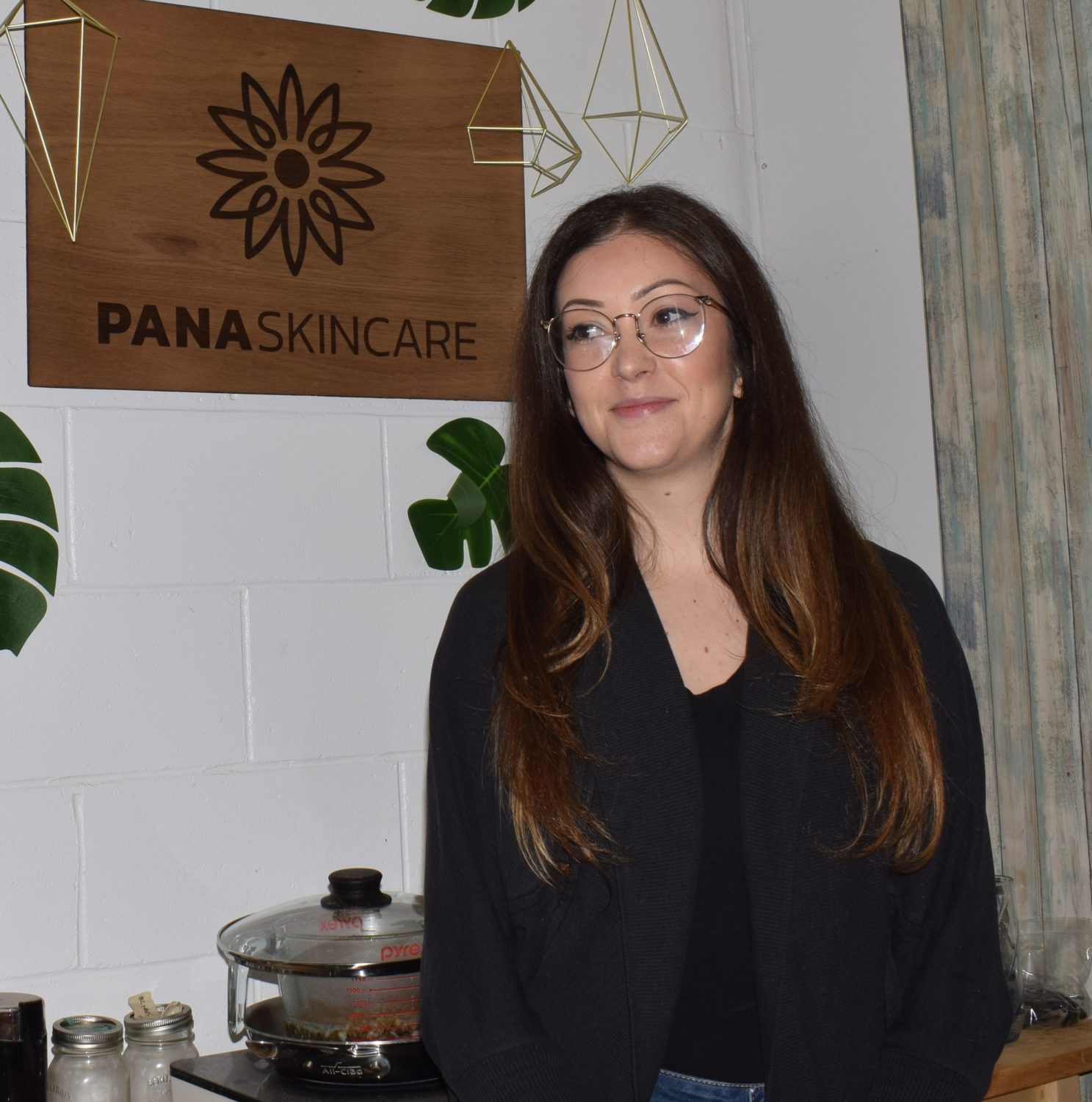 Rebecca Hollander describes herself as a maker with a day job.

In a tiny cubicle — one of many located in MakerSpace North — she works on her vegan, cruelty-free products. In this space, she creates whipped soaps, facial serums and lotions, just to name a few.

The idea of a skin-care line came from creating simple products for friends and family.

“I’ve been kind of making my own skincare stuff since I was about, 16 or 17,” said Hollander. “I would make soap, I tried making shampoo and I still haven’t figured out a good recipe for it but I just like making stuff by hand and learning about the ingredients,”

By learning on her own, made her more curious to understand the chemistry behind the products.

Building her company from the ground up wasn’t easy. Hollander describes the process as being a “slow activation”. She currently works a full-time communications job so, in the beginning, that was her main focus.

Now, however, she’s learnt to balance her time between her day job while spending most of her time in MakerSpace North.

MakerSpace North is home to many workspaces as well as many creative companies.

MakerSpace Director, Adam Wilk says that this space is open to anyone. “We’re not your traditional incubator [space],” said Wilk. “We don’t create programming for students but rather we find good people who work hard.” Wilk was also an entrepreneur before he became the director of the space. As a director, he is now focused on providing spaces for a diverse community of companies, one of being PANA Skincare.

“Being here has been amazing and [selfishly] a really fun way to just meet people and make connections with people,” said Hollander. “It’s people who are actively doing things to engage themselves.”

Hollander grew up in Ottawa for most of her life but completed her degree in the design and advertising program from the Ontario College of Art and Design (OCAD) in Toronto.

She recalls when she first launched her products, customers were surprised by the local aspect. In Ottawa specifically, she also noticed there is a demand for locally-grown products.

The price of her products starts at nine dollars, ranging from face masks to scrubs.

When she started PANA Skincare (with her ex-partner), she didn’t have a solid business plan.

“We kind of just made it up as we went along in the beginning and then it became more serious once we started getting down to numbers and costs and weighing out the expenses,” said Hollander. “It was kind of like an organic process when we realized once we had [a demand] for our products we started getting more serious.”

At the start, she started making “body bombs”, made from candlewax and shea butter, which helped treat dry skin. Shorty, thereafter, she created lotions which became more in demand because of its non-greasy texture. The demand for her products made her more curious to learn how to “formulate” different products.

Hollander is occasionally able to buy her products through Instagram, which are imported directly from Ghana or Peru, depending on the ingredients. Most of her ingredients though are usually sourced from Coop Coco, located in Montreal.

Though the shipping on products can add up, she says that it’s better to know where they’re directly sourced from, rather than buying in bulk with poor quality ingredients.

“I was getting [shea butter] from like a local spot in Ottawa. And it was really like grainy and dry,” said Hollander, adding that she assumed that that was the ideal texture. “Until I went to a Caribbean store on Bank Street, it was like this soft dough, like magical texture.”

Depending on the product that she is trying to create, there is an ample amount of time dedicated to her craft. One of the things, she has to be aware of is the heat and cooling consistency.

One of the techniques that she uses is called “burping” that in turn makes the consistency of the materials smooth. “If you don’t do that, then bubbles form like crazy and then you run the risk of capturing little pockets of air which are likely to not turn out so good.”

The competition that she faces as a local business owner is still something she is learning to work around. The aspect that makes every business different is the audience and perhaps the products, however, she is already thinking about what’s next.

“Some of the things I’m going to do differently [is] to create more content,” said Hollander. “So I want to start writing blog posts that have an educational component to it. So it’s like,‘this is why I use these ingredients and [this is] why they’re good for you,’”

Though PANA Skin Care has been around for roughly two years, Hollander encourages entrepreneurs to just go through with an idea if they plan on starting a business.

“I would suggest [it’s] definitely good to have a plan going into it,” said Hollander. “But also expect to learn a lot on your feet. Don’t be afraid to have a good idea,”

She is currently located in MakerSpace North in Unit 216.