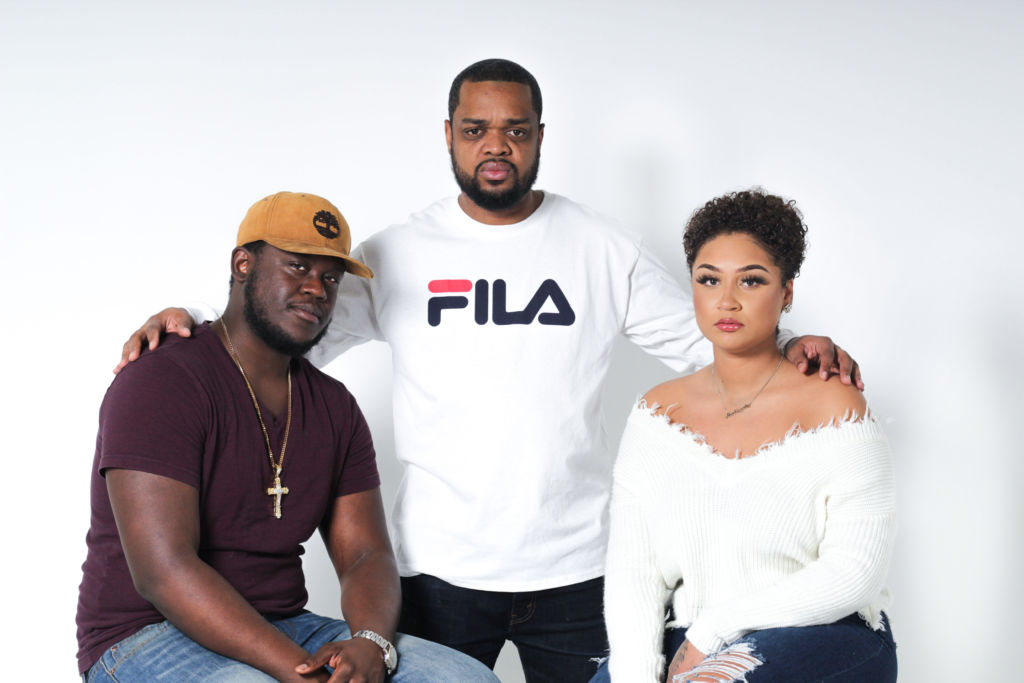 Looking around the bright white studio, with three co-hosts and a five-person crew working in-sync to shoot and record a podcast, it’s hard to picture the Shifters ever operating any other way. However, Kevin Bourne, the brand’s co-founder, recalls such a time vividly.

“Originally Vlad, myself and another team member named Lisa used to shoot something similar in her basement,” he says. “That was our humble beginning. We took the same concept and made it more hip-hop focused.”

Bourne and a business associate were discussing formats when the idea of podcasting came up. Now, he hosts it alongside Vladimir Jean-Gilles, also known as Vlad Ayiti and Jamequa Jordan who goes by LJ.

Though the project is among his most recent ones, Bourne is no rookie to the game. In 2013, he co-launched Shifter Magazine, an online publication dedicated to entertainment reviews and articles touching on pop-culture and current events. Since then, he also co-founded a PR and marketing firm named Shifter Agency.

Much of Bourne’s work revolves around supporting local artists, something the Toronto native feels Ottawa isn’t doing enough of. He even shared his thoughts on the matter in an article for the Ottawa Citizen.

“In the beginning, in Toronto, we didn’t listen to Toronto artists,” he says. “In high school, if you listened to that music, the response was: ‘What’s wrong with you? Our music is wack. Canadian music is wack.’ Over time, I got to see the city change and start to consume its own music and how now, you can be a Toronto artist and be a bit of a star in your own city.”

He’s brought this idea to Ottawa. “That’s what I’d really like to see here,” he says. “I’d love to see Ottawa artists get to commercial recognition in their own city, so they can at least either build a career here or have it be a launch pad for them to go somewhere else. I want to see Ottawa artists be able to make a living with their craft.”

With Jeff Leiper announcing plans to turn Ottawa into the next Music City, the Shifters might just get their wish. To turn this dream into reality, they’ve been using their platform to help boost local artists. Through it, they’ve featured R&B singer Maurice Moore, as well as rappers Hevve and Waxx, who is the son of NWA’s MC Ren.

“Maurice has to be my favourite,” Jordan says when asked which guest was most memorable to her. “I know him and his sister personally, so I really wanted to sit down and hear everything about his music because he’s come a long way since being in Ottawa, to Toronto and now being in the States.” Moore now resides in L.A.

For Jean-Gilles, a University of Ottawa communications student, it was the opportunity to meet the son of a hip-hop legend that made a mark.

“Waxx and Hevve were our first guests, so that’s something I go back to when I message [Bourne] about it,” he says. “For me, the things that happen before production are very telling of whether or not we’re going to have time a good time and how we’re going to have to tackle the interview. It just gives us a bit of insight. The moment he sat down we started shooting the shit and I thought, ‘Yeah, this is going to be fun.”

When the trio isn’t conducting interviews, they can be found commentating on the latest celebrity developments or reviewing musical projects from the likes of Meek Mill, J. Cole and Travis Scott. When it comes to local talent, however, the Shifters make it a point not to post reviews that might harm a budding artist’s career. Although the intention behind the action is good, the response to it, isn’t always.

“I’ve definitely gotten Instagram messages from artists saying, “How come I wasn’t on that list?” And I’ll say ‘Well this is my criteria. This is what I’m looking for,'” Bourne says. “When you look at big city markets, the media is very honest with people. Within Ottawa, it’s still a community and not yet an industry, so people expect you to coddle them and say, ‘Great album!’ As Ottawa matures and becomes a big city, they need to expect people to say, ‘Listen. Your album sucks.’”

“We didn’t get into this to bash other artists and stop them from doing what they want to do,” he says. “That’s where we have to be responsible too, because our voice, especially here in the city, it’s pretty loud.”

Instead of getting riled up over pushback, the Shifters choose to look to the positive instead. When asked how they feel about the artistic growth Ottawa’s seen these last few years, they couldn’t be happier.

For Jordan, it’s a testament to the fact that despite the growing number of podcasts popping up within the city, each one brings something unique to the table.

While it may seem like their focus is on music, what the Shifters truly want, is to help elevate their city.